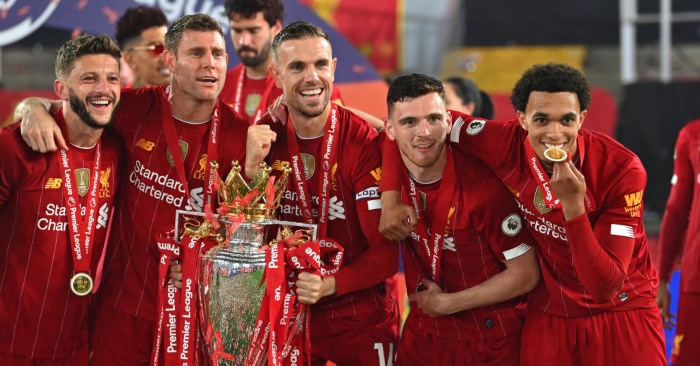 As talk turns to whether Liverpool can go again next season, we look at the best three-season points hauls in the history of the Premier League. Nobody has ever breached 90 points three times in a row – Manchester City have fallen well short – and that’s what Liverpool would likely have to do.

We have not included 42-game seasons or any overlapping spells…

That these were the last three seasons of Sir Alex Ferguson’s reign and United have only once since breached the 80-point mark – and are currently patting themselves on the back as they target a possible total of 70 points – is pretty damning. That three-season run delivered two titles and one heartbreaking failure on goal difference.

One interesting aside is that Ferguson clearly thought he needed to improve on that first 89-point haul to win the title, so invested heavily in Robin van Persie. He was brilliant that season but United actually scored fewer goals (and conceded more) but still matched that points haul while City fell off the pace. The very next season United finished with 64 points. Ooft.

While their first three-in-a-row reaped only 250 points, this was different; Manchester United had to improve to keep up with the new power of Chelsea. And they improved not by buying players but by selling Ruud van Nistelrooy and placing faith in Ronaldo and Wayne Rooney. Add Carlos Tevez and United had put together their greatest striking trio.

What happened next? Ronaldo left and that was enough to allow Chelsea – now managed by Carlo Ancelotti – to win the title. United could not keep up that kind of pace without one of the world’s greatest players, oddly enough.

Ah, the classic third season for Jose Mourinho, with friction developing within Chelsea not helped by the £30m signing of Andriy Shevchenko at the owner’s behest. Having swept to the title in his first two seasons, Mourinho lost his sparkle, the team lost their edge and Chelsea contrived to draw 11 games and end up second behind a Manchester United hitting the first strike of their title hat-trick.

Let’s not pretend they have not spent to record such a ridiculous improvement – a 22-point leap in one season is truly astonishing – but this season’s exploits have had continuity rather than extravagance as their hallmark. They fell just short of the 100-point mark, which is a shame as this brilliant Liverpool side probably deserved some kind of record.

Minds now inevitably turn to next season and whether Liverpool can become the first team to breach 90 points for three successive 38-game seasons. This is now Jurgen Klopp’s greatest challenge.

This illustrates just how difficult it is to produce three extraordinary seasons in a row; United only managed when they had an extraordinary footballer coming into the peak of his powers.

Pep Guardiola has spent over £700m on players while at Manchester City and has been rewarded with two magnificent seasons, but a third became impossible because the spine of his great but ageing team was not replaced quickly enough. Not buying a centre-half last summer now looks truly negligent and leaves him with a rebuild squeezed into one summer.