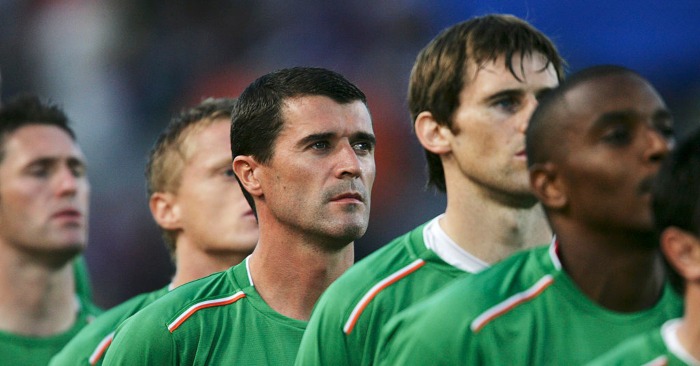 An Irish Premier League XI, you say? This is one hell of a team. Wales and Scotland have no chance…

Goalkeeper: Shay Given
The clear choice for this position. A Newcastle United legend with over 130 caps for his country, Given enjoyed an international career that spanned 20 years. Given’s service to the Magpies went by without a trophy (Intertoto aside) as Newcastle missed out in the FA Cup finals of 1998 and 1999. Purchased by Manchester City in 2009, Given was one of the first signings of intent by a club on its way to becoming a real force in the Premier League. Despite eventually losing out to Joe Hart for the number one spot, Given finally got his FA Cup winner’s medal as back-up to Hart in the 2011 final.

Right-back: Seamus Coleman
Coleman cuts the mustard at right-back ahead of some stiff competition. Stephen Carr, Steve Finnan and Gary Kelly were all in contention. Although the Everton star called himself “crap” last season, Coleman has been a fantastic servant for the Toffees for over a decade and continues to play for the national team. To think he was signed from Sligo Rovers for just 60,000 English pounds.

Centre-half: Paul McGrath
My Lord, what a player. With his eroding knees and drink problem, Paul McGrath was considered a risky signing for Aston Villa from Manchester United in 1989. As it turned out, United’s loss was very much Villa’s gain and despite the Red Devils pipping Villa to the title in the inaugural Premier League campaign, McGrath won the PFA Player’s Player Of The Year that season. McGrath finally got a measure of revenge on his former employers the next year as Villa beat United in the League Cup final. Despite his injuries, McGrath carried on playing at the top level until the 1996-97 season.

How paul McGrath hasn’t gotten a statue on O’Connell street yet I dont understand, that performance against Italy has to be hands down the best individual performance ever by any player in an irish shirt #TheBoysInGreen

Centre-half: Richard Dunne
Another former Villa defender gets the second centre-half spot, just about edging out Irish legends David O’Leary and Kevin Moran, who were approaching the end of their careers in 1992. The Premier League champion of own goals, Dunne made his name at Everton before joining Manchester City in 2000. Despite missing out on the club’s glory years, the Dubliner won City’s Player Of The Season award multiple times before Garry Cook decided he wanted more star names in the squad.

Left-back: Denis Irwin
Steve Staunton and Ian Harte were both fine options at left-back, but seven-time Premier League winner (and first Irishman to win the competition) Irwin gets the spot. After only making one mistake in ten years according to Fergie, Irwin was not only reliable in either full-back slot but also deadly from set-pieces. Irwin retired from international football in 1999 but carried on at at club level for another five years, playing for Wolves in the Premier League at 38 years of age.

Right wing: Damien Duff
A century of caps, two Premier League medals and two League Cup wins (and that 2006 Intertoto win, yes Shay) is more than enough to cement Duff’s place in this team. As well as starring for Mourinho in his halcyon days as Chelsea manager, Duff was also part of that famous Fulham run to the 2010 Europa League final. Duff can look back on a highly successful career in the Premier League; even Claudio Ranieri’s mum loved him.

Central midfield: Roy Keane
No question about this man’s inclusion in the team, providing he doesn’t tell us to stick it up our balls….to put it politely. After playing under the iconic Brian Clough for Nottingham Forest in the Premier League’s maiden season, Keane made the move to Manchester United and the rest is history. A double winner in his debut season, Keane took over the club captaincy after Eric Cantona’s retirement, leading United to the treble in 1999 (see many, many quotes about a captain’s performance in the Champion’s League semi-final). Younger viewers may see Keane as a sometimes snarling, sometimes smirking punditry figure, but the combative, competitive Cork man is one of the Premier League’s finest ever players.

22 – Nottingham Forest’s Roy Keane featured in the 1992-93 PFA Team of the Year, the last player to do so for a side finishing bottom of the Premier League table. Rock. #OptaPLSeasons

Central midfield: Andy Townsend
Matt Holland, Jason McAteer? Not for me, Clive; Townsend gets the other central midfield spot. The 1994 World Cup Irish team captain also played his part in the famous side that reached the quarter-finals in Italy four years before. Townsend lined up in the famously feisty group stage match against England in 1990 and scored one of the spot-kicks to see the Irish through against Romania in the second round shoot-out. In the Premier League, Townsend played for Chelsea early on before moving on to Aston Villa to became a key member of the League Cup winning sides of 1994 and 1996 (as captain).

Left wing. Kevin Kilbane
325 Premier League appearances spread between four clubs and 110 caps for Ireland, Kevin Kilbane may not be as thrilling as his right-wing counterpart in this team, but his longevity in the Premier League just about beats Ronnie Whelan to a spot on the left, who was nearing the end of his top-flight career by 1992. After making his Premier League bow for Sunderland at the turn of the century, Kilbane was still turning out for Hull City in the competition over a decade later. Although not fondly remembered at The Stadium Of Light after his two-fingered salute, Kilbane had a fine spell at Everton under David Moyes, helping the club to a fourth-place finish in 2005, ahead of Merseyside rivals and European champions Liverpool.

Striker: Niall Quinn
Sorry Jon Walters, but we can’t have you and Roy Keane in the same side. A member of three Irish squads at major international tournaments, Niall Quinn played for a slightly less successful Manchester City side in the early Premier League era. Having lost his place in the Arsenal team in the late eighties, Quinn was a prolific goalscorer for City in the early nineties before joining Sunderland after the Citizens were relegated in 1996. Quinn also suffered relegation on Wearside but stayed with the club, helping them spectacularly bounce back to finish seventh in the Premier League in the 1999-2000 season, forming an unforgettable little and large partnership with Kevin Phillips.

Striker: Robbie Keane
Who else? Ireland’s record appearance holder and record goalscorer, Robbie Keane was the only outfield player from Ireland’s 2002 World Cup squad to make Euro 2016. Anyone who can remember Keane bursting onto the scene for Wolves – before making enough of an impact at Coventry City in the Premier League for Inter Milan to sign him – will undoubtedly feel old right now. Keane’s spell at Inter was short-lived and it was at Tottenham Hotspur where Keane reached legend status after a period at a Leeds United side gradually sinking into near-oblivion. By far and away the most prolific Irish goalscorer in the Premier League’s history, Keane bagged 126 goals in 349 appearances.
The only remaining question is who will manage this side. Would you want to see David O’Leary back? Do you go safe with Chris Hughton? Go sweary with Joe Kinnear? It’s got to be Big Mick surely…just to see the look on Roy’s face.