Home F365 Features Cup of sugar: One kid per PL club who needs a January loan 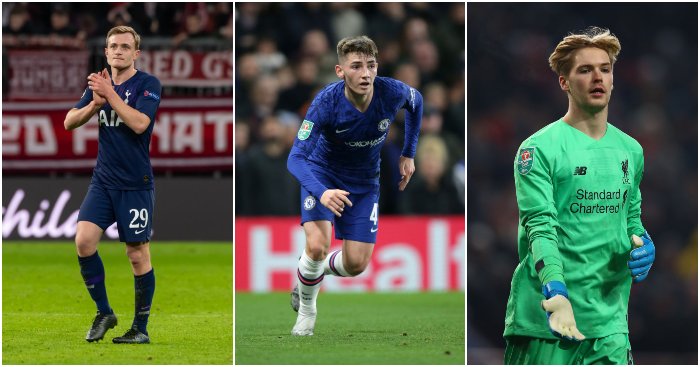 Although it seems as though Swansea have a monopoly over Premier League youngsters, they actually don’t. There are plenty of players around with little chance of first-team action who would do well to get some experience by dropping down a division or two. We bring you one from every club – no older than 21 (with one exception) – who need some football…

ARSENAL: Folarin Balogun
Eddie Nketiah was going to Bristol City; now he’s not. A wise move given potential game time in the FA Cup and even the Premier League, particularly short-term with Pierre-Emerick Aubameyang’s suspension. Nketiah staying means 18-year-old Balogun drops down the Gunners’ pecking order. Are Bristol City picky? Or will any Arsenal striker do?

ASTON VILLA: Jacob Ramsey
Six goals and four assists in 12 appearances for Villa’s Under-23 side highlight the reigning Academy Player of the Year’s quality, but his four minutes in the FA Cup loss to Fulham will likely be his last taste of first-team action this season. A little loan to a League One club would do him some good.

BOURNEMOUTH: Corey Jordan
It would appear ludicrous for Eddie Howe to send anyone out on loan given the Cherries’ injury crisis and their seemingly imminent relegation. Sam Surridge has been recalled from his loan spell at Swansea and goal-shy Dominic Solanke has started the last four games – it really is all hands on deck. But Corey Jordan – who spent last season on loan at National League South outfit Eastbourne Borough – may just be a hand Howe can do without.

BRIGHTON: Tudor Baluta
Having apparently turned down a loan in the summer, it seems unlikely that Romanian Under-21 captain and full international Baluta would turn down another loan opportunity in January after failing to play even a minute of Premier League football this season. He may have previously harboured hopes of a first-team chance having watched Aaron Connolly and Steven Alzate establish themselves in Graham Potter’s top-flight plans, but with Brighton now out of the FA Cup, that opportunity looks further away than ever.

BURNLEY: Ali Koiki
The 20-year-old will not have enjoyed Sean Dyche describing his decision to bring first-team regular Charlie Taylor on ahead of him in their comfortable 4-2 FA Cup victory over Peterborough as “straightforward”. It’s a comment that stinks of a manager who is never going to take a risk and play the kids. Three squad call-ups don’t mean sh*t if you don’t get on the pitch. Time to go Ali.

CHELSEA: Billy Gilmour
Fifth-choice centre-half Marc Guehi’s already agreed a spell at Swansea and despite Frank Lampard’s insistence that he wants midfielder Billy Gilmour to stay and fight for his place, the Scot may be better off getting similar Championship experience. Lampard was right to say that the 18-year-old “ran the game” in the Blues’ 7-1 EFL Cup victory over Grimsby in September, but no further first-team action and the obvious influence of last season’s loanees suggest game time elsewhere would be a far better option for Chelsea, the player and the lucky club that can snag him for the rest of the season.

With help from Frank Lampard last year, three of our academy players attempted to recreate Zola’s incredible goal too!

CRYSTAL PALACE: Sam Woods
“Sam is a determined young man who is developing well by spending his time with the first team and he has equipped himself well when required. He must keep working hard, but I feel he has a bright future ahead of him,” said Roy Hodgson in August after Woods – a centre-half by trade – started at right-back in the Carabao Cup. Without a Premier League appearance, no chance of more than his 14 minutes of FA Cup action and five senior centre-halves ahead of him, at 21, it’s surely time for the first loan spell of his career.

EVERTON: Beni Baningime
Superfluous to indispensable – Tom Davies is once again Everton’s great hope and is going nowhere. But fellow Everton youth product Baningime is nowhere to be seen. He was brought into the first team by David Unsworth in 2017 and kept in by Sam Allardyce, and was perhaps tainted by the anything but policy after Allardyce left. The promising 18-year-old is now a stagnating 21-year-old and needs pastures new.

Owls’ anguish over George Hirst could spread far and wide https://t.co/oD6hHkKtIT By @DTguardian

…but the truth is that he is now a Leicester City player who cannot get near the Leicester City first team, the 20-year-old being restricted to Under-23 duty, and really needs a move to experience first-team football. Though the very slight possibility of a Foxes debut against the Owls in the FA Cup is mighty intriguing.

LIVERPOOL: Caoimhin Kelleher
Rhian Brewster has joined Swansea after finally realising he was never going to get enough game time this season. But after Curtis Jones and the youngsters embarrassed Everton in the FA Cup, it’s unlikely many of them would want to leave, with the prospect of more notoriety in cup games when Klopp is likely to lean on youth once again. But while third-choice keeper Kelleher was important when Alisson was injured, Adrian is now likely to start all cup games so the young Irishman may as well get some action elsewhere. Preston have been mentioned.

MANCHESTER CITY: Taylor Harwood-Bellis
No, not Phil Foden, who is still just about doing fine. Or Eric Garcia who is now also doing fine – starting and impressing in City’s wins over Sheffield United and Everton. But Pep may as well let Garcia’s fellow centre-half and “exceptional human being” Taylor Harwood-Bellis move down a division or two for the rest of the season.

Taylor Harwood-Bellis and Tom Doyle getting on it at every away match.

Phill Foden born a blue on the bench and often starting for the senior team.

Our youth is City through and through. https://t.co/KAyJG0f5aL

MANCHESTER UNITED: Andreas Pereira
Okay, so he’s not a youngster. But the 24-year-old sure as sh*t isn’t good enough to be a Manchester United midfielder. And he’s been linked with a loan move to Sporting Lisbon as a makeweight in the €70m deal to bring Bruno Fernandes to Old Trafford. United should be paying them to take him. If they’re really lucky, he’ll stay there.

NEWCASTLE UNITED: Luke Charman
“It gives you real hope,” said the 21-year-old striker after watching the Longstaff brothers break through at Newcastle. “As soon as Steve Bruce was appointed I knew that this was the best time – if ever there was one – to get a chance as a local lad. He’s come in and he’s came in on a clean slate. He will judge us from now.” But despite Newcastle’s well-documented goal-shy striking options, Charman is yet to make a first-team squad. It might be time to get a proper taste of League One football; given the chance, he could be the next Ivan Toney.

NORWICH CITY: Archie Mair
Who said FA Cup hat-trick hero Adam Idah should go on loan? Idiots. A more likely mover would now be Archie Mair. The former Aberdeen goalkeeper has made the Norwich bench but has not seen first-team action, with Tim Krul and Michael McGovern ahead of him at Carrow Road. As is Ralf Fahrmann, who was signed just four days after Mair in the summer – a slap in the face for the poor wee bairn.

SHEFFIELD UNITED: Reece York
Central midfielder York looks even more unlikely to play anything other than development football following the signing of Jack Rodwell. Now 19, York left Fulham for the Blades last summer but might have to move on again to get his first taste of first-team football.

SOUTHAMPTON: Callum Slattery
Nearly a year ago he started and played the full 90 minutes of a Premier League game but now he is very much ensconced in Southampton’s Under-23 set-up, captaining that side. The 20-year-old has as much chance of game time as a commentator not mentioning James Ward-Prowse’s expert set-piece delivery. There’s probably a decent career waiting for central midfielder Slattery in the Championship.

TOTTENHAM HOTSPUR: Oliver Skipp
The 19-year-old has played five times as many minutes for Jose Mourinho this season as he did for Mauricio Pochettino. That’s ten minutes with Spurs 5-0 up to Burnley versus a solitary minute under Poch in each of the opening two games of the season. Mourinho begrudgingly plays Winks, so Winks junior stands no chance. A move to a solid Championship side would be great.

Oliver Skipp still likely to head on loan after featuring for only 12 mins in PL this season interest from Turkey, Holland and Germany, due to the short nature of any loan and thus a need for cultural adaptation, it is thought he would opt for a domestic club. [@David_Ornstein] pic.twitter.com/XEfQdhfkJn

WATFORD: Sam Dalby
The January acquisition of exciting Brazilian striker Joao Pedro ends any chance of first-team football for Sam Dalby. The 20-year-old former Leeds striker hasn’t played under any of the three Watford managers this season, and it’s unlikely they’re all wrong. Probably needs to drop down a division, or two, or three. But £4million to sign Pedro from Fluminese is a bargain – the Hornets have got a real player there.

WEST HAM: Bernardo Rosa
The West Ham under-23s are quite a team – unbeaten in 15 games, winning 12 and scoring 48 goals. And 19-year-old Brazilian Rosa has been a big part of that success – the creative influence in the centre of the pitch. But given the number of supposedly inventive central midfielders available to incumbent first-team boss David Moyes – who is not famed for his risk-taking – Rosa’s development could well be aided by a brief Hammers hiatus.

WOLVES: Dion Sanderson
“He’s a great kid who works hard, all the challenges we’ve put to him, even as a young boy, he’s always risen to,” said Wolves Academy boss Scott Sellars this summer as Sanderson – nephew of javelin legend Tessa Sanderson – signed a new contract. But he is 19 and with Wolves now out of the FA Cup is unlikely to earn more than the 90 minutes he played in defeat to Aston Villa in the Carabao Cup. Six months in League One might just be the ticket.