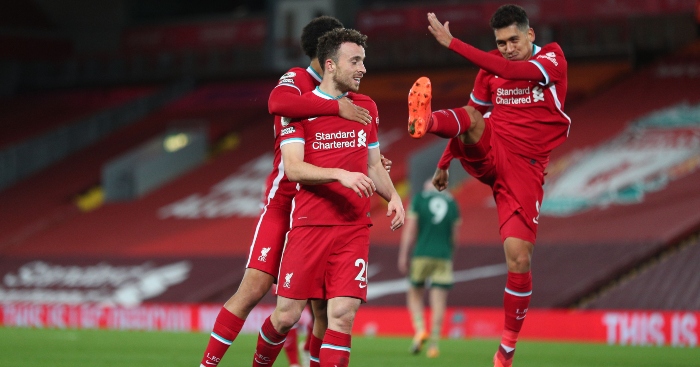 Liverpool shrugged off another VAR controversy to claim a 2-1 comeback victory over Sheffield United at Anfield.

Just seven days after the Reds wrote to the Premier League for an explanation of two contentious referrals by David Coote in the Merseyside derby, the video assistant – this time Andre Marriner – found himself in the spotlight again.

He upgraded Fabinho’s tackle on Oli McBurnie from a free-kick to a penalty despite the Brazil international appearing to win the ball right on the edge of the area – something it is understood the VAR official elected not to check – and Sander Berge did the rest to put the Blades ahead.

The defending champions escaped a couple more penalty appeals before Roberto Firmino, just before half-time, and Diogo Jota struck to extend Liverpool’s unbeaten home league run to 62 matches, one short of equalling the club record between 1978 and 1981, as they moved second on goal difference.

It was one of their most hard-fought of 51 victories in that sequence with United not only working hard to hold their early advantage but creating enough opportunities to concern Jurgen Klopp’s side, who had the added security of Alisson Becker back in goal ahead of schedule following a shoulder injury.

After complaining about Jordan Pickford’s reckless tackle on Virgil Van Dijk which has left the centre-back sidelined for several months and the debatable, marginal offside which ruled out Jordan Henderson’s added-time winner at Everton, the last thing Liverpool needed was more VAR controversy.

But that is exactly what they got in the 13th minute when Fabinho tackled McBurnie right on the edge of the area.

There was some argument whether it was even a foul as the Brazilian appeared to get a touch on the ball but referee Mike Dean immediately awarded a free-kick.

VAR checked the decision and ruled Dean should upgrade it to a penalty, the first away team to be awarded one in the Premier League at Anfield since Manchester City in October 2018.

One of Liverpool’s issues at Goodison Park had been the confusing and contradictory explanations given to explain why no action had been taken against Pickford.

So it would not have impressed them to learn the Premier League subsequently confirmed VAR checked only for whether Fabinho’s transgression was a free-kick or a penalty, not whether it was actually a foul.

You could almost picture somewhere inside Anfield’s cavernous Main Stand an official was already composing another strongly-worded email even before Berge sent Alisson the wrong way.

United capitalised on Liverpool being knocked out of their stride as McBurnie, who wanted another penalty for a foul by Trent Alexander-Arnold, fired across goal and Ben Osborn’s volley was parried by Alisson, while yet another shout went up after the ball hit Andy Robertson’s arm from close range.

Aside from John Egan clearing Sadio Mane’s shot away from an empty goal and Alexander-Arnold testing goalkeeper Aaron Ramsdale with a free-kick from the halfway line before they went behind, Liverpool had created little despite their 4-2-3-1 formation allowing them to field Jota alongside their famed front three.

The visitors’ hard-running covered so much ground to shut off the channels that Klopp’s players began to make unforced errors in possession, and it was not until Mane’s header was palmed by Ramsdale that Firmino equalised four minutes before half-time.

Midway through the second half VAR ruled out, correctly, a brilliant individual effort from Mohamed Salah, who juggled Alexander-Arnold’s overhead pass before slotting past Ramsdale.

However, it no reprieve for the visitors as Jota rose to head home Mane’s cross moments later for his second goal in four league matches for his new club.

Salah hit a post when it seemed easier to score after lifting a shot past Ramsdale to offer the second-bottom visitors hope of snatching an equaliser but, despite their pressure, they slipped to a fifth defeat of the season.