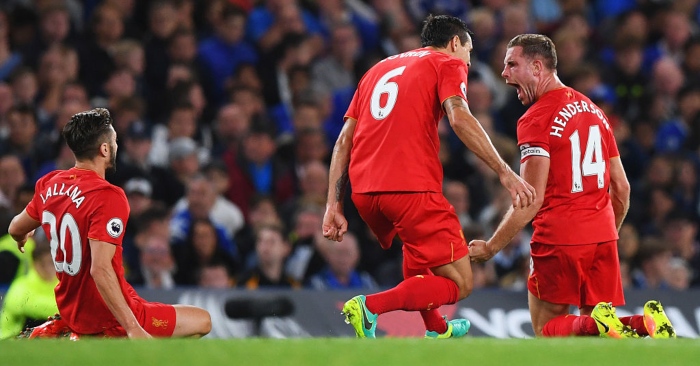 1) Emiliano Martinez (August 2010)
And some people don’t think Arsenal have any dressing-room leaders.

1) Jack Grealish (July 2012)
He’s really, really good. And Gareth Southgate might have to make an exception for him.

2) Jed Steer (July 2013)
It took almost six years for Steer to become Villa’s first-choice goalkeeper. And then they signed Tom Heaton. And when Heaton got injured, so did poor Steer.

3) Andre Green (July 2016)
Now on loan at Charlton after Villa bought a whole team’s worth of players.

1) Harry Arter (June 2010)
Still a Bournemouth player although his loan at Fulham means he may never play for the Cherries again.

2) Charlie Daniels (November 2011)
The old man has missed pretty much the entirety of the season after knee surgery.

1) Lewis Dunk (April 2010)
Now being linked with Manchester City after serving his time on the south coast.

3) Dale Stephens (January 2014)
Six years at Brighton and we still couldn’t pick him out of a line-up.

1) Kevin Long (January 2010)
Shane must be awfully proud of his brother. He usually keeps Ben Gibson off the bench.

1) Lucas Piazon (January 2012)
Lucas Piazon has played once in the Premier League for Chelsea, as a second-half substitute in December 2012. He is now on loan spell No. 7 (at Rio Ave).

2)  Cesar Azpilicueta (August 2012)
He has played an awful lot of games for Chelsea and won six major trophies.

Wait! Is this same Victor Moses that was at Chelsea that am watching at Inter Milan right now playing football like this? Wow. So what changed?🤔🤔🤔

1) Leighton Baines (July 2007)
He has only played 243 minutes of football this season, but that’s probably just about enough at 35.

3) Seamus Coleman (January 2009)
David Moyes has never spent £60,000 more wisely, except when he booked a helicopter that one time.

2) Wes Morgan (January 2012)
Against all odds, Nigel Pearson’s second Leicester signing – Danny Drinkwater was his first – is still knocking about in the East Midlands.

2) Adam Lallana (July 2014)
This seems ridiculous; he has pretty much only just joined.

Jones will save £££ for Lallana’s replacement

Just as cheap solutions like Gomez,Trent & Robertson saved £££ to go big on likes Alisson & VVD.This next gen will do similar

3) Fernandinho (July 2013)
He has come a long way since having to choose a different squad number because James Milner was already wearing the No. 7 shirt when he signed. Replacing this trio might be the biggest challenge of Pep Guardiola’s career.

1) Paul Dummett (July 2010)
“I don’t think you’ve what it takes to play in my team,” Paul Dummett recalls hearing from Alan Pardew upon his return from a loan at St Mirren in summer 2013. He is still there; Pardew is not.

3) Rolando Aarons (April 2014)
He just edges out Jack Colback, who joined two months later. Nobody comes out of this looking good. Motherwell, by the way.

2) Louis Thompson (September 2014)
A career blighted by injury is currently being rebuilt at MK Dons on loan.

3) Ben Godfrey (January 2016)
Signed for pennies from York City, Godfrey is now an England Under-21 international.

1) Chris Basham (June 2014)
Only three members of Sheffield United’s first-team squad pre-date Chris Wilder’s appointment; Basham is the only one of the trio to be a Premier League regular.

2) Kieron Freeman (January 2015)
Not a single Premier League appearance as a reward for that longevity.

3) Billy Sharp (July 2015)
Nobody will ever take that opening-day goal away from him.

1) Jack Stephens (April 2011)
A £150,000 signing from Plymouth, centre-back Jack Stephens has been worth every penny. And that is not a compliment.

3) Maya Yoshida (August 2012)
The last of the summer signings from their 2012 promotion summer is now on loan at Sampdoria.

1) Danny Rose (July 2007)
Now at Newcastle on loan in a transfer that suits all parties.

In 2018, Jan Vertonghen was our player of the year, and less than a year ago he had that incredible performance against Dortmund at Wembley, now he looks a shadow of that player.

It's real sad to see, but by that reaction of him walking off he looked absolutely gutted… pic.twitter.com/RhcxlTxRd1

1) Mark Noble (August 2004)
Mark Noble is the Premier League’s current longest-serving player. He is the hero none of us deserve.