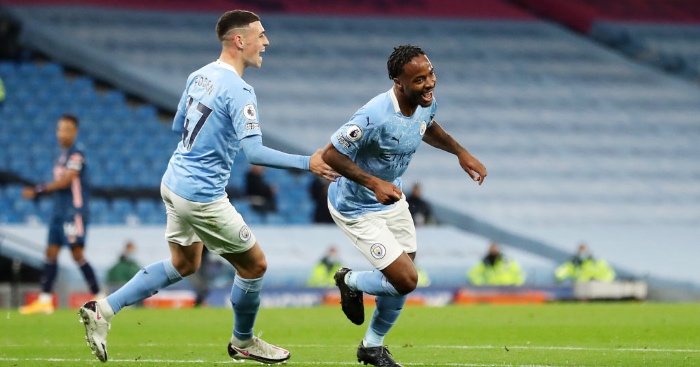 Raheem Sterling’s first-half goal was enough for Pep Guardiola to get one over his old assistant as Manchester City edged out Mikel Arteta’s Arsenal 1-0.

Sterling struck in the 23rd minute when Bernd Leno could only parry Phil Foden’s shot and Ederson ensured that was enough as he made fine saves from Bukayo Saka and Pierre-Emerick Aubameyang before the break.

Without Kevin De Bruyne, City were far from their swashbuckling best but, as Sergio Aguero returned to clock up 65 minutes in his first appearances since June, they ground out the result to capitalise on Liverpool’s controversial draw in the Merseyside derby and edge their way into the top half.

Arteta masterminded victory when these two sides met in the FA Cup semi-final in the summer but Arsenal have not won at the Etihad since January 2015, with City having won eight and drawn two of the last 10 meetings between the two sides.

Though Aguero’s return was a boost, Guardiola was forced into a defensive reshuffle with both Aymeric Laporte and Benjamin Mendy missing through injury, adding to the worries ahead of Wednesday’s meeting with Porto.

City initially lined up with Joao Cancelo at right-back, Kyle Walker partnering Ruben Dias in the centre and Nathan Ake on the left, thought it was best described as fluid as Guardiola tried to keep his old right-hand man guessing.

The early signs were promising as Riyad Mahrez bent a shot narrowly wide with less than a minute gone before teeing up Aguero who headed over from close range.

Arsenal were slow to grow into the game but just as they were beginning to get a foothold in the City half, the hosts took the lead with 23 minutes gone.

Aguero drove forward to feed Foden on the left. The England midfielder cut in to see his shot parried by Leno but it fell kindly for Sterling to side-foot home.

The game was open now as Mahrez forced a save from Leno before the Arsenal goalkeeper prevented Foden from capitalising on a loose pass by Gabriel, but the Gunners took encouragement as they finished the half stronger.

Ederson made a brilliant save to deny Saka as he linked up with Granit Xhaka to break through the City defence, only for the goalkeeper to turn his shot over.

And Ederson made himself big again moments later to deny Aubameyang from point-blank range – with replays showing the Gabon forward was onside even as the flag went up.

Arsenal then wanted a penalty before the break for a high foot from Walker just before Gabriel fired wide, but referee Chris Kavanagh was uninterested.

Arsenal were straight on the front foot after the break as Pepe headed Aubameyang’s cross at Ederson, hurting himself as he landed awkwardly.

After that early flourish the two sides began to cancel each other out in a more cagey second half.

Aguero was replaced by Ilkay Gundogan with 65 minutes gone as Sterling moved forward for City.

But it was Arsenal who threatened next with Saka felled by Dias before David Luiz sent the resulting free-kick over the crossbar.

Luiz then narrowly avoided an own goal at the other end as Cancelo forced space to send in a low cross and the Brazilian’s attempted block span across the face of goal.

Pepe then bent another free-kick narrowly wide after Walker felled Aubameyang, while Sterling passed up a late chance to settle it after breaking into the box.