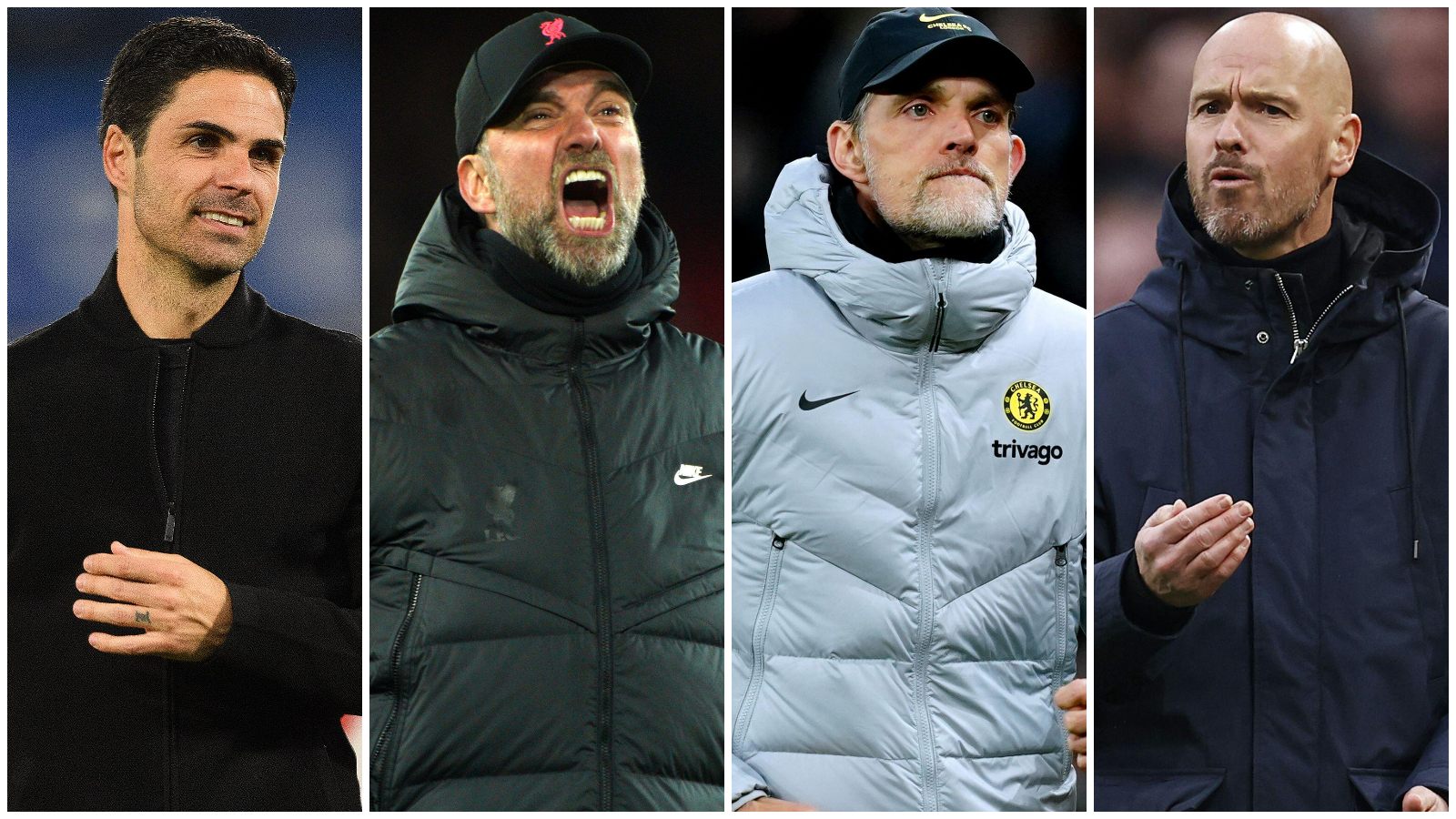 Jurgen Klopp has the longest deal in the Premier League – unless Manchester United take up their option to extend Erik ten Hag’s initial three-year contract.

Arsenal: Mikel Arteta – 2025
Arsenal revealed on Friday morning that Arteta has extended his deal to the end of 2024/25, keeping him under contract for three more years. Announcing Arteta’s new terms alongside those given to women’s boss Jonas Eidevall was a nice touch.

Aston Villa: Steven Gerrard – 2025
It was thought that Gerrard would sign for two and a half years when he was moving from Rangers but the former Liverpool midfielder is tied to Villa until the end of the 2024/25 season.

Brighton: Graham Potter – 2025
Potter initially signed for four years to 2023 when he was appointed by Brighton in 2019, but the Seagulls extended his deal after just six months, with the former Swansea manager now tied down until the summer of 2025.

Brentford: Thomas Frank – 2025
After a fine start to their first season in the Premier League, the Bees gave Frank and assistant Brian Riemer contract extensions until 2025. Their previous deals were due to expire at the end of next season.

Burnley: Mike Jackson – end of the season
The caretaker boss is still working on a game-by-game basis, though the Clarets’ revival under the Under-23s coach has made their search for a new manager rather less urgent. Sean Dyche had signed a contract extension last September, meaning his deal still had three years left to run when he was sacked last month.

Chelsea: Thomas Tuchel – 2024
“I think I am under contract until 2024,” said Tuchel in January as he approached the one-year anniversary of his appointment. When he took over from Lampard, the German signed an initial 18-month deal ‘with the possibility of an extension’, which duly came after Chelsea won the Champions League.

Crystal Palace: Patrick Vieira – 2024
The Eagles swooped to land Vieira on a three-year deal to 2024 when he was appointed last summer to replace Roy Hodgson.

Everton: Frank Lampard – 2024
Lampard signed for two and a half years to 2024 when he was appointed in January, but some reports suggest Everton inserted a clause allowing them to part company with the ex-Chelsea boss at the end of this season if they so wish.

Leeds United: Jesse Marsch – 2025
The American coach penned a deal until summer 2025 when he was appointed in March, giving Leeds more security than they enjoyed with Marcelo Bielsa, who only ever worked on 12-month contracts.

Leicester: Brendan Rodgers – 2025
Rodgers initially signed a deal until 2022 when he arrived from Celtic in February 2019, but amid reported interest later that year from Arsenal when they were looking to replace Unai Emery, the Foxes extended that contract until 2025. Though reports suggest Rodgers retains a clause allowing him to leave for a Champions League club

Liverpool: Jurgen Klopp – 2026
It was widely thought Klopp would walk away from Liverpool in 2024 when his contract was due to expire before he signed an extension last week to summer 2026. “When the owners brought the possibility to renew to me, I asked myself the question I’ve mused over publicly. Do I have the energy and vibe to give of myself again what this amazing place requires from the person in the manager’s office? I didn’t need too long to answer in truth. The answer was very simple… I’m in love with here and I feel fine!”

We are delighted to announce Jürgen Klopp has signed a new contract to extend his commitment with the club! 🔴

Manchester City: Pep Guardiola – 2023
It is expected that Pep will follow Klopp’s lead by signing a contract extension very soon with his current terms, that were agreed in November 2020, set to expire at the end of next season.

Manchester United: Erik ten Hag – 2025
Once Ralf Rangnick’s interim tenure reaches its conclusion at the end of the season, Ten Hag will arrive from Ajax, with a three-year contract already filed away. United also have the option to extend that initial deal for a further year to 2026 should the Dutchman manage to re-float the sinking ship.

Newcastle: Eddie Howe – 2024
Wor Eddie was given a two-and-a-half-year contract when Newcastle finally appointed their new manager last November. Those terms might be looked at again if he continues the progress the Magpies have made on his watch.

Norwich: Dean Smith  – 2024
Smith was appointed around the same time as Howe and the Canaries boss signed a similar two-and-a-half-year contract to take him to the end of the 2023/24 season.

Southampton: Ralph Hasenhuttl – 2024
After initially signing for two and a half years when he was appointed in December 2018, Hasenhuttl signed a contract extension in June 2020 to take him through to the end of the 2023/24 season. The Saints boss has suggested he might retire if he remains in post until the end of his current deal. “I want to put Southampton on a very solid footing by 2024, but then that’s it. I’ll be 57 years old. I’d like to experience other things and not sit on the bench like Roy Hodgson at 74. Definitely not.”

Tottenham: Antonio Conte – 2023
The Italian signed a one-and-a-half-year deal when he was appointed by Spurs last November. He has suggested he would be open to extending that contract if the club show ‘good vision and ambition’.

✍️ We are delighted to announce the appointment of Antonio Conte as our Head Coach on a contract until the summer of 2023, with an option to extend.

Watford:  Roy Hodgson – end of the season
Hodgson and the Hornets agreed to a short-term deal until the end of the season when he was tempted back into work in January. Once that deal runs its course, the 74-year-old will have another crack at retirement. “I think I’ve earned the right to step back and enjoy some free time and spend some time with my wife and son,” he said this week.

West Ham: David Moyes – 2024
The Hammers finally gave Moyes some long-term security last summer when he penned terms for three years. he initially returned to the club on an 18-month deal in December 2019.

Wolves: Bruno Lage – 2024
The Portuguese coach replaced Nuno last summer when he signed a three-year deal at Molineux. Nuno was only a year into a three-year contract when he walked away last summer.