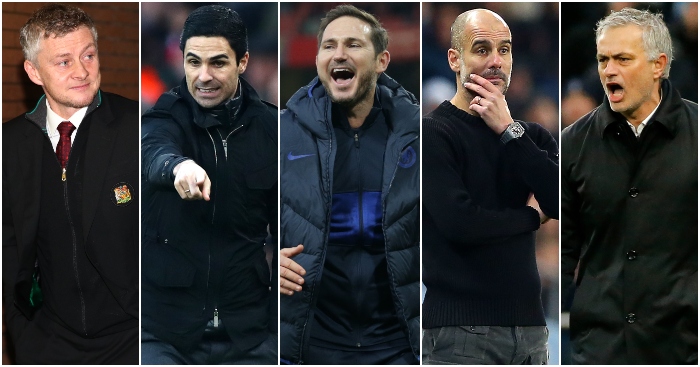 Not that we’re wishing for anyone to lose their job, but does it strike anyone else as a bit odd that we’re this far into the season and not one Premier League manager’s job feels under significant pressure?

Think about it. Who’s about to lose their job? That’s right. Nobody.

There are plenty of reasons for this, but it’s still a quirky one. First and most obviously, this is a very weird season. There are no crowds to provide the sort of instant feedback that might unnerve a chairman.

The otherworldly weirdness of this season and its inherently weird results perhaps also play their part. Easier to ride out a few bad results in a league where Manchester United can lose 6-1 at home or Liverpool can get blatted 7-2.

More fundamentally, the unpredictability of the overall results means nobody is really too far away from where they would want to be. Even the Manchester clubs – the conspicuous ‘strugglers’ among the bigger clubs – will be within one game of the summit if they win their games in hand.

At Chelsea you’ve got Frank Lampard, who claims he’s treated differently than other top-six managers because he’s English and is completely correct about that, just not in the way he means it.

The first one to ‘go’ might be Pep Guardiola announcing in December that he will stand down at the end of the season. All the other leading clubs look sure to stick with their current man.

Look down the table and who’s out of place? There are a few teams higher than you might expect, but none of them look like they’re about to have their manager pinched and nobody is disappearing over the horizon. Then it’s only Burnley and Sheffield United who are any distance below where they might have expected to be, and even then it’s not a huge surprise to see them struggle. And in both cases you have overachieving managers who have more than earned a bit of extra leeway when it comes to turning things round. At neither club would you have any real confidence that a managerial change could produce more than a dead-cat bounce.

Brighton are too invested in the Graham Potter project to abandon unless it goes really tits up. Then there’s Fulham and West Brom, for whom all the fuss and bother of changing managers would all seem a bit pointless anyway because nobody’s saving them, so why go to the trouble of an expensive managerial change?

The existence of West Brom and Fulham also means there is very probably only one relegation place left to worry about, which also serves to instantly alleviate the pressure on everybody else.

And then there’s the fact West Ham haven’t been completely dreadful. That’s probably the biggest one, actually.

Someone at some point will almost certainly panic that 18th place has their name on it and dig out Sam Allardyce’s number, or fear they’re going to miss out on the top four and give Mauricio Pochettino a call, but for now a season that seems gloriously full of possibilities for more clubs than ever has managed to take the pressure off everyone.