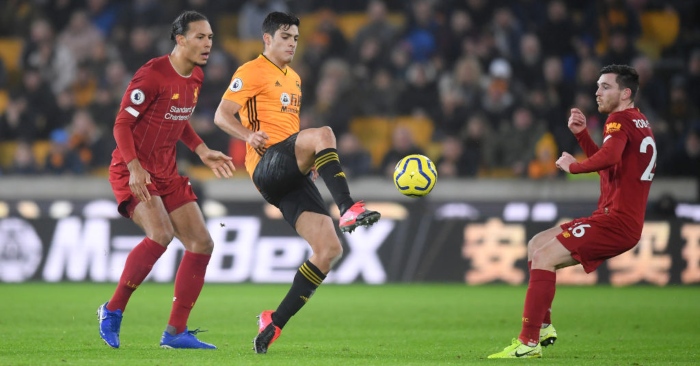 And we’re talking international minutes too – so all of the minutes since July 1, 2019 for club and country, barring glorified friendlies like the Super Cup/Community Shield. Oh and we care not a jot for goalkeepers as they barely move…

10) Andrew Robertson (3064 minutes)
Even a complete absence of involvement in domestic cup competitions – and withdrawal from international duty with Scotland in November – has not really curtailed Robertson’s football this season as he has started 24 of 25 Premier League games (he was given a precious hour off at home to Watford in December), as well as five of six Champions League games and the entirety of the Club World Cup. And all that running really is starting to take its toll.

Robertson not his usual standard, given the ball away quite a few times and looks tired. Needs a break #lfc Do Liverpool have another LB? Is that Spanish LB still there? #LIVMUN

9) Roberto Firmino (3112 minutes)
The Brazilian has played fewer club minutes than Robertson and is often given a breather at the end of games already won – though he missed just a handful of minutes through the exhausting Christmas period – but he has played an inordinate amount of football for his country, winning Copa America last summer and then starting five of six friendlies since. He barely gets a break for club or country because there really is nobody like Firmino. “How he uses the skills of his mates is special. I do not know a player like him, that is true,” said Jurgen Klopp this week.

8) Leander Dendoncker (3128 minutes)
The first of four Wolves players whose season began in Europa League qualifying in July. The Belgian’s versatility means that he has played an awful lot of minutes both in central midfield and centre-half without ever really being first choice in either position (‘doing a Dier’). With pretty much a full compliment of players this weekend for the trip to Old Trafford, it was Denconcker who dropped to the bench to allow Willy Boly to take his rightful place in the centre of defence.

7) Raheem Sterling (3215 minutes)
The absence of Leroy Sane has led to Sterling being seriously over-worked. And it now shows as Sterling has contributed neither goal nor assist in 2020. Poor Sterling has barely even been rested in the domestic cups, playing 76 minutes against Oxford United and the full 180 minutes of the League Cup win over Manchester United. His form has been really quite poor in recent weeks, culminating in what should have been a red card at Tottenham on Sunday.

We seem like a tired team making tired decisions. No one more so than Sterling.

6) Toby Alderweireld (3240 minutes)
First-choice centre-halves rarely get a break and Alderweireld is first choice for both club and country. He has only missed one Premier League game this season and that proved to be Mauricio Pochettino’s final game, while he was only excused Champions League duty against Red Star, who presented a challenge that even Eric Dier could repel. Alderweireld is back in the kind of imperious form that made him one of the best Premier League players of the 2010s.

My player of the season so far is Van Dijk. Only reason people aren’t saying it is because he won it last year. But that doesn’t stop Messi or Ronaldo winning the Balon D’or every year. The best is the best, shouldn’t be about sharing it out

4) Raul Jimenez (3394 minutes)
Patrick Cutrone was supposed to share the load but his failure to settle has left Raul Jimenez on Premier League and Europa League duty. To his credit he has coped admirably with being over-worked, contributing 20 goals in all competitions. How Manchester United fans would love to see him up front for their club instead of Anthony Martial or Odion ‘not the worst idea but still…’ Ighalo.

3) Joao Moutinho (3417 minutes)
At the age of 33, he would probably quite like a rest – especially after being flogged on Europa League qualifying duty in July – but Moutinho is simply too good to rest. Probably the best player to pull on a Wolves shirt this century, he has quite possibly been the Premier League bargain of this generation too. And he is playing more football than just about everybody else. His secret? “I train well. I eat well. I drink water and hydration drinks. I rest when I need to rest. I come to training every day as if it is the first day. They are small things but they make a difference.”

1) Harry Maguire (3552 minutes)
If you pay £85m for something, you use it. For every minute in the Premier League. And then against Colchester in the Carabao Cup. And then against Tranmere in the FA Cup. And if you’re Gareth Southgate and you are staring at a pretty empty in-form centre-half cupboard, you don’t give the man a minute’s rest. To be fair, he was excellent against Wolves…