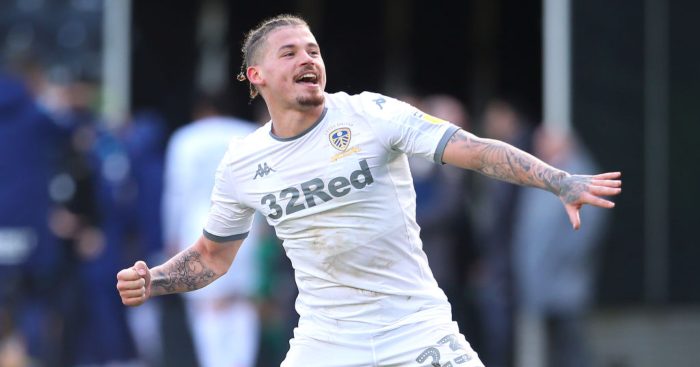 The criteria is that they must not have played even a minute in the Premier League before…which ruled out most of Fulham’s squad.

Kalvin Phillips (Leeds United)
Talk to almost any Leeds fan and they will tell you unequivocally that Kalvin Phillips is a better defensive midfielder than Declan Rice and Eric Dier. Until the autumn of 2020 that could be dismissed as the talk of lunatics who have failed to grasp the basic notion that one league is rather better than another, but the time is now approaching when we will discover whether that talk was fanciful nonsense or the absolute truth, given credence just in time for England to sweep to glory at Euro 2021.

Kalvin Phillips is so superior to Declan Rice. Should 100% be in this squad #lufc #ENGKOS

What we know about Phillips is that he has thrived under Marcelo Bielsa and has undoubtedly been the Championship’s most complete midfielder over the last two seasons, with in-game intelligence to match his physical and technical attributes. Can he also stand out above the crowd in the Premier League? Yorkshire has been crying out for a new hero.

Jack Harrison (Leeds United)
Not American, apparently, which was the first thing we discovered via a quick Google to make sure he had not played the odd minute in the Premier League. Despite not being 100% certain of his nationality, we have been impressed with his consistency on the left this season. Everything has improved in his second season at Leeds – but particularly his fitness, his finishing and his crossing. It may not have rocketed him into the sphere of Pablo Hernandez, but it has earned him a third loan spell and the promise of a permanent deal.

Not bad for a player many Leeds fans would have happily sent back (as much as you can go back to a place you have never been. Take note, Foreign Office) to Manchester City last summer. Is he ready for the Premier League? “I don’t have a doubt about that,” says Patrick Vieira.

Matheus Pereira (West Brom)
“I saw a player that not only had Brazilian and Portuguese skill but also character, physicality, determination and personality. That is why we wanted him so much,” says Slaven Bilic when discussing a footballer who already looks like a £8.25m bargain even before he has kicked a ball in the Premier League. He scored eight goals and made 16 more in the Championship last season, meaning that the one thing West Brom do not need this ‘summer’ is a new No. 10.

Quite frankly, he is f***ing brilliant.

Matheus Pereira In The Championship 19/20

Semi Ajayi (West Brom)
He has played in every other league down to Conference North so it’s time that the giant Nigerian defender had a pop at the Premier League. He is living the dream right now…promoted to the top flight, a Baggies’ fan favourite and now firmly established in Nigeria’s first-choice XI.

But don’t be fooled into thinking that the big man is slow; Ajayi is famously so rapid that when he was at Arsenal as a youngster he was advised by Per Mertesacker to improve his positional sense and not rely too heavily on his recovery pace. Obviously, this was a problem the big f***ing German had encountered and solved himself.