Home F365 Says PL not too small for Big Six; it’s too big for Sh*t Six 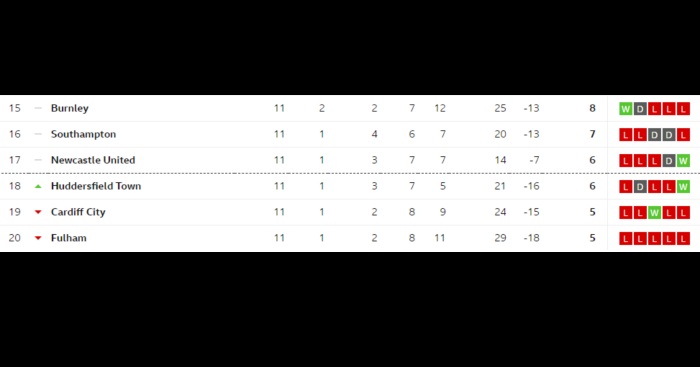 ‘The game of the season so far taught us many things,’ began the report in the Daily Mirror about Saturday night’s clash between Arsenal and Liverpool. But arguably it had not even been the game of the day; that took place at the Vitality Stadium between a team playing the most accomplished football of their entire existence and another playing some of the worst and then some of the most thrilling football of their recent, scarred history. And it taught us many things, chief among them being that this Premier League campaign is not quite so desperately miserable and lopsided as some would have you believe.

There are those keeping running totals of the points dropped by the Big Six against ‘the rest’ (17), calculating the possible points total of the team in fourth and declaring just how often that would have been enough to win the title, or telling us how many teams have ever remained unbeaten for this long. The narrative is set: Competition is dead; there is a clear divide between the very biggest teams with the very biggest pots of money and ‘the rest’. Some would have you believe that the inevitable end to this sorry tale is a European Super League. The elite might be forced to pull up the drawbridge and then build a wall just to stop would-be invaders drowning in the moat.

And yet at the tiny Vitality Stadium on Saturday was a game as close as any this campaign between one of the haves and one of the supposed have-nots. Both teams had 18 shots, possession was shared almost exactly 50-50, the tackle count was 18-17, the difference in xG was negligible and the naked eye saw a barnstorming clash between two incredibly evenly matched sides. That Manchester United eventually triumphed will not have felt immaterial to Bournemouth, but it should be almost immaterial to the neutral. It was a rip-roaring game between equals, regardless of wage bills or trophy cabinets.

So proud of the @afcbournemouth lads today they were superb against @ManUtd 100% deserved something from the game. It shows how far this football club has come when your absolutely devastated loosing to @ManUtd thanks to all our supporters you we’re amazing. #Onwards&Upwards

The game’s most impressive centre-half was in the red and black of Bournemouth; the game’s most potent striker was wearing the same kit; it mattered not a jot whether Bournemouth built their team for less or more than the price of a Paul Pogba; competition in the Premier League is absolutely not dead.

The Cherries lost that game 2-1 but they remain above United in the table, while Watford and Everton are a further one and two points further back. Bournemouth have now scored more goals than Tottenham, and Watford have conceded fewer than Arsenal. Does that sound like a closed shop? Does that sound like we are ready to watch six teams gallop into the distance?

Yes, we have just witnessed another weekend of Big Six teams only dropping points to other Big Six teams, but only Manchester City eased away from their opposition. Tottenham made ridiculously hard work of beating Wolves, Chelsea were seriously troubled by Crystal Palace and Manchester United were pretty much matched by Bournemouth. All showed flaws. The City result was the anomaly, born not only of their excellence but the abjectness of Southampton.

For that is where the real worry lies this season – not in the very best getting inexorably better, but the very worst getting inexorably worse. Philip Cornwall – formerly of this parish – used to argue that any Premier League team claiming less than a point a game should be immediately relegated. In recent years, that would have put between three and five teams in trouble after 11 games; this season, that number stands at seven. Of those, perhaps only Palace are in a false position and could reasonably be expected to join the clubs above them in mid-table mediocrity. The rest are uniformly awful. None of them have taken a single point off the Big Six.

This Premier League has not become too small for a minority of mega-rich clubs; it has become too big for a similar-sized minority of minnows. In the whole of 2018, Southampton have picked up barely half the points of Bournemouth, while Huddersfield have scored exactly half the goals of Watford. The cream is absolutely rising to the top, but the silt is settling on the bottom and cannot be reached by even the longest of spoons.

If further illustration were needed, look at the odds. The bookies see Everton and Wolves as considerably better bets to win at Chelsea or Arsenal this weekend than Burnley to triumph at Leicester. Neither Huddersfield nor Newcastle are billed as favourites to win at home against West Ham or Bournemouth. This is not a league of the haves and have-nots; this is a league of the haves, the might-haves and the never-had-a-bloody-chances.