Liverpool and Leeds equalled the record for highest-scoring Premier League game on an opening day. 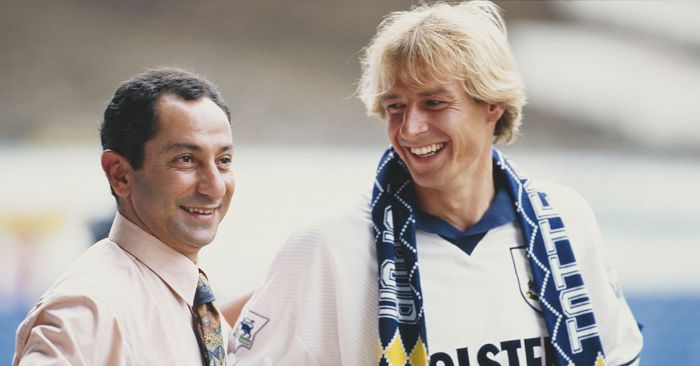 The weekend’s enthralling 4-3 between Liverpool and Leeds equalled the long-standing record for most goals in an opening day Premier League match. Here’s a look back at the other four games that have started the season with a seven-goal scoreline.

Sheffield Wednesday 3-4 Tottenham – 1994
The match that introduced ‘The Klinsmann’ celebration to the world of sports will live long in the memory of any 90’s kid.

Finishing a lowly 15th the previous season, the weight of expectation on Spurs was heavy. Managed by club legend Ossie Ardiles, they had invested heavily in the transfer market in the summer to bring in Jürgen Klinsmann from Monaco for £2million, and Romanian internationals Ilie Dumitrescu and Gheorghe Popescu from Steaua Bucharest and PSV respectively. These new signings joined a talented Spurs squad, packed with notable players like Teddy Sheringham, Darren Anderton and 19 year-old Sol Campbell.

Wednesday were equally optimistic for the season ahead, and were expected to challenge for European qualification. Led by player-manager Trevor Francis, they were an experienced squad featuring seasoned internationals like Des Walker and Dan Petrescu.

Indeed the 1994/1995 season saw a wealth of Romanian talent snapped up across Europe, due in large part to the national team’s performance in the World Cup earlier that summer. Inspired by their talismanic captain Gheorghe Hagi, the underdogs had made it to the quarter-finals, knocking out tournament hopefuls Argentina along the way.

This tie was an epic affair. The away team struck first through Sheringham, quickly followed by fellow England international Anderton’s toe-poke finish.

Wednesday came out fighting in the second half, pulling a goal back through Petrescu. Then followed a calamity from former Nottingham Forest, Hibernian and, until recently, Cambridge United manager Colin Calderwood, as he powered a clearance into the roof of his own net.

Spurs reclaimed the lead in the 71st minute through Premier League legend Nicky Barmby, followed quickly by Klinsmann’s iconic headed finished that prompted the now famous celebration. Though he would finish on the winning side, his day ended with him being carried off on a stretcher after a heavy clash of heads with Walker.

Wednesday managed to pull one back through injury blighted striker, David Hirst, but it proved to be a mere consolation in the end.

Unfortunately the season wouldn’t end in glory for either club. Spurs finished outside the European places in 7th, while Wednesday came in a disappointing 13th after an injury plagued campaign.

Neither manager would even make the finish line, with Ardiles sacked in November and replaced by Gerry Francis, whereas Trevor Francis (no relation) was let go in May.

Crystal Palace 1-6 Liverpool – 1994
This opening day served up two seven-goal thrillers – what a shame they came during the pre-red button days of football coverage.

In what was the third season after the Premier League rebrand, both these sides had contrasting ambitions for the season ahead. Palace, fresh off the back of promotion to the Premier League, were expecting a relegation battle. Liverpool, managed by Roy Evans, had finished a mediocre 8th in the league the previous campaign, and had their sights set on European qualification.

This meeting between the sides at Selhurst Park burst into life when Liverpool stalwart Rob Jones was brought down in the box by defender Simon Rodger. Dane Jan Mølby stepped up to confidently convert the resulting penalty, and the floodgates opened up. Liverpool went into the break 3-0 up after a stunning strike from Steve McManaman and a typically clinical finish from master poacher Robbie Fowler.

Into the second half and Palace hopes were revived when they pulled one back through Chris Armstrong’s header. Hopes were almost immediately dashed however, as Liverpool followed up with three quick-fire goals in 14 minutes, with Ian Rush and McManaman securing a brace each.

Liverpool went on to have a successful season, finishing 4th and qualifying for the UEFA Cup. They also lifted the Coca-Cola Cup, beating Bolton Wanderers of Division One 2-1 in the final thanks to another brace from Spice Boy McManaman.

Palace, on the other hand, endured a topsy-turvy season. They made it to the semi-final of both domestic cups, losing to Manchester United in a replay and to Liverpool over two legs. They finished fourth from bottom, but the Premier League was streamlined to 20 clubs from 22 that season, and they were quite unfortunately relegated.

In the aftermath the Palace team was utterly dismantled, with star players Gareth Southgate and Armstrong sold on to Aston Villa and Spurs. Manager Alan Smith was also sacked, replaced by managerial journeyman Steve Coppell in June of 1995.

Southampton 3-4 Nottingham Forest – 1995
The following season saw another opening night cracker, and yet another away team on the right end of a 4-3 scoreline.

Despite finishing the previous campaign a respectable 10th, Southampton were in transition, having just replaced manager Alan Ball with long-time club coach David Merrington. Pundits and fans alike were not optimistic about their prospects.

Equally, Forest were expected to toil, due in large part to the sale of star man Stan Collymore to Liverpool in July.

After ten minutes Forest and Middlesbrough legend Colin Cooper brought the game to life, smashing a free-kick into the top corner. Southampton captain Matt Le Tissier won a penalty almost immediately after, which he duly converted himself.

Just before half-time Forest raced into a two-goal lead with strikes from Ian Woan and Dutchman Bryan Roy. Le Tissier pegged one back for Southampton, before Roy restored the two-goal cushion for Forest when he struck again ten minutes before the end. Despite captain fantastic Le Tissier’s best efforts, capped by his 81st-minute hat-trick goal, he would unjustly end up on the losing side.

Forest surprised everyone with their consistent form that season, finishing a satisfying 9th in the table. Southampton, however, flirted with relegation and finished perilously close to the void: 17th.

Everton 1-6 Arsenal – 2009
This 2009 rout should still be fresh in Premier League fans’ memories, especially for those of an Arsenal persuasion.

The Gunners, under the stewardship of Arsene Wenger, had experienced a reasonably successful previous season, finishing 4th in the Premier League and reaching the Champions League semi-final. There was pessimism, however, with the club only making one acquisition in the summer: defender Thomas Vermaelen from Ajax for £10million. Fans were left feeling short-changed, especially after the loss of stars Emmanuel Adebayor and Kolo Touré to big-spending Man City in the summer.

This season marked the seventh in charge for Everton manager David Moyes. The team were riding the wave of a campaign which saw them finish 5th in the league and reach the FA Cup final. They were busy in the transfer market, bringing in Russian Diniyar Bilyaletdinov, defenders Sylvain Distin, Johnny Heitinga, Lucas Neill and, though he would never make a Premier League appearance for them, future Arsenal misfit Shkodran Mustafi.

This match was a slow burner – that is until Arsenal’s Denílson rifled a shot past a helpless Tim Howard in the 26th minute. A deluge of goals ensued, with strikes from defenders Vermaelen and William Gallas before the break.

The second half began much as before, with captain Cesc Fàbregas adding a stylish fourth, followed by his second, and Arsenal’s fifth, shortly after. Brazilian-born Croatia striker Eduardo capped off the Arsenal scoring, before Everton striker Louis Saha bagged a consolation goal in stoppage time.

What a strike from Denilson this was! 😱🚀 pic.twitter.com/ZxkCZ5UJzm

Everton went on to have a underwhelming season, finishing 8th and failing to progress beyond the fourth round in both domestic cup competitions.

Arsenal, too, flattered to deceive, ending up a disappointing 3rd behind rivals Chelsea and Man United, and knocked out of the Champions League at the quarter-final stage by Barcelona.

Arsenal 4 Leicester 3 – 2017
The only opening day match that season, Premier League chiefs must have been over the moon with this one.

Hosts Arsenal were on the back of a fifth-place finish the previous campaign, and without Champions League football there were growing calls for manger Wenger to move on. The Frenchman’s 21st season in charge saw Arsenal plunge into the transfer market, signing Sead Kolašinac, Alexandre Lacazette, Henrikh Mkhitaryan and Pierre-Emerick Aubameyang across both windows.

Premier League champions two seasons previous, Leicester were on the back of a displeasing 12th place finish in the 2016/2017 season. Keen on a return to the Champions League places, they also dipped into the market for Harry Maguire from Hull, Kelechi Iheanacho from Man City, Vicente Iborra from Sevilla and Adrien Silva from Sporting Lisbon.

Arsenal were quick off the blocks in this encounter, with new signing Lacazette opening the scoring in the second minute. Leicester bounced back five minutes later through striker Shinji Okazaki, before finisher supreme Jamie Vardy put The Foxes ahead. Danny Welbeck sent Arsenal into the break on level terms, tapping in a Kolašinac pass from close range.

Though Arsenal started the second half the brighter, Leicester went back in front through Vardy when the striker nodded home from a corner. Arsenal, showing great character, fought back with Aaron Ramsey equalising, before super-sub Olivier Giroud scored a dramatic winner.

In what would prove to be Wenger’s final season in charge, Arsenal would have another altogether disappointing season, finishing an underwhelming 6th in the league and losing to future champions Atlético Madrid in the Europa League semi-final.

Unsurprisingly Leicester couldn’t repeat a modicum of their heroics from the 2015/2016 season. They finished mid-table in the league and were knocked out of both domestic cups at the the quarter-final stage.