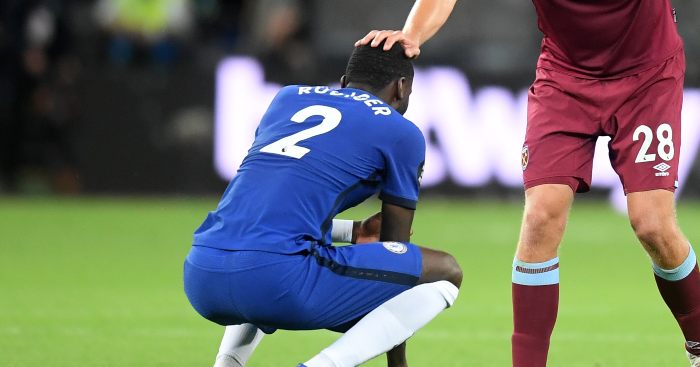 We’ve had the Premier League’s unsung heroes to make everyone feel all warm and fuzzy, so now of course it’s time to put the boot right in. Let’s give each club’s oversung villain a right good kicking.

Couple of things to get out of the way first. Is oversung the opposite of unsung or indeed even a word? No, it is not. Sorry about that. Secondly, saying these players are oversung (sorry again) in no way equates to saying they are sh*t. It can do, in some cases. But it definitely doesn’t automatically mean that. Okay? Good. Let’s crack on.

Arsenal: Matteo Guendouzi
Like several players on this list, not in any way a bad footballer (repeat: not calling him sh*t, can’t stress that enough) but one whose reputation seems out of whack. Again typically of others on this list – notably in the equally miserable other half of north London – this is perhaps more to do with the wider failings of club than player. Guendouzi’s all right, isn’t he? But he gets an awful lot of praise for “running around” and “caring”, which all seems like it should be way beneath Arsenal. That’s not even Spursy, that’s full West Ham.

Recent events have seen the overdue commencement of what we’re grandly calling The Guendouzi Backlash, but while Arsenal remain the home of absolute piss-taking wastrels who aren’t even prepared to suffer serious sunburn for the cause, Guendouzi’s star will continue to rise, with the inevitable backlash to the backlash only amplifying the noise.

Aston Villa: Tyrone Mings
The heart of the Premier League’s leakiest defence yet apparently also the man to solve Arsenal’s defensive woes. This one probably also says more about Arsenal than it does about the player. The rest won’t be about Arsenal, I promise.

Bournemouth: David Brooks
There is no easier route to oversungness than to be very, very good and then to be out injured for an extended period of time during which your team is conspicuously and alarmingly shite. Brooks had absolutely nailed it before the Covid came along, messing everything up and now forcing him to actually play in a team that remains, despite the talisman’s return, bobbins.

Brighton: N/A
No Brighton player could ever be oversung. The very idea is ludicrous.

Burnley: James Tarkowski
Tricky one given that Burnley’s whole schtick is being unsung and underrated and underestimated and then suddenly bloody hell would you look at that they’ve as many points as Spurs. Dwight McNeil has become a player that pundits like to focus on but given his numbers in a team on the fringes of European qualification he’s probably still only adequately sung at best. Ben Mee is also correctly sung for calling out the WLM plane for the c***’s trick that it was. So Tarkowski it is then because the one part of Burnley’s football that does get praised is their defending and there’s a tendency to oversing all English centre-backs because once upon a time we genuinely had daft numbers of great ones.

Chelsea: Antonio Rudiger
For some inexplicable reason, appointed the chief superintendent of the Keystone Kops because he had that one good season and is slightly older than the rest. But in any other team he would be cast in the David Luiz role.

Gary Neville’s gone off on one on Alonso, and yes he should have run back quicker. But the CBs are far more culpable. Christensen had no chance of winning the ball after Antonio laid it off. And Rudiger has clearly never seen Yarmolenko play football.

Crystal Palace: Wilfried Zaha
The saddest thing is that this might not actually be true. Is he even all that sung these days? Is he already yesterday’s man? Has another chance at a bigger club already passed him by? Couple of years ago he was the quintessential Best Player Outside The Big Six. Now there isn’t even a big six to be the best player outside of, but if there was, Wilf wouldn’t be it.

Everton: Gylfi Sigurdsson
Tricky one for a number of reasons. Events across Stanley Park have overshadowed Everton more than ever this season, making it harder still for those in blue to get excessively hyped. Previously oversung Toffees – your Jordan Pickfords, your Michael Keanes, the Yerry Minas of this world – have all now seen significant recalibration. Lucas Digne is accurately and appropriately highly sung. Dominic Calvert-Lewin and Richarlison too. Everton fans probably don’t oversing any of their current squad, but an entirely unscientific guess says that most neutrals would be surprised to learn Gylfi Sigurdsson has just two goals and two assists from 29 Premier League games this season, so let’s go with that.

Leicester: Ben Chilwell
He’s very good, obviously, but the improvements he’s made to his own game to make the England left-back spot his own have at the very, very least been matched by all his rivals for the position making assorted bollockses of things.

Liverpool: Jordan Henderson
Alright, calm down. Fine player, composed and impressive leader, definitely much, much better than Eric Dier and no doubt owner of a strikingly handsome glans. But it’s still all got a bit much, hasn’t it? In Henderson’s defence, there are only about six players in the entire history of the game who could have received the praise Henderson has this season without becoming oversung.

Manchester City: Ederson
Yes, distribution blah blah blah initiating attacks whatever deep-lying playmaker wibble better passer than De Bruyne and so forth. He is a goalkeeper who is very often very alarmingly shit at stopping shots going in his goal. Of course all goalkeepers make mistakes and of course all goalkeeping mistakes look bad, but Ederson’s are often as fundamental as quite literally standing in the wrong place. Like this one, from about 400 years ago in the second week of the season, which remains one of the campaign’s least explicable bits of goalkeeping:

You can at least understand what has gone wrong when a keeper lets one through his legs or is beaten for pace at his near post or whatever. But this goal still freaks my nut to this day. Genuinely, how has that happened? How does any professional goalkeeper get beaten so comprehensively by a shot from that distance at that pace so close to the middle of the goal? How? HOW?? HOW???

Manchester United: Harry Maguire
It remains impossible to fully shake the grossly unfair idea that Harry Maguire is a League Two centre-back who has accidentally become international class, possibly as a result of some sort of idle game concocted by the football gods to pass the time and confuse us all. We know he is A Leader and that he has A Very Large Head but that isn’t enough is it? Surely there must be more to being a £75m Manchester United player than that? Also the subject of one of the greatest and most accurate descriptions of any footballer ever:

Newcastle: Jamaal Lascelles
We will level with you – this was Allan Saint-Maximin before this. So instead we will remember all those calls for a Lascelles England cap because he was young and a captain and a captain and young. Gareth Southgate – a man who spent much of his career in the north-east and lives in Harrogate – was accused of being London-centric for ignoring him. Turns out that perhaps the career centre-back knows a thing or two about centre-backs. Lascelles is mostly just okay.

Norwich: Max Aarons
One classic route to oversungness: impress for a team that is struggling absolutely, get linked to big teams that are struggling relatively. Why hello there, Maximillian. And which particular slice of north London misery can we interest you in next season?

Sheffield United: Dean Henderson
It’s a double Henderson in the oversung charts. Hard for a mere Sheffield United player to get oversung. Not one of the big clubs, and they’re in the north. Doesn’t matter that they spent the first three-quarters of the season making mugs of all but the division’s biggest fish, plenty of people will still deem their post Project Restart woes as the universe correcting itself. So, Sheffield United players? Not oversung. Sheffield United players performing at a high level while on loan from Manchester United in a position where the struggles of their incumbent are now a huge talking point? Now you’re talking.

Southampton: Danny Ings
No, shut up, wait. Listen. I’m not having a go at him. Danny Ings is good. Nobody is saying he isn’t. But I’ve conducted another unscientific and largely fictitious poll mainly in my head and Ings is without doubt the Premier League player about whom rival fans are most likely to say “Danny Ings, ffs, he always plays like Messi against us”. By definition, this cannot be true. Ings, it is reasonably uncontroversial to state, is not as good as Messi and therefore cannot be said to always play like him against everybody. Ipso facto, oversung.

Tottenham: Harry Winks
A perfectly decent neat and tidy Premier League midfielder who, thanks to Spurs’ unerringly wonky recruitment in this area, has had extra qualities and frankly unreasonable expectations, hopes and dreams projected on to him by an understandably vexed fanbase who are ultimately not even really deceiving themselves. “Don’t need to spend Daniel’s precious money on the midfield, we’ve got Harry Winks. He’ll make everything okay. Winksy. Tinksy Winksy. Little Harry Winks. Bossed Real Madrid that time, didn’t he? One of our own. Look at his pass completion stats. He’s the next Xavi. Sob.”

Watford: Gerard Deulofeu
A highlights compilation player who would, one suspects, nevertheless be welcomed by surprising numbers of supporters at bigger clubs who would insist he could offer “something different” and provide “an option from the bench”. The lure of that Barcelona pedigree is strong.

West Ham: Declan Rice
Given the long and proud history of West Ham players having their tyres pumped by a hack pack that contains a disproportionate number of Hammers fans (see the concerted and baffling decade-long Noble For England campaign, for example) the current squad contains relatively few contenders. Could be a troubling sign of just how bleak things are at the club right now, which, looking back through this list, is something of a recurring theme in London at the moment. Declan Rice, though. He was the next big thing for a while there, wasn’t he? At best stagnating and at worst regressing alarmingly at a mess of a club under an uninspiring manager and looking a world away from justifying all the fuss and attention that surrounded the whole England-Ireland tug-of-war farrago.

Wolves: Adama Traore
He’s proper amazing but, as with Henderson, it’s all just got a bit much, hasn’t it? You’d think he’d actually invented the pinpoint cross the way some people bang on about it.