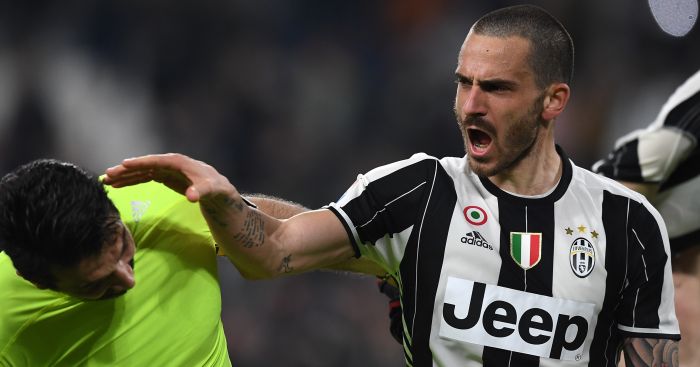 Juventus centre-back Leonardo Bonucci has revealed that he loves the “passion” from the terraces in England and has admitted to being “fascinated” by the Premier League.

The Italy international has been linked with a move to the Premier League over the last year and specifically to Manchester City where Pep Guardiola is known to be an admirer of the 29-year-old.

The City boss has even come out and publicly praised the defender in the past but Bonucci isn’t getting carried away with the kind words from Guardiola.

“When the best manager in the world says you’re one of his favourite players, you act like it’s nothing, but you still can’t help but have a smile on your lips,” Bonucci told So Foot (translated by Sport Witness). “This praise only confirms my important progress. It’s always nice.”

Competition is healthy for the two centre-back spots at Juventus with Giorgio Chiellini, Andrea Barzagli and Daniele Rugani all vying for a spot in the team with Bonucci.

And Bonucci expressed his “love” for the English game in the interview with So Foot and didn’t rule out a move to the Premier League.

“It fascinates me,” Bonucci continued. “When I can, I watch English games, and not only for the quality of the players on display. I’m hot-headed, and I love the passion that exudes from their packed stands. It’s for that kind of thing that I’m the first on the training pitch and the last to return the changing room.”