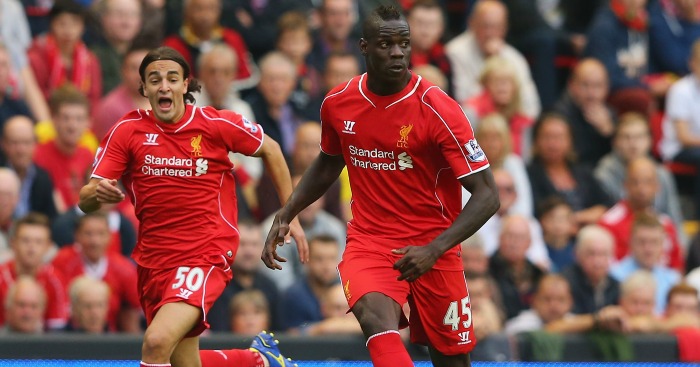 Players must have been fit and available for selection…

BOURNEMOUTH
Ryan Allsop – Behind Artur Boruc and Adam Federici in the pecking order.
Rhoys Wiggins – Re-signed from Sheffield Wednesday in January but has yet to play.
Baily Cargill – Four loan spells away from the club and another could beckon.
Marc Pugh – Fallen out of favour after making 26 league appearances last season.
Eunan O’Kane – Linked with a move to Leeds or Wigan with only a year left on his contract.
Emerson Hyndman – Summer signing injured in pre-season but is set to be given debut in cup.
Lys Mousset – New £5.4m striker expected to play a part in League Cup.
Josh O’Hanlon – Sent on loan five times and looks no closer to first-team action.

BURNLEY
Nick Pope – Signed from Charlton but veteran Paul Robinson remains second-choice stopper.
Danny Lafferty – 16 minutes of Premier League football in 2014/15 but spent last season on loan at Oldham.
Kevin Long – Defender linked with a move to Barnsley or Bristol City.
Tom Anderson – Extended contract in the summer but yet to make Clarets debut after a spell on loan at Chesterfield last term.
Rouwen Hennings – 26 league appearances last season but only three of which were starts.

CHELSEA
Kenedy – 14 league appearances last season but linked with a loan move to Watford earlier this month.
Matt Miazga – Could form a central defensive partnership with Papy Djilobodji at Sunderland. Christ.
Kenneth Omeruo – Already had three loan spells, including one at Middlesbrough, and will inevitably be sent out again.
Cristian Cuevas – Signed from the brilliantly named Chilean club O’Higgings, sent out on loan four times since. Obviously.
Juan Cuadrado – Expected to rejoin Juventus on loan.
Marco van Ginkel – Helped PSV to the Dutch title last season and could join them permanently.
Christian Atsu – Unsurprisingly being linked with a loan move. Never actually played for Chelsea.
Lucas Piazon – Has actually played in the Premier League once. Will leave on loan. Again.
Loic Remy – Fallen way, way, way out of favour but could stay at Stamford Bridge if Antonio Conte fails to land another striker.
Patrick Bamford – Just loan him out already.

CRYSTAL PALACE
Zeki Fryers – Three minutes of Premier League football to his name for Palace and that was two seasons ago.
Jonathan Williams – Impressed for Wales at Euro 2016 this summer, ten minutes of Premier League football last term.
Hiram Boateng – Midfielder made his league debut in February before being sent on loan to Plymouth Argyle.
Fraizer Campbell – Once played for England. Will never play for England again.
Kwesi Appiah – The 26-year-old striker has been loaned out seven times by the club; he’s probably not in Alan Pardew’s plans.

EVERTON
Darron Gibson – Handed a two-year contract extension at the start of the summer after appearing in all of 17 league matches over the last three seasons.
Aiden McGeady – Winger spent a spell on loan at Sheffield Wednesday last season and remains out of favour at Goodison Park, without a squad number.
Oumar Niasse – Fourth-most expensive Everton player told by Ronald Koeman to leave the club if he wants to play football. Left without a squad number this season.
Shani Tarashaj – Striker was signed in January before being loaned back to Grasshopper Zurich. Also made Switzerland’s squad for Euro 2016.
Leandro Rodriguez – Uruguayan made his Everton debut in the FA Cup last season before an injury-curtailed loan spell at Brentford.
Conor McAleny – Now 24 and has been loaned out by the Toffees five times. Made two substitute appearances for Everton in the Premier League in December 2011.

HULL CITY
Unsurprisingly have no fit senior players who are yet to make the bench.

LEICESTER CITY
Ben Hamer – Relegated to third-choice goalkeeper following arrival of Ron-Robert Zieler.
Ritchie de Laet – Defender won both the Premier League title and promotion with Middlesbrough last term and is now in talks with Aston Villa.
Marcin Wasilewski – Veteran defender made only four league appearances last season.
Gokhan Inler – Leicester’s marquee signing last summer made only five league appearances and is set to leave after not being handed a squad number.
Matty James – Missed the whole of last season with a knee injury but is now back in contention.
Tom Lawrence – Wales international was signed from Manchester United two seasons ago but has failed to establish himself in Foxes’ first team and is wanted by a host of Championship clubs.

LIVERPOOL
Andre Wisdom – Full-back who last appeared for Liverpool three years ago.
Connor Randall – Appeared in pre-season and is currently Jurgen Klopp’s second-choice right-back.
Lazar Markovic – £20m winger expected to leave Anfield this summer after spending last season out on loan.
Luis Alberto – Another super buy from Brendan Rodgers, the Spaniard’s Liverpool career totals nine substitute appearances in the Premier League three seasons ago.
Danny Ings – Striker told by Klopp to bide his time to be given a chance in the first team this year.
Mario Balotelli – Linked with a host of clubs but as yet nobody wants to take a chance on the controversial striker.

MANCHESTER CITY
Eliaquim Mangala – Pep Guardiola deems Aleksandar Kolarov a better option at centre-back than the France international.
Jason Denayer – Belgium international hoped to break into first team but now appears set to leave on loan once more.
Yaya Toure – Another player exiled by Guardiola. The midfielder will most likely leave if another club can pick up his mammoth wages.
Samir Nasri – Told Guardiola he will be “lucky” to have a player of his ability; banned from training with first team for being overweight.
Oleksandr Zinchenko – Teenager signed this summer but could be sent out on loan to gain further experience.
Bruno Zuculini – Argentina youth international’s only City appearance was in the Community Shield two years ago. Since then the 23-year-old has been sent on loan four times.
Wilfried Bony – West Ham are interested; Pep Guardiola is not.

MANCHESTER UNITED
Sam Johnstone – Third-choice goalkeeper.
Matteo Darmian – Jose Mourinho is clearly unconvinced by the Italy international, who could leave if United manage to sign another right-back.
Phil Jones – Fallen further down the pecking order following the arrival of Eric Bailly and could now join Stoke.
Tyler Blackett – Reading have confirmed their interest in the centre-back, who made three substitute appearances on loan at Celtic last term.
Bastian Schweinsteiger – World Cup winner has been frozen out by Mourinho and is reportedly paying the price for being associated too closely with Louis van Gaal.
Andreas Pereira – On the fringes of the first team in the last two seasons but is unlikely to be given many opportunities by Mourinho.
Timothy Fosu-Mensah – Mourinho insists the youngster will be an “important first-team player” this term.

MIDDLESBROUGH
Tomas Meijas – Boro have four goalkeepers; Meijas has the honour of being fourth choice.
Fabio – Signed from Cardiff but George Friend is already established at left-back.
Dael Fry – Highly-rated centre-back, only 18, may have to bide his time for an opportunity in the top flight.
Carlos de Pena – Winger has failed to make an impact since joining Boro last season, making only six appearances in the Championship.
Mustapha Carayol – Not given a squad number and spent last season on loan at Huddersfield and Leeds.
Adam Reach – Spent last season at Preston and is expected to secure a move back to the Championship.

SOUTHAMPTON
Cuco Martina – Scored that wonder goal against Arsenal but remains behind Cedric Soares in the pecking order.
Jack Stephens – One substitute appearance in the FA Cup and four loan moves sums up the defender’s Southampton prospects.
Harrison Reed – 14 appearances for the club over the last three seasons, the 21-year-old may need to leave to find more regular first-team football.
Lloyd Isgrove – The winger became a Wales international while on loan at Barnsley but has only ever made one substitute appearance for the club.
Sam McQueen – Midfielder, now 21, has only played senior football on loan at Southend last season.

STOKE CITY
Daniel Bachmann – Gets to act as third-choice goalkeeper while Jack Butland is injured.
Dionatan Teixeira – Defender has made one substitute appearance in each of the last two seasons so there is still hope yet.
Joselu – Striker handed the number 9 shirt ahead of the new season but Peter Crouch has been preferred on the bench so far.

SUNDERLAND
Charis Mavrias – Last appeared in the league for Sunderland in September 2013.

SWANSEA CITY
Mark Birighitti – Third-choice goalkeeper.
Gerhard Tremmel – Fourth-choice goalkeeper. Old.
Franck Tabanou – Left-back made three cup appearances last season before rejoining St-Etienne on loan. Poised to leave permanently before the window shuts.
Connor Roberts – Young right-back impressed on loan at Yeovil last term and could be given a chance this season.
Marvin Emnes – Forward has managed to remain at Swansea despite always seeming out of favour, but is finally expected to leave this summer.

TOTTENHAM
Kieran Trippier – Right-back is a target for Aston Villa after failing to oust Kyle Walker at White Hart Lane.
DeAndre Yedlin – Spent last season on loan at Sunderland and is expected to leave the club again.
Nacer Chadli – Featured heavily, albeit from the bench, last season but the attacker’s days in north London appear numbered.
Nabil Bentaleb – Mauricio Pochettino has made it clear the midfielder does not feature in his plans. When you’re behind Ryan Mason…
Clinton N’Jie – Pochettino insists he still wants him…just not on his Premier League bench.

WATFORD
Rene Gilmartin – Third-choice goalkeeper.
Giedrius Arlauskis – Fourth-choice goalkeeper was loaned out to Espanyol last term.
Christian Kabasele – Watford spent £5.8million to sign the defender from Genk this summer but the Belgium international is yet to be given a chance.
Juan Carlos Paredes – Only seven league starts last term and has been linked with a move to Turkey.
Sean Murray – The midfielder is being chased by a number of League One clubs despite failing to make an impression on loan at Wigan last term.

WEST HAM
Raphael Spiegel – Third-choice goalkeeper.
Diego Poyet – Gus’ lad has had spells out on loan in each of the last three seasons and another is likely to follow.