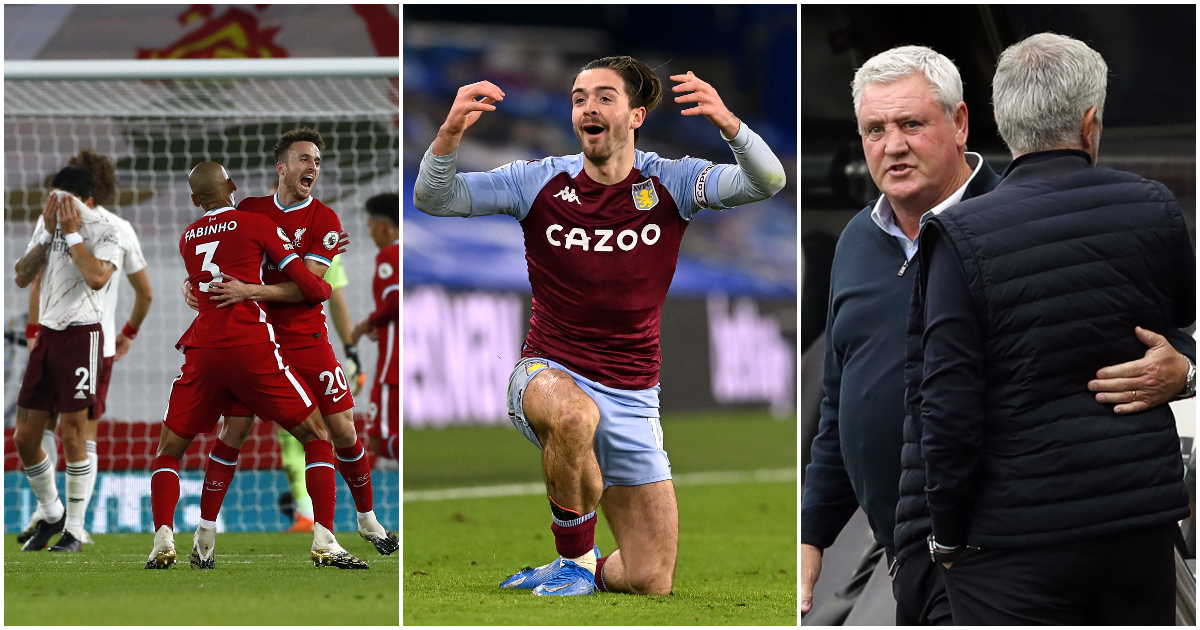 Neither Arsenal nor Liverpool are where they would want to be but both have good run-ins and plenty to play for. The Premier League is back.

Game to watch – Arsenal v Liverpool
Two members of not just the Big Six but the Original Big Four that preceded it who currently find themselves outside the top six after stuttering campaigns of contrasting predictability. Both teams will probably consider Europe their best hope of salvation for the season, but neither are quite yet done on the domestic front. The failures of others to fully capitalise on their woes means that both could find themselves safely back inside that top six – Liverpool could yet still reach the top four if something goes wrong for Chelsea or Leicester – and neither have particularly arduous run-ins after this game.

Arsenal were certainly trending upwards before the international break, albeit remaining quite resolutely Arsenal about it all. The wins over Leicester and Spurs were both highly impressive, but they were punctuated by an absurd 1-1 draw at Burnley and the nonsense of that 3-3 at West Ham.

Liverpool will hope that the two-week break has allowed some kind of normality to return to their own form, because it has been equally silly. They have finally put centre-backs at centre-back and midfielders in midfield, so could be well-placed to exploit that nice-looking run-in. They need to hit the ground running now, though, if their league season is to be salvaged. While they’ll want their form to return to some kind of sanity, their last five league games have all been won by the away side so they’ll be happy for that to continue for one more weekend at least.

Managers to watch – Bruce and Mourinho
We can’t recommend watching the game, because it’s sure to be absolutely hideous. Bruce and Newcastle will try to make it horrendously dull; Mourinho and Spurs will most likely be unable – or unwilling – to prevent them.

But it will nevertheless be grimly fascinating to watch the two least popular managers in the division do battle in a Super Sunday Misery Derby that will certainly see the stock of one fall ever lower. If we’re really lucky, it could even be both. A 1-1 draw in which Harry Kane’s controversial penalty gives Spurs a first-half lead before Jamaal Lascelles bundles home an 83rd-minute equaliser from a corner should do the trick.

Player to watch – Jack Grealish
For all that Villa recruited admirably last summer to take some of the load off Jack’s shoulders, taking Grealish out of Aston Villa’s team remains perhaps the most significant removal of a single player for any team in the division.

It’s also true that Villa’s slide back towards mid-table predates Grealish’s recent absence. They’ve won only four of 15 Premier League games since Boxing Day. They also secured an impressive win at Leeds without their talisman.

Since then, though, it’s been pretty grim with the non-performance against a humiliated and dispirited Spurs side absolutely there for the taking before the international break particularly disappointing.

The international break certainly came at a good time for Villa, whose idle dreams of Europe may have faded but who should still be eyeing a solid top-half finish that would cement the impressive progress that has been made since the back end of last season. The whole squad has a chance to reset and go again, with Grealish now once again available with his injury problems now, in Dean Smith’s words, “under control”. That sounds… positive, if not quite a clean bill of health. Either way, Fulham at home isn’t the worst fixture to start afresh for club and player alike.

Team to watch – Leicester
Manchester City will win the league. Manchester United will finish in the top four. We’re fairly sure Chelsea will also finish in the top four given their squad now they’ve got themselves back up there with a proper manager. That means, at the top end of the table at least, Leicester are going to be a team to watch pretty much every weekend from now until May. Because a) they are currently in the top four; b) they probably should remain in the top four given the cushion they’ve got; c) they f***ed it from a similar position last year; d) they have mad injury problems; and perhaps most importantly e) they have an absurd fixture list.

The Foxes still have to play all five current other members of the top six in their nine remaining games, three of them away from home. First up it’s Manchester City and it is at least a home game. And against a side they spangled 5-2 in the reverse fixture which is in no way misleading.

Looking at the table and viewing this match in isolation, it should be a free roll for Leicester really, defeat being both expected and easily dealt with. But for all the reasons outlined above it just isn’t quite that simple. Leicester don’t need to start the run-in after a break with anything that stirs memories of what happened last season. Defeat here turns West Ham away next weekend into a horribly trappy occasion and could make the FA Cup semi-final against Southampton more fraught than it needs to be.

Or they could just beat City, maintain that nice cushion and know they can put West Ham at least pretty much out of sight next weekend. They should definitely do that, to be honest.

Football League game to watch – Huddersfield v Brentford
With the rest of the Championship round taking place on Good Friday, both Huddersfield and Brentford might be feeling a bit more pressure by the time they kick off on Saturday lunchtime. With Watford currently flying and facing Sheffield Wednesday at home, it’s likely the automatic promotion spots are going to have moved further away from stuttering Brentford before they get a chance to do anything about it, while Huddersfield may find themselves that bit closer to the trapdoor.

With potential impact on both ends of the table, this would be an intriguing watch even before you consider that, despite 14 places separating these sides in the table there’s currently rather less in it than that with Huddersfield taking six points from their last four (unbeaten) games and Brentford just five.

European game to watch – PSG v Lille
Couple of cracking title races afoot in Europe’s big leagues, but none better than in France where PSG have been mortal with trophy-averse Mauricio Pochettino in charge now. Just four points separate the top four going into the final eight games of the season, and at least one of the top two is going to drop points here. That’s just maths and the fundamental basics of football matches.