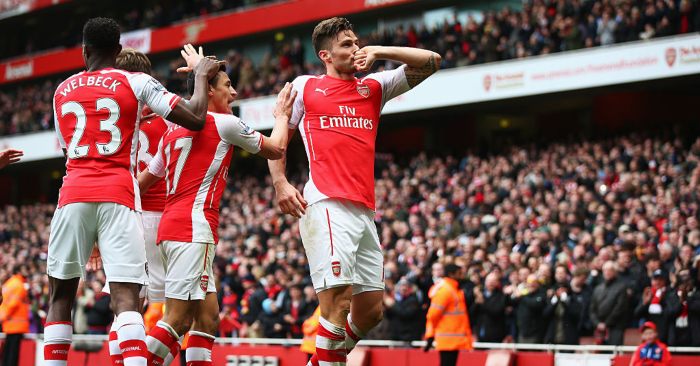 Game to watch: Arsenal v Liverpool
The absurdity of calling this a Big Six clash is exposed by one glance at the Premier League table that shows a 43-point gap between the two ‘rivals’. Another glance at the ‘rivals” head-to-head record shows that it has been over five years since Arsenal last won this fixture. That was a season (2014/15) that ended with Arsene Wenger’s Arsenal 13 points clear of Brendan Rodgers’ Liverpool. Neither could lay a glove on Chelsea. Rather a lot has changed in the intervening five years.

The line-ups for that 4-1 win are pretty instructive. Arsenal boasted a mouth-watering front five of (peak) Mesut Ozil, Aaron Ramsey, Santi Cazorla, Alexis Sanchez and Olivier Giroud, so it’s little wonder that Simon Mignolet, Emre Can, Mamadou Sakho, Kolo Toure and Alberto Moreno struggled to contain them. That Liverpool’s net spend is comfortably less than half Arsenal’s total over the intervening five years should be an embarrassment to Arsenal that will not be erased by one decent result.

But one decent result could at least eradicate some of the embarrassment of being beaten 2-1 by Jose Mourinho’s Tottenham (16 Conclusions here) on Sunday. It would indicate that not all strides are backwards and not all the optimism generated by four consecutive victories was misplaced.

It’s hard to envisage this Arsenal defence – or any Arsenal defence in recent history – keeping out this Liverpool attack, but it’s not impossible. It will be intriguing to watch them try and put a stick in the spokes of the Reds’ 100-point wheels. We might not be ready to let go of that Big Six moniker just yet.

Manager to watch: Frank Lampard
“I learned a lot today – I learned a lot that I won’t forget. We might be outside the top four when we play again but it’s not about that right now – I’m more concerned about this performance. I know we can’t approach our games against Norwich, Manchester United, Liverpool or Wolves in the same vein.”

That was the reaction of Frank Lampard to a 3-0 dismantling by Sheffield United; this was ours. And so comes the first of those remaining four games with Chelsea still in the top four thanks to Leicester sh*tting the bed and Manchester United’s bubble getting a slight puncture, but now with the knowledge that fourth place is the very lowest they can drop and retain their Champions League status.

Now comes the test for there are plenty who doubt Lampard is equipped to fix a defence that has the worst defensive record in the top half of the table. Can he engender a reaction against Norwich this week? Does he even know how?

The issue of defense is not JUST a personnel problem. We had these same players under Maurizio Sarri & we had the 3rd Best defensive record last season! So, this is also down to the coach. Lampard needs to figure out the systematic issues if he wants to compete at the top

Player to watch: Anthony Martial
The best player on the pitch on Monday night as some of Manchester United’s chickens came to roost, and probably the most in-form striker in the country. Michail Antonio has scored more but that Norwich defence offered no resistance; against Southampton on Monday night, Martial had to be excellent to score and had to be excellent to set up Marcus Rashford.

The Frenchman – finally trusted as a striker – has now notched 16 Premier League goals and should be flirting with the 20-goal mark with games against Crystal Palace, that Chelsea defence, West Ham and a rotting Leicester to come. When he is in this kind of mood with this kind of target, he is an absolute pleasure to watch.

Team to watch: Sheffield United
You should always relish the chance to watch this Sheffield United side, but this Sheffield United side buoyant after their 3-0 humbling of Chelsea? Can you get the kids to bed before 6pm on Thursday? The contrast between their performance – organised, incisive, unwavering – and that of Leicester this weekend hints at a delicious fixture which could put a final nail in the coffin of the Foxes’ Champions League hopes.

Ignore Graeme Souness because the Blades’ success does not begin and end with desire but instead speaks volumes about Chris Wilder’s tactical knowledge and communication skills, as well as the willingness of his players to embrace and enact his plans. Together they are undoubtedly better than their component parts would suggest but there is talent within that squad – more than enough to give a hiding to a Leicester side crumbling before our very eyes. You should watch and so should every Championship manager.

Football League game to watch: West Brom v Fulham
First, it’s at 5pm on a Tuesday and that is no time and yet the perfect time to be watching a high-quality game of Championship football.

Third, if you have not seen Matheus Pereira yet, you are in for a treat.

19 assists for Matheus Pereira this season!

Here’s his beautiful through-ball for Grosicki’s goal against Hull today:pic.twitter.com/eHjFjBYU4F

European game to watch: Porto v Sporting
Assuming that Benfica do not ‘do a Man City’ and gift Porto the title on Tuesday night by failing to beat Vitoria, this is the game which should see Porto declared champions. How lovely to claim that title with victory over one of their oldest rivals. But how equally lovely to win a fixture for the first time in four years and prolong the title wait for one of your fiercest rivals.

And you get to watch Alex Telles for probably the first real time and instantly decide whether he is good enough/too good for Chelsea.