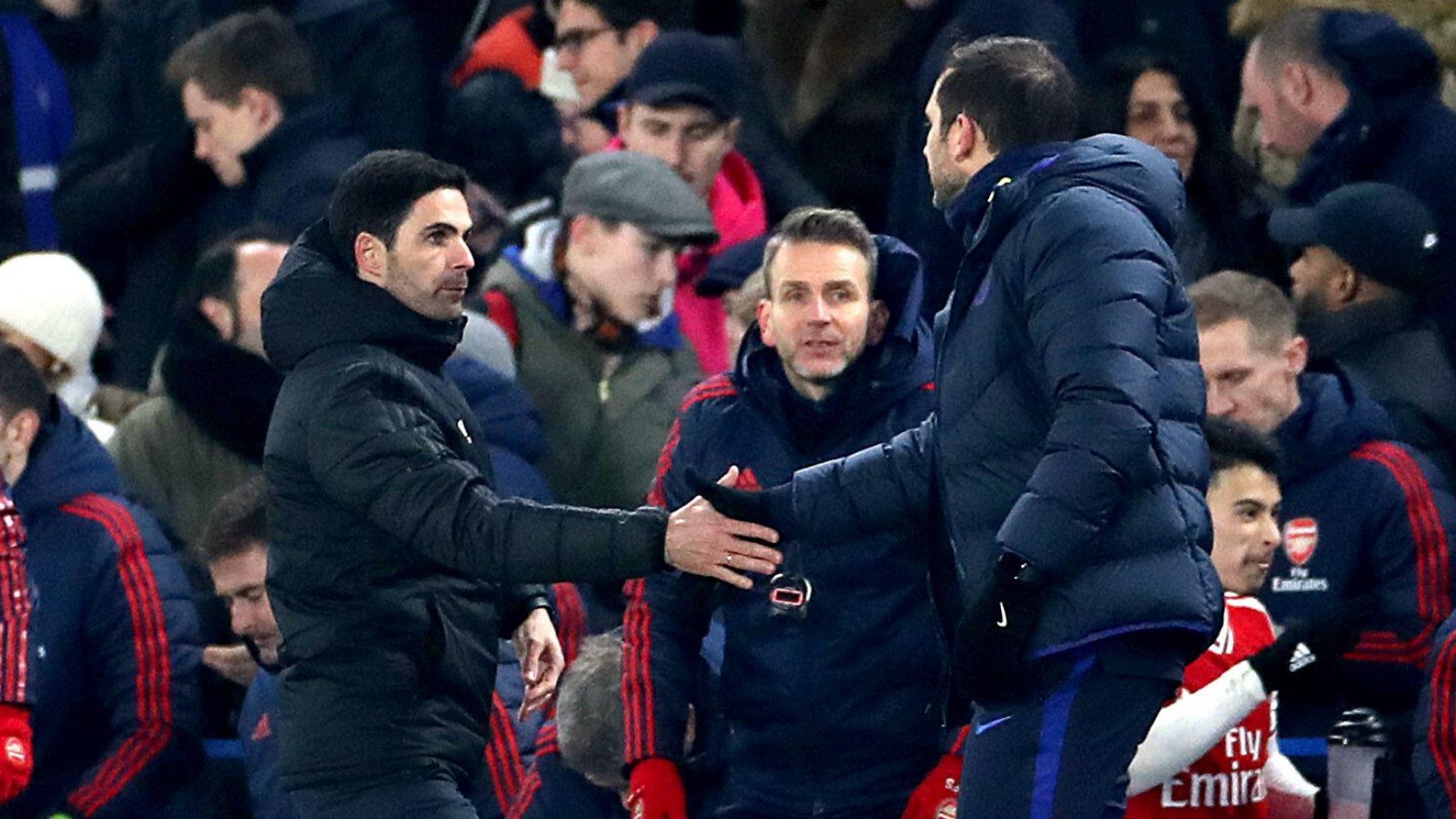 The Premier League is back baby and the optimism at Arsenal and Crystal Palace is not replicated for Frank Lampard or Manchester United.

Game to watch – Crystal Palace v Arsenal
For the third straight season, the Premier League returns with Arsenal making a short trip for a London derby in the first game.

The Gunners have run the gamut of opening fixture emotions over the past two campaigns, from thrashing Fulham 3-0 at Craven Cottage in 2020 to their humbling at Brentford a year later.

It is as easy to envisage them going top with an impressive win over Crystal Palace as it is to foresee them slumping to the bottom after another Patrick Vieira-administered humiliation on Friday evening.

It is rare that both teams go into the #CurtainRaiser in such high spirits but positive summers have given rise to optimism at the Emirates and Selhurst Park.

Only Barcelona and Bayern Munich have spent more money in this transfer window than Arsenal, who have adorned a promising if callow squad with seasoned title winners who have something to prove. Mikel Arteta must start to unequivocally deliver on his end of the bargain.

Crystal Palace have been predictably less extravagant in their spending but Cheick Doucoure and Chris Richards represent no small investments to a squad already exponentially improved by the presence of a fit and fresh Eberechi Eze.

Patrick Vieira laid some impressive foundations in his first season as manager and the pressure is on to perform under a far greater degree of expectation.

Those calls for him to replace Arteta as former Arsenal midfielder turned coaching disciple of Pep Guardiola reached fever pitch both when these sides drew in October and after Palace recorded a stunning 3-0 win in April. The Gunners have only actually won one of their last seven meetings with the Eagles and an extension of that underwhelming record would be catastrophic for the visitors, who would have preferred a fairly long list of alternative starters.

As it is, the table is set for our first main course and one of the more peculiar top-flight seasons will commence with a game between two of its most intriguing teams. That there has not been a draw in a single-game opening fixture since 2010 at least offers hope of something definitive.

Times change and even though both Premier League title favourites have signed expensive new centre-forwards, this remains Salah’s hunting ground.

Liverpool face a promoted side for the fourth year in a row, having put seven past Norwich in 2019 and 2021, with that 4-3 thriller against Leeds sandwiched in between. Salah has scored twice against Fulham before and will hope to continue in the same vein as a reminder to Erling Haaland, new teammate Darwin Nunez and any other pretender to his crown.

Manager to watch – Frank Lampard
The opening weekend is equivalent to a primary school show-and-tell lesson for the 20 Premier League managers, who provide a quick rundown as to what they did and where they went in the summer.

As ever, the class contains a few new students in place of those more unruly, disruptive ones who weren’t doing the work. Some presentations are far easier than others, while a select few – little Brendan – decide to embellish their last few months and make them sound far more exciting than the reality in the hope that nobody notices.

Then there’s young Frank, who struggles to hide his disappointment and frustration.

Everton have added three new players to a squad that scraped survival last season. One of those is loanee Ruben Vinagre, a player intended to increase squad depth at full-back. The two permanent signings were both from relegated Burnley.

With Richarlison headed the other way and Dominic Calvert-Lewin injured, there is an argument to suggest the team that finished 16th have actually been weakened. This despite Everton and Lampard still apparently having a certain pull with prospective new players: Vinagre chose them over Nottingham Forest and Wolves, while Amadou Onana prefers the move to Goodison Park over West Ham.

Nothing is imminent in terms of incomings and thus Lampard will have to make do with what he has. There is talk of deploying Dele Alli as a striker, thus further weakening a malnourished central midfield. Yerry Mina should be available to aid the defence.

But Lampard, still a relative unknown and erratic coaching commodity, has been significantly undermined by a dreadful summer.

Farhad Moshiri acknowledged in June that “mistakes have been made” and “lessons have been learnt”, but the extent of those appear to be not to spend any money. Valiant, admirable and even necessary to an obvious extent though that is, it feels as though Everton have not done enough.

The consolation is that opponents Chelsea have hardly had a stellar summer themselves, plus the Toffees beat them at Goodison in May. But Richarlison scored the only goal of that game and Thomas Tuchel, irritated though he might be, has at least been able to spend plenty of his new stepfather’s money on a few shiny gadgets. Lampard has little to bring in that the class did not see last season.

Team to watch – Manchester United
If Manchester United’s pre-season ended with their tour of the Far East and Australia, the mood at Old Trafford would have been much more palatable. There might even have been an element of excitement.

But those three wins and a draw secured playing better, more fluid and purposeful football seem like an age ago. Defeat to Atletico Madrid in Norway and a stalemate against Rayo Vallecano at home were essentially meaningless but the ongoing Frenkie de Jong saga and Cristiano Ronaldo’s increasingly disruptive gravitational pull have soured the air.

An injury to Anthony Martial is the inedible icing on a stale cake. The additions of left-back Tyrell Malacia, attacking midfielder Christian Eriksen and centre-half Lisandro Martinez were positive but hardly necessary in comparison to more pressing issues in central midfield and up front.

The stark contrast between their muddled planning and the sort of vision and clarity a team like Brighton possesses was laid bare in their last meeting. That 4-0 defeat in a lamentable season’s penultimate game was one of the single lowest points in the club’s modern era.

There should be few survivors from that embarrassment: Victor Lindelof, Alex Telles, Nemanja Matic, Anthony Elanga and Juan Mata either definitely or probably won’t feature. Martial’s injury could be the reprieve neither Manchester United nor Cristiano Ronaldo particularly want.

It will be an incredibly difficult game but the quickest way to gauge the impact of Erik ten Hag, to witness the fruits of his not inconsiderable summer labour. As low as the bar is, he and Manchester United have to clear it quickly and comfortably to prevent immediate questions.

EFL game to watch – West Brom v Watford
There were no real markers laid down on the opening Championship weekend. Only two clubs – Hull and Millwall – scored more than a single goal. Five draws mean wheat and chaff are yet to be separated.

The pre-season expectation was that West Brom and Watford would be found among the former but Steve Bruce’s Baggies could only salvage a draw against Middlesbrough and the Hornets beat Sheffield United for their first home win in 427 years with a goal on the hour mark.

Neither side particularly impressed against fellow promotion hopefuls. They get another chance on Monday evening.

European game to watch – Borussia Dortmund v Bayer Leverkusen
Dortmund won 4-3 at the BayArena and Leverkusen were 5-2 victors at the Westfalenstadion last season. More of the same would be nice.