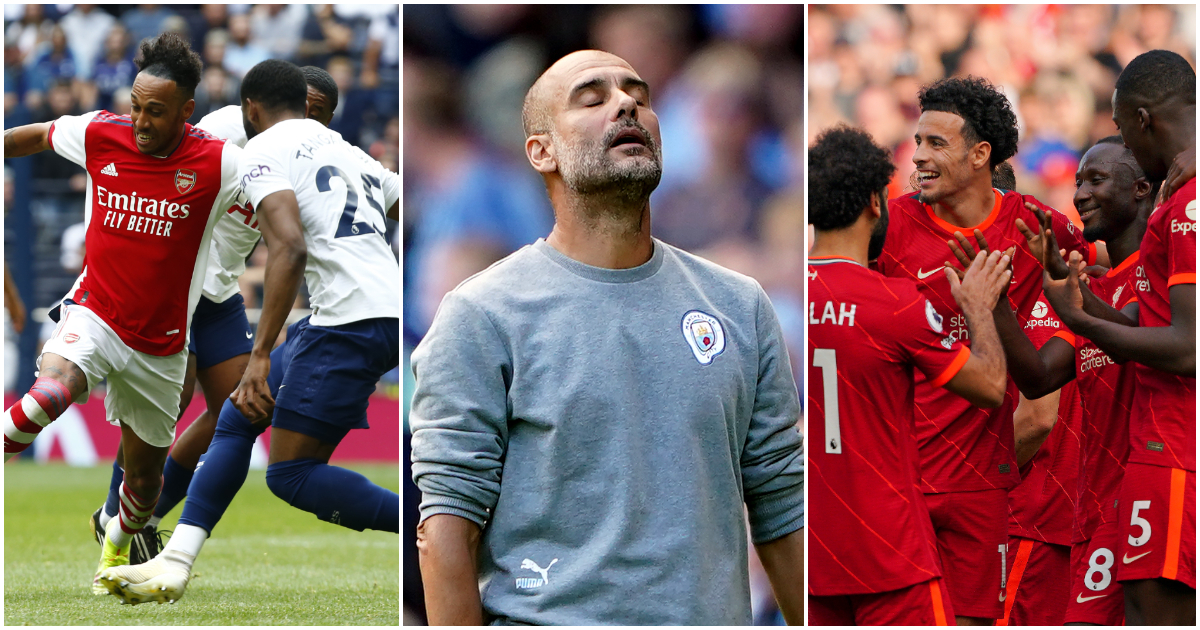 The north London Derby is worth a watch despite both teams being a bit rubbish – maybe because both teams are a bit rubbish. Elsewhere, another must-win game for plucky Liverpool, a tough test for Angry Pep and time for some tangible output from Adama Traore…

Game to watch – Arsenal v Tottenham
That first international break seems a long time ago now, doesn’t it? Back in those far-off, long forgotten days of earlier this month, Spurs were top and Arsenal were bottom. Nine points separated the two north London banterclubs after three games.

There’s no doubt this fixture carries some reduced status right now. The Big Six has passed away. RIP u will live on forever. Cant believe it. I wanna run to u. Really cant believe this. @. Neither of these teams are very good at the moment and both will hope they can lift their game for derby day. Arsenal have at least turned the results around, although they’ll know this should in theory be tougher than Norwich or Burnley, while Spurs will hope to take something from an enterprising if ultimately fruitless first 45 minutes against Chelsea and Carabao progress at Wolves.

Spurs are the more interesting team in many ways, because it is so unclear what they actually are or could be. Those three straight wins and clean sheets at the start of the season were born of extreme if arguably necessary negativity, but that tactic was exploded once and for all in a grim thrashing at Palace.

They have been more enterprising since, with Tanguy Ndombele reincorporated into proceedings with inevitable results: he’s made them better going forward but also makes so very many costly mistakes. He doesn’t need to be a defensive colossus – he will always have a Hojbjerg or a Skipp around – but he can’t just shirk duties as he does so often.

Our gut feel is that Nuno Espirito Santo will go safety first again here and hope for solidity and then something special from his attackers against a still fragile Arsenal side.

That might make for a dull afternoon, but derby games between deeply flawed sides can often be the most fun despite themselves. And this is a derby game between deeply flawed sides. Despite these two having scored five goals between them in the Premier League this season, it is precisely the sort of game that accidentally ends up 4-4. The formbook goes out of the window in a derby, after all.

We thoroughly recommend watching it to find out for yourselves, and apologies in advance for the inevitable turgid 0-0 that now follows.

Team to watch – Liverpool
Liverpool, the brave little team that could, take on the might of Brentford to try and keep their unlikely title dream alive.

Brentford have made a sparkling start to life in the Premier League, losing only to Liverpool’s fellow title hopefuls Brighton while seeing off Arsenal on the opening night and beating Wolves despite going down to ten men. This marks the start of a taxing run of games for the newbies, with West Ham, Chelsea and Leicester to follow before the potential relief of a Burnley, Norwich, Newcastle triptych.

But Liverpool have thus far been pretty ruthless this season in these kind of games. While the failure to break down the ten men of Chelsea at Anfield will niggle, their other four games have seen a minimum of fuss, with Norwich, Burnley, Leeds and Palace all failing to score while Liverpool themselves racked up 11 goals in four relatively facile victories.

Logic dictates something similar here, with Liverpool in the familiar position of knowing they cannot possibly drop any points at all in games like this in what already looks a teak-tough title race.

Player to watch – Adama Traore
Wolves score a startlingly low number of goals for the amount of chances they create, and on Sunday they face a Southampton side that has shut out West Ham and Manchester City in their last two Premier League games.

Only Liverpool and Manchester City have registered more than Wolves’ current 16.4 shots per game, and yet they are distinctly mid-table for shots on target (four per game) and nobody has scored fewer goals (two, the same as Arsenal and Norwich).

Pretty much all those numbers, for better or worse, have Adama Traore at their heart. He ranks 16th across the whole division for shots per game (2.8), tenth for key passes (2.4 per game) and is miles out on his own with a frankly absurd 9.8 dribbles per 90 minutes. Even allowing for a small early-season dataset that is an unfeasible number. For context, Allan Saint-Maximin is second on that list with 4.4 dribbles per game and nobody else has more than 3.2; Traore is dribbling more than twice as much as any other player in the division, and more than three times as often as all but one.

Manager to watch – Pep Guardiola
Been a busy time for Pep, hasn’t it? Started a war with his own fans for some reason, then once again got annoyed that the whole football pyramid can’t be run specifically for the benefit of his billionaire football club. In the middle of it all, City limped to a frankly pisspoor goalless home draw against Southampton and fell behind to Wycombe in the Carabao, a tournament City have annexed for the last four years.

Hopefully in between all the yelling at clouds, Guardiola has found some time to prepare his side for a nice straightforward Premier League fixture this weekend. They’ve got *checks notes* Chelsea away.

Football League game to watch – Reading v Middlesbrough
It’s still September and Reading are going to be the second Championship club hit with a significant points deduction. The good news for Reading fans is that in their case, while obviously still a massive blow, it does not necessarily equate to a season-long relegation battle no matter what the table might suggest in the short term.

European game to watch – Lazio v Roma
Maurizio Sarri v Jose Mourinho at the Stadio Olimpico. Of course you’re watching. Mourinho’s Roma are still in that phase a bit like his early days at Spurs when they’re still accidentally quite fun because he hasn’t quite got his claws into them yet. As at Spurs, ‘fun’ doesn’t necessarily equate to ‘good’, as shown by last weekend’s 3-2 defeat at Verona, but at least it means watching this game shouldn’t actively make you want to gouge your eyes out.