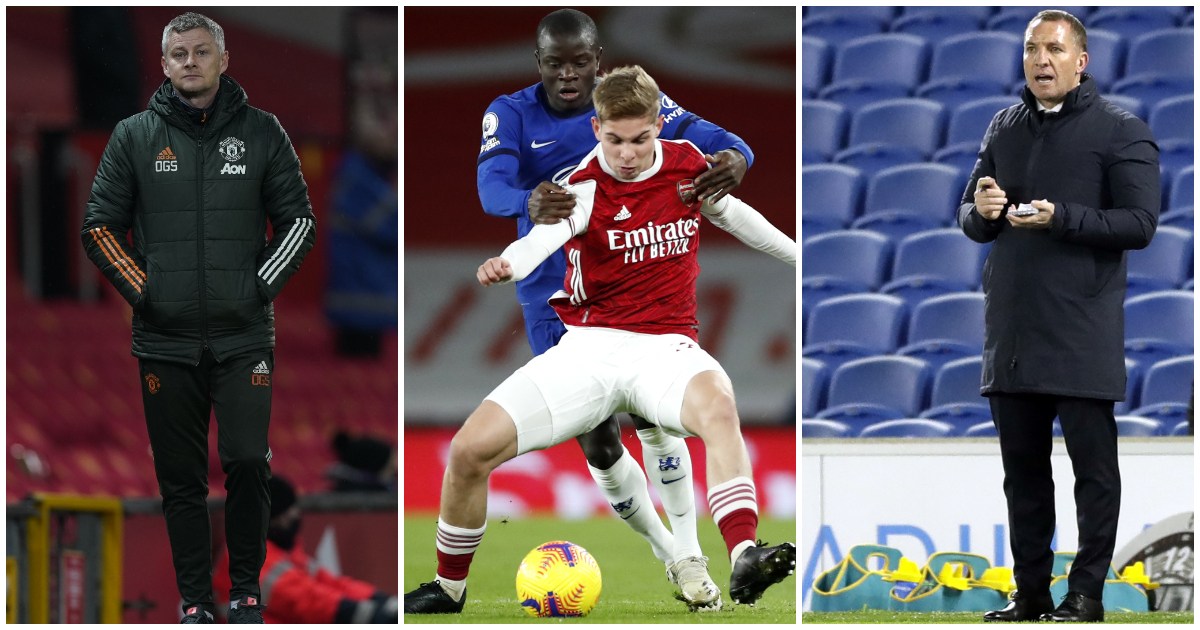 Man Utd play every other day this week – that’s the plan, at least. In between we get to see Arteta take on Tuchel…

Game to watch – Arsenal v Chelsea
When Thomas Tuchel was appointed, Chelsea were where Arsenal are now – ninth in the table and going nowhere fast. Three-and-a-half months later they are preparing for the Champions League final, FA Cup final and zeroing in on a top-four position, something which beating the Gunners would go a long way to sealing.

A Chelsea win and Liverpool defeat the following day would secure a route into the Champions League, even if they balls up the final against City at the end of the month. Tuchel’s impact has been nothing short of remarkable.

One of the biggest impacts the German has made is upon Chelsea’s record against their big six rivals, which Arsenal remain by way of stature rather than achievement. Under Lampard, Chelsea failed to beat any of their fellow snakes, drawing two and losing three matches, including one at Arsenal. Tuchel, though, has already beaten Pep Guardiola, Jurgen Klopp and Jose Mourinho in the Premier League, as well as Zinedine Zidane, Diego Simeone (twice), Carlo Ancelotti and Guardiola again.

So Mikel Arteta will hold no fear for Tuchel, despite his inevitable grace before kick-off at 8:15pm on Wednesday. Especially while the Gunners boss searches fruitlessly for a solution that doesn’t appear to exist at the Emirates right now.

Arteta’s backers claim few managers would thrive with this Arsenal squad. But the manager is hardly helping himself with his erratic selections and inconsistent approach. If there was an ideal replacement immediately to hand and, more importantly, the appetite among the Arsenal board to do, well, anything, then Arteta’s position would be under far greater threat.

The Arsenal boss will doubtless make a big deal of Arsenal’s win over Chelsea at the Emirates after Christmas, when the young Gunners offered some hope that it might actually be okay in the end. It was Emile Smith Rowe’s breakout night, but it took until the weekend for the Arsenal No.10 to bag his first Premier League goal.

Arteta highlighted that long wait while warning the youngster to increase his output but Smith Rowe will have to make the most of limited opportunities at Stamford Bridge. He will be boxed in by a miserly Chelsea defence and the rejuvenated pairing of N’Golo Kante and Jorginho.

Arteta may well surprise us – few expected them to turn over even Lampard’s Chelsea in December – but this game should be fascinating as an indication of how far the gap has grown between the London rivals in a few short months.

Liverpool next? Six of the best late Champions League charges

Team to watch – Manchester United
It’s certainly a busy midweek for United as they prepare for two home games against Leicester and Liverpool. Assuming both go ahead…

Few will have any sympathy for Ole Gunnar Solskjaer as he prepares for games two and three of a five-day triple header. But few could also criticise the Man Utd boss if he picks a team to face Leicester significantly weaker than an XI he might normally have chosen for what is a second-versus-fourth clash.

After going full pelt at Aston Villa 50 hours before, the Foxes are likely to face a United side featuring younger, fresher faces as Solskjaer prioritises the Liverpool visit. “Amad and Shola Shoretire are in contention, definitely,” as the manager hinted at a youthful side, while the likes of Axel Tuanzebe, Donny van de Beek and Juan Mata will provide plenty of freshness having seen very little action of late. How United’s second string fares against a Leicester side doing their best once more to sabotage their own ambitions should be fascinating.

But the most eye-catching of United’s three rapid assignments is the arrival of Liverpool, should the Reds be allowed to leave their hotel this time.

United, if they were so inclined, could screw their biggest rivals this week, if they allow Leicester to take points on Tuesday before the big guns return on Thursday to roll over Jurgen Klopp’s men. Liverpool will have taken plenty of encouragement from the win over Southampton, but theirs remains a fragile confidence, which a full-strength United could exploit.

If the Red Devils are allowed to play, that is. The last meeting was postponed after the demonstrations against the Glazers’ ownership of the club and a repeat of those protests has been mooted. United have done their best to fortify Old Trafford but the club will have to do more than simply pull up the drawbridge.

Whether it’s on or off, get the popcorn in for Thursday night.

Welcome to Manchester, this club as never been as disengaged from its supporters pic.twitter.com/HtF2xYF5hT

We are entering hoodoo territory for Leicester and Rodgers

Manager to watch – Brendan Rodgers
No manager has more on the line in the coming fortnight than Brendan. He could make the Foxes’ dreams come true with a top-four finish while becoming the first manager to bring the FA Cup back to Leicester. One out of two would rank as a successful season. Fifth and a final could still be classified as small progress, but in the context of Leicester’s season, it would be a huge anti-climax.

Rodgers’ side have spent 2021 in the Champions League berths, for the most part snug in third place while eyeing up the honour of being the best of the rest after Manchester City. Now, though, they have slid to fourth and backsides are nipping that Liverpool could yet plunder something from their miserable season.

Before the FA Cup final on Saturday, Rodgers will have a far clearer idea of which way the season is heading. Leicester travel to Manchester United on Tuesday, two days before Liverpool make the same trip. United could do them a massive favour or, once again, screw them down the final stretch.

We don’t know what teams Solskjaer will pick for either of their matches this midweek. United could rest some key players for Liverpool on Thursday. If so, Rodgers and Leicester must seize on their opportunity.

Rodgers has selection issues of his own to worry about. Leicester could be missing ‘the brain of their defensive line’ if Jonny Evans cannot be patched up before the trip to Old Trafford. Should Evans miss out once more, then to shackle whichever of Bruno Fernandes, Marcus Rashford, Mason Greenwood and Edinson Cavani they might face, Rodgers has to prompt an immediate and dramatic improvement along a backline mercilessly ripped apart by Newcastle.

Player to watch –  Ross Barkley
The only guarantee when it comes to Barkley is the ex-Everton midfielder will always raise his game when facing Everton.

After a promising start at Aston Villa, Barkley struggled to maintain that momentum – a hamstring problem certainly did him no favours –  and he found himself on Dean Smith’s bench for eight games having had a hand in only one goal since returning from injury in January.

But back at Goodison Park a week and a half ago, Barkley teased the Villa fans with another glimpse of what he is capable of. Coming in for his second start since February 21, he produced a vastly improved performance evidently motivated by facing his former side, if the increased intensity in his game was any indicator.

After another subdued showing against Manchester United on Sunday, Barkley does battle again with the Toffees on Thursday in the early-evening kick-off. Against his old club while he looks to attract a new one for next season, expect Barkley to be busy.

European game to watch – Atletico Madrid v Real Sociedad
Atletico have reclaimed the ascendancy in the La Liga title race. Having initially passed it to Real after a goalless draw with Barcelona on Saturday, Zinedine Zidane’s men proceeded to pass it straight back by drawing at home to Sevilla.

With three games to go, Atletico have a two-point cushion over both Real and Barca, though Barca could reclaim top spot if they beat Levante on Wednesday. Real wrap up the midweek action on Thursday at Granada.

Atletico’s task this week looks tougher on paper than their rivals’ but fifth-placed La Real haven’t yet beaten any of the four teams above them this season. Having f***ed it once already this season, Diego Simeone’s men surely cannot blow it again.