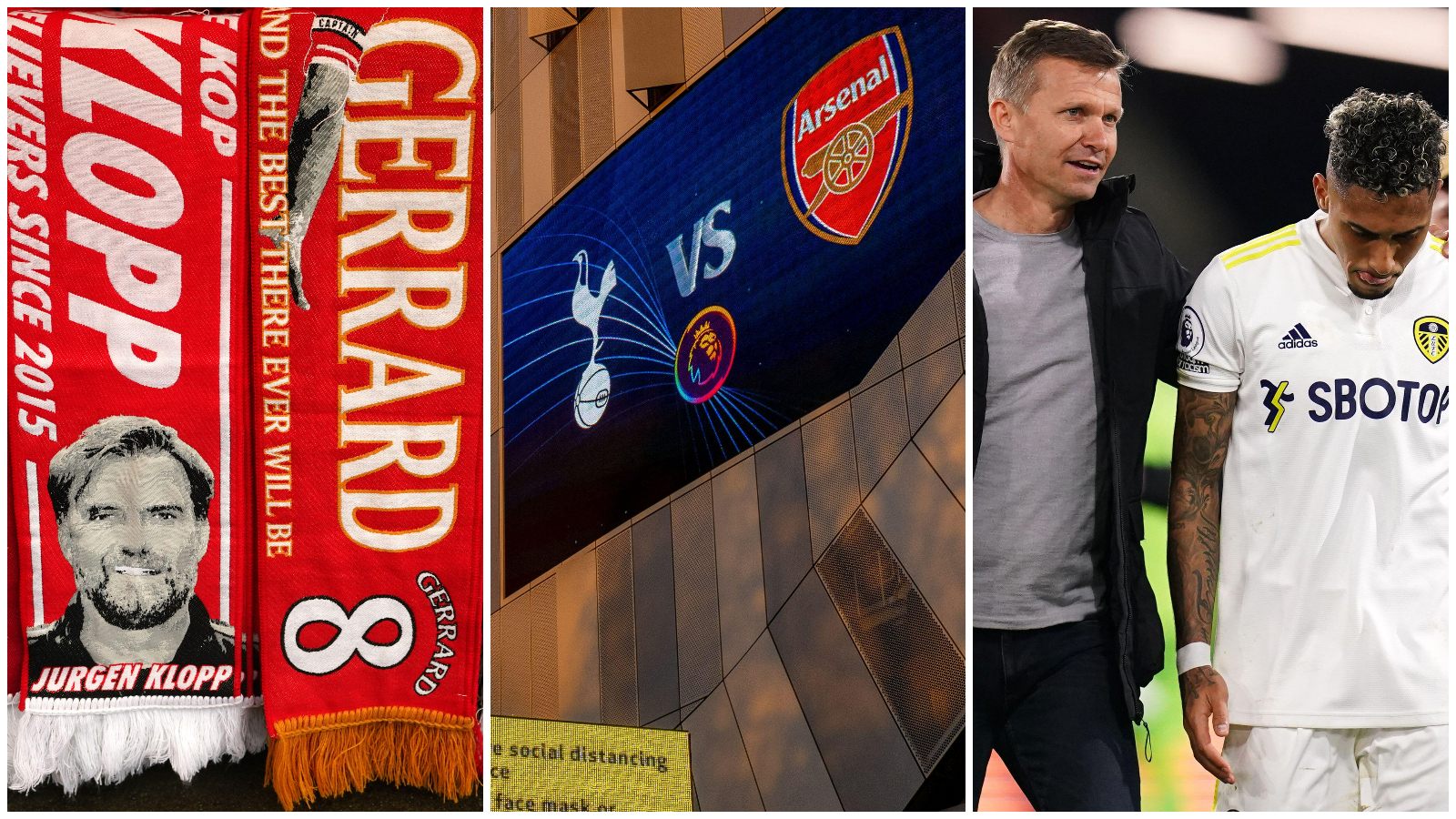 It’s the biggest north London derby in years and must-not-lose for Spurs. Same for Liverpool against Steven Gerrard’s Villa, while Leeds have to regroup for Chelsea…

Game to watch – Tottenham v Arsenal
A creditable point though it was at Anfield on Saturday night, Spurs still lost ground in the race for fourth, presenting Arsenal with the opportunity to confirm their place in next season’s Champions League and celebrate St Totteringham’s Day at the Tottenham Hotspur Stadium on Thursday night.

Which makes this north London derby one of the biggest for years and a must-win for Antonio Conte. Even if they claim all three points, it might not be enough, with Arsenal taking a four-point cushion up the road.

The stakes make for a fascinating clash as does the unpredictability of this controversially delayed derby. It needs no more needle but the manner in which Arsenal backed out – and were allowed to back out by the Premier League – in January left a bitter taste at Tottenham. In addition to the usual spice, there will doubtless be a bit extra from the hosts.

Anyone who claims they could call it now is lying. Both sides have showcased their vast qualities and unshakeable flaws in recent weeks while the ascendancy in the battle for fourth has been tossed around like a pinless grenade. Both sides of each team were on show just at the weekend, when Spurs left Anfield disappointed not to have beaten Liverpool, while Arsenal played Leeds off the park in the first half on Sunday before making life considerably harder than it needed to be in the second.

To get a positive result – a draw will do – Arsenal cannot show the kind of jitters to which they have been prone as the finish line has crept into sight. For the sake of everyone without a dog in the fight just hoping for a Thursday night thriller, the hope is they don’t. If we get the best of both Spurs and Arsenal while they scramble for the last seat at the Champions League table, we are in for an absolute treat.

Jesse Marsch’s side did pretty much everything the American boss will have told them not to before taking the field at the Emirates. No sloppy mistakes. Oh. Keep your heads. For f**k’s sake. For a team fighting to survive facing one chasing their own definition of success, it was a catastrophic performance, with their captain starring in the sh*tshow.

Jamie Carragher called Luke Ayling an ‘idiot’ for his two-footed lunge on Gabriel Martinelli, which was more complimentary than the Leeds skipper deserved.  Marsch was already missing half of his defence, with Stuart Dallas out long-term and Liam Cooper not fit enough to feature at the Emirates. For Ayling to end his own season like that, at a time when damage limitation was their main aim, was an act of lunacy, not of a leader.

The fact that Leeds didn’t cave in completely, as they seemed destined to, offers some encouragement for Marsch, who has had to dig deep in the last week or so for reasons to be cheerful even with his seemingly endless supplies of optimism. That Leeds remained in the game until the last kick says plenty about both them and Arsenal.

Many Leeds fans didn’t expect much at Arsenal, and what they got was better than they feared at half-time. The view in West Yorkshire seems to be that the final two games, against Brighton and Brentford, will decide their destiny. But as they sit on the wrong side of the relegation line with three to play, Wednesday night’s visit of Chelsea can’t simply be written off.

And Leeds should have little to fear from what Chelsea have offered of late. With third place seemingly secured, the Blues have eased up in recent weeks, winning only one of their last five – that was a last-gasp victory over a depleted, 10-man West Ham – and just when things were looking up as they led 2-0 against Wolves on Saturday, they shot themselves in both feet.

There is certainly a vulnerability in Chelsea at present that Leeds can target at Elland Road. Providing they don’t sh*t their own beds again.

Manager to watch – Steven Gerrard
Much as Gerrard might like to roll over for Liverpool on Tuesday night, the Aston Villa boss has own ends to meet.

Gerrard welcomes his former side to Villa Park on Tuesday night, with Liverpool in no position to squander any more points while they hope catastrophe befalls Manchester City. If Jurgen Klopp’s side fail to beat the Villans, City can be crowned champions next weekend.

Doubtless Gerrard is still rooting for the Reds but their ex-captain will have to reluctantly put aside his allegiance to Liverpool while Villa chase their best Premier League finish in over a decade.

Not since 2011-11 have Villa finished in the top half of the Premier League, under ex-Liverpool manager Gerard Houllier. Villa currently lurk in 11th place in a group of five teams within two points of each other, but Gerrard’s side have at least one game in hand on all of them.

But two of their remaining games come against the top two. The visit of Liverpool comes before a trip to City to close the season, with games against Palace and relegation-threatened Burnley sandwiched between. So Villa’s defensive improvement comes at a good time for them, if not Liverpool.

It has been a wildly inconsistent start to Gerrard’s reign at Villa Park but a top-half finish would be a tangible achievement to take into his first summer in charge, despite the cost to his boyhood club.

Player to watch – Fernandinho
If Liverpool fans are searching for signs of City caving now, they might be encouraged to see that Pep Guardiola is currently down to ‘three defenders for three games’, the first of which is a trip to Wolves on Wednesday night.

Kyle Walker and John Stones’ seasons were over prior to the win over Newcastle on Sunday, when Ruben Dias felt his hamstring twang. The Portugal centre-back will join Walker and Stones on the sidelines for the rest of the campaign.

With Nathan Ake also struggling with an ankle injury and almost certain to miss the trip to Molineux, Guardiola is once again left to rely on the experience and adaptability of Fernandinho as the Brazilian goes into the final three games of his City career.

The veteran was chosen to replace Dias at half-time on Sunday, despite Ake being on the bench alongside young defenders Luke Mbete and CJ Egan-Riley, who made a late cameo to spare Aymeric Laporte the last few minutes.

So it will almost certainly be Laporte and Fernandinho at the heart of Guardiola’s defence when they go Molineux. The Brazilian hasn’t started at centre-back since September 2020 and despite going two months without making a Premier League appearance before being rotated in for the 5-1 win over Watford, the midfielder has been thrust into the spotlight as a makeshift defender.

Could Wolves target the 37-year-old? His presence rather than any of City’s specialists might encourage Raul Jimenez to pull his finger out after a run of form that saw him benched for Fabio Silva. And City have hardly been unflappable at the back of late, even when Guardiola wasn’t down to the bare bones.

European game to watch – Juventus v Inter Milan
The Coppa Italia final has thrown up another Derby d’Italia, not long after the madness of the last one…

For the Italian giants, this could be the only pot between them this season. Inter are still battling for the Serie A title but they trail Milan by two points with two games remaining after chucking away their game in hand. Juve have achieved their minimum aim for the season – Champions League qualification – and the Coppa Italia would add a flourish to a difficult campaign of transition for the Old Lady.

So Inter go to Rome as favourites. They have won two of their three meetings with Juve this season but all three encounters have been tight and tense. This one is sure to be no different.