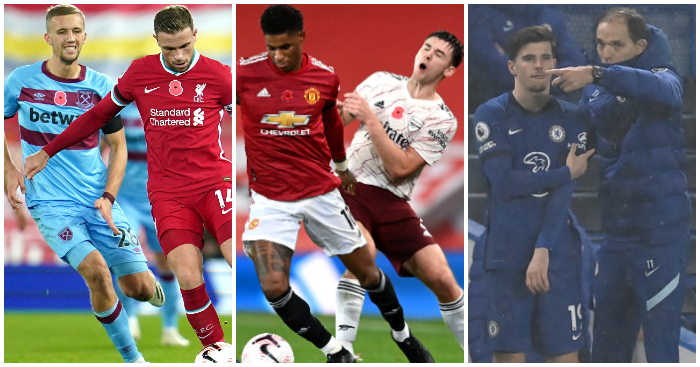 Game to watch – Arsenal v Manchester United
Are United sh*t again? This weekend might give us a good steer…

Ole Gunnar Solskjaer’s side began the week as Premier League leaders but might end it in fourth should their recent record at the Emirates continue. Their 13-game unbeaten run in the Premier League came crashing down after being tripped up by Sheffield United at Old Trafford on Wednesday, the manner of which has led many to again question their title credentials.

So United, as always, have plenty to prove when they go to north London on Saturday evening. For Solskjaer and his men it is an opportunity to highlight some evolution in their development and their powers of recovery. United’s performances are so often tied to their mood, which this week took an unexpectedly dark turn. Solskjaer must ensure his team reacts to the Blades defeat as they did to their last meeting with Arsenal – a 1-0 victory for the Gunners at Old Trafford which prompted United’s surge to the summit – rather than the one in 2019, his first as manager which preceded a wretched run of two wins in nine games to close out the 2018/19 season.

Arsenal are good again. And they have shown their resilience already this week. Their jolt came at Southampton in the FA Cup last week but they returned to St Mary’s three days later to avenge that defeat with a 3-1 come-from-behind victory over Saints.

The signing of Martin Odegaard should help to maintain the current positivity at the Emirates. The Gunners have already addressed the two main weaknesses in their squad – midfield creativity and competent back-up for Bernd Leno – and the first sight of Odegaard will be an intriguing one, even if it is as a substitute.

Arteta’s only concern right now is for the fitness of some of his key players. Kieran Tierney has missed the last two matches, while Thomas Partey – so impressive against United at Old Trafford – and Emile Smith Rowe were both forced off at St Mary’s in midweek.

Solskjaer isn’t sweating the small stuff either. “No big inquest,” he said after United soiled themselves in midweek. Hopefully both managers take their breeziness into battle on Saturday and allow the necessary freedom for a thriller.

Manager to watch – Thomas Tuchel
“There is no room for disappointment, no room for doubts,” Tuchel said after watching his new Chelsea side pass Wolves to death on Wednesday without ever putting them – and the watching neutrals – out of their misery. His second game will be much like his first, with Sean Dyche in Nuno’s role when Burnley head to the Bridge on Sunday lunchtime.

Chelsea put on 887 passes for their new manager while claiming 79 per cent of the possession in Tuchel’s first match in charge since taking over from Frank Lampard. The German’s impact was evident, not only from the team sheet, but from Chelsea’s performance after just a single training session under their latest boss.

So it will be intriguing to see what he can make of three days on the training pitch before the buoyant Clarets arrive to rain on his passing parade, and how he reacts to that opening display. “I was very happy with the performance,” he insisted but privately he must recognise the Blues’ attacking shortcomings.

Having opted for experience in his first team selection, the effect of Mason Mount on Wednesday must earn the midfielder a recall, or else Dyche and his Clarets will be delighted to sit back and watch Jorginho and Mateo Kovacic move the ball from side to side, clocking up the passes while the scoreboard remains blank.

For Chelsea fans, the midweek display was distinguishable from whatever it was Lampard was serving up yet unnervingly similar to Sarri-ball. Only the implementation of some penetration will allay those niggling early concerns. This won’t have helped…

Team to watch – West Brom
“It appears we have a problem here at The Hawthorns,” said the newly-crowned king of the understatement Sam Allardyce after an “upsetting” performance from West Brom in their 5-0 defeat to Manchester City.

There is little shame in being humped by City but barrel loads of it in conceding 22 goals in five home games. Has Big Sam finally found a team he can’t tighten?

If not, the manager needs to hope his particular brand of magic rubs off on his beleaguered Baggies before Saturday afternoon when Fulham turn up for their go at the throstle shoot in the season’s first relegation six-pointer.

The second could come three days later when Big Sam takes his Baggies to Sheffield United. Both are must-win for Albion, even if Allardyce on Tuesday seemed bereft of ideas for how to achieve them.

Player to watch – Tomas Soucek
Seeing as most of Liverpool’s midfield are either injured or splitting shifts in the centre of their defence, this isn’t a great time for the Reds to be taking on one of the Premier League best double acts: Soucek and Declan Rice.

Soucek has been outstanding for the Hammers in their impressive season so far. The Czech midfielder has scored 10 goals since arriving in January, the same number as Anthony Martial, Raul Jimenez and Olivier Giroud. If you subtract penalties from Jamie Vardy and Bruno Fernandes’ numbers, Soucek is keeping pace with them too.

In an era when midfielders must be seen to specialise, it is refreshing to see Soucek thundering from box to box, combining the roles of numbers 6, 8 and 10. The 25-year-old and his partnership with Rice has been a huge factor in West Ham’s record-breaking start to the year in which they have won all six of their matches for the first time ever.

This, though, will be the first time since New Year’s Day that David Moyes’ side have faced an opponent currently above 14th place in the Premier League. But thanks to Soucek’s form and Michail Antonio’s currently intact hamstrings, the Hammers will rarely have felt better about their prospects of beating Liverpool for the first time since January 2016.

Tomáš Souček is the only player in the Premier League this season to win 100+ aerial duels.

And most of them are in the opposition box. 🗼 pic.twitter.com/8mggrQfCWY

Football League game to watch – Norwich v Middlesbrough
Before their closest rivals kick off this weekend, leaders Norwich can go nine points clear at the top of the Championship on Saturday lunchtime when they welcome a Boro side on the fringes of the play-offs but reeling from a 3-0 home defeat to Rotherham in midweek.

Neil Warnock took it surprisingly well: “The lads have done ever so well so I don’t want to knock them. I can’t fault the effort. I thought we had the better chances but just never looked like scoring.”

Warnock has immediately set about remedying that with the signing of Yannick Bolasie, who is expected to play a part against the Canaries.

You can get your Championship kicks on Friday night, too, when fifth-placed Reading host sixth-placed Bournemouth, with Jack Wilshere back in gainful employment, while Saturday evening sees Stoke travel to Huddersfield.

European game to watch – RB Leipzig v Bayer Leverkusen
Between them, Leipzig and Leverkusen have won three of their last 12 games. Yet still this is a second-versus-third clash on Saturday evening.

No-one at the top of the Bundesliga has covered themselves in glory of late, with Bayern Munich’s recent mis-steps going unpunished. Indeed, the champions could go 10 points clear this weekend if Leverkusen triumph at Red Bull Arena. Not that either side is fretting over the leaders.

“I could not care less about Bayern,” said Leverkusen keeper Lukas Hradecky after their defeat to Wolfsburg, while Julian Nagelsmann admitted that the Bavarians are likely out of reach: “Bayern are in an express train and we are in a regional train. Few regional trains can overtake an express train.”

But any train can de-rail. And Leipzig need to get their season back on track regardless of Bayern’s destination.