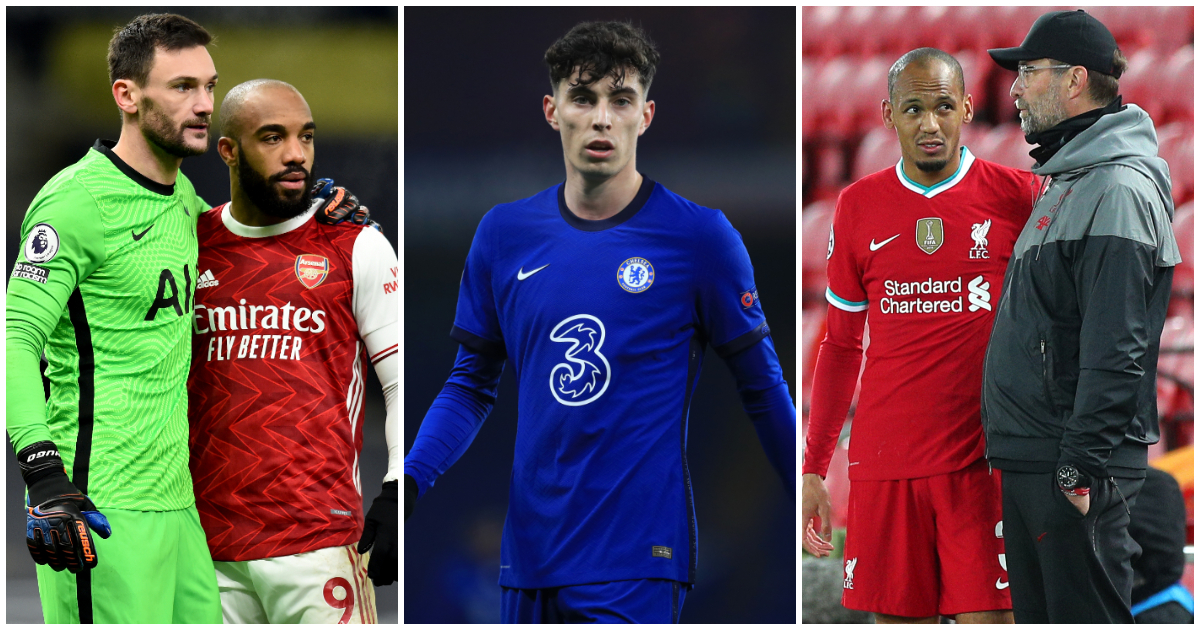 Game to watch – Arsenal v Tottenham
For Arsenal, it’s a Big Weekend in the midst of a “massive week” which Mikel Arteta hopes will see the Gunners “go bang”.

Arteta was referencing Arsenal’s longer term prospects but three wins from their Europa League ties with Olympiacos and the visit of Tottenham on Sunday would certainly light a spark. A 3-1 win in Greece on Thursday got the Gunners off to a good start and though the Europa League has become their priority for the coming weeks, the north London derby can never be seen as just a distraction from their primary target.

Arsenal currently occupy a Premier League no-man’s land – 10th position, a dozen points below the top four and the same above the bottom three. Even a Europa League place appears a stretch for the inconsistent Gunners, but come Sunday, the only thing that matters is wiping the smug grin off Jose Mourinho’s face.

To achieve that, Arteta will have to find a way in two days to get his players to cut out the daft mistakes that have cost them too many goals of late. Arsenal are yet to properly balance the risk and reward of playing out from the back, which has seen them drop points at Burnley and briefly surrender a lead in Greece this week.

And Harry Kane hardly needs that kind of help. The Spurs striker netted his 25th and 26th goals of the season while they too put one foot in the Europa League quarter-finals, and though Kane picked up a knock in the win over Dinamo Zagreb, the “incredible” striker will be fit and ready to pick off whichever Arsenal player is due a brain fart this weekend.

Kane’s brace made it five wins on the spin for Spurs, equalling their best run under Mourinho. But that streak will count for nothing in supporters’ eyes if a derby double isn’t forthcoming on Sunday.

Team to watch – Liverpool
Who knew that playing centre-backs in central defence and world-class midfielders in midfield might be a good idea?

Jurgen Klopp was finally able to apply such revolutionary thinking on Wednesday night when Liverpool turned in their best performance of the year to see off RB Leipzig in the Champions League.

Some symptoms of their recent ills persisted, with the Reds wasting a succession of chances before Mo Salah and Sadio Mane eventually killed off Julian Nagelsmann’s men. But the fact they could afford such profligacy was itself a step in the right direction while Nat Phillips and Ozan Kabak remained secure at the back, especially with Fabinho patrolling the midfield in front of them.

The Champions League has so often provided solace for Liverpool and now comes the job of stringing together consecutive wins and building momentum when they head to Wolves in the Premier League on Monday night.

Away from Anfield, with maximum time to recover from their ‘home’ game in Budapest – the Reds have no excuse for once again veering back to their dire form of late.

As much as Klopp doesn’t rate Phillips on the ball, evidently the lad can defend and if his continued presence frees up Fabinho to firm up the midfield alongside Thiago, then for the first time in a long time, it means that the Reds are not broken, and Klopp need not fix anything.

Player to watch – Kai Havertz
What better way to start your Saturday on the sofa – where else have you got to go? – than watching Leeds and Chelsea high-press the living sh*t out of each other?

Before the trip to Elland Road, Thomas Tuchel can reflect on having got a lot done in a relatively short period of time as Chelsea coach, even if for his bosses, 11 games represents an age. The German, in taking 21 points from 27, has nailed down a system and style of play while shoring up the Blues’ backline. Now his attention has turned to his forwards.

Tuchel’s biggest job: getting something like the best out of Havertz. And the coach has already got to work if we read into the performance against Everton on Monday, when the Blues recorded their highest xG total (2.34) of Tuchel’s reign so far, and overall since Boxing Day.

Havertz was given his first Premier League start since Tuchel’s first match in charge and only the second opportunity to impress in the role which he impressed Chelsea enough for them to fork out £72million last summer.

Everton never got to grips with Havertz while he played as a false 9, occupying the spaces in front of their three centre-backs. Olivier Giroud and Tammy Abraham have been tasked with playing somewhat deeper to bring others in to play, and though Giroud has given a decent account of himself, we can only assume Tuchel isn’t much impressed by Abraham’s efforts.

Tuchel has rotated heavily so far but Havertz hardly needs a break. Just the opposite. He now has an opportunity to put together a run of appearances and, consequently, form. Bielsa beware.

Manager to watch – David Moyes
Whether he would ever admit to it, Moyes will always have something to prove when he returns to Old Trafford. Since his West Ham team are currently higher in the table than his Man Utd team ever were after the first week of his only season in charge, never has he been able to hold his head quite so high when facing his former side.

Of course, Moyes has already taken West Ham to Old Trafford this season, in the FA Cup. Those who witnessed the fifth-round tie will have already expunged 120 turgid minutes from their memory, after the Hammers played for penalties, which they almost achieved before being denied by Scott McTominay’s extra-time volley.

Please God, for the sake of all of us who plan to conclude our weekends with this second-versus-fifth clash, grant Moyes the confidence and guts to make this the game it could be. West Ham will be without Jesse Lingard, ineligible to face his parent club, but given the Hammers’ recent form and fortunes, the visitors are entitled to go to Manchester with bigger ambitions than simply preserving a clean sheet.

On Saturday, 2019 winners Pompey face Salford in the 2020 final, with the victors set to enjoy a whole 24 hours as holders.

Because the 2021 final takes place on Sunday afternoon, with Sunderland – beaten by Pompey on penalties after a thriller in front of 85,000 in the previous showpiece – taking on Tranmere.

Pompey are on the slide – they lost at home on Tuesday to Sunderland, who are flying as they look to end a 48-year Wembley hoodoo – while Salford are driving Gary Neville slowly mad with one win in six, falling away from the pack at the top of League Two, where Tranmere have positioned themselves perfectly for an assault on the top two.

European game to watch – AC Milan v Napoli
Presumably European leagues got wind of the pizza party at Wembley this weekend and took the view that there’s no point competing, since there’s little to really grab you by the balls in the fixture lists across the continent this weekend.

RB Leipzig v Eintracht Frankfurt – second hosting fourth in the Bundesliga – could be a doozy on Sunday afternoon but the standout game in Europe takes place in Milan, where the Rossoneri host Napoli.

Milan have dropped six points off Inter’s pace at the top of Serie A and their Sunday evening clash with top-four chasing Napoli, led by former Rossonero Gennaro Gattuso, takes place after Inter go to second-from-bottom Torino. The leaders haven’t had any European distractions this week; Milan must maintain their chase in between clashes with Manchester United.