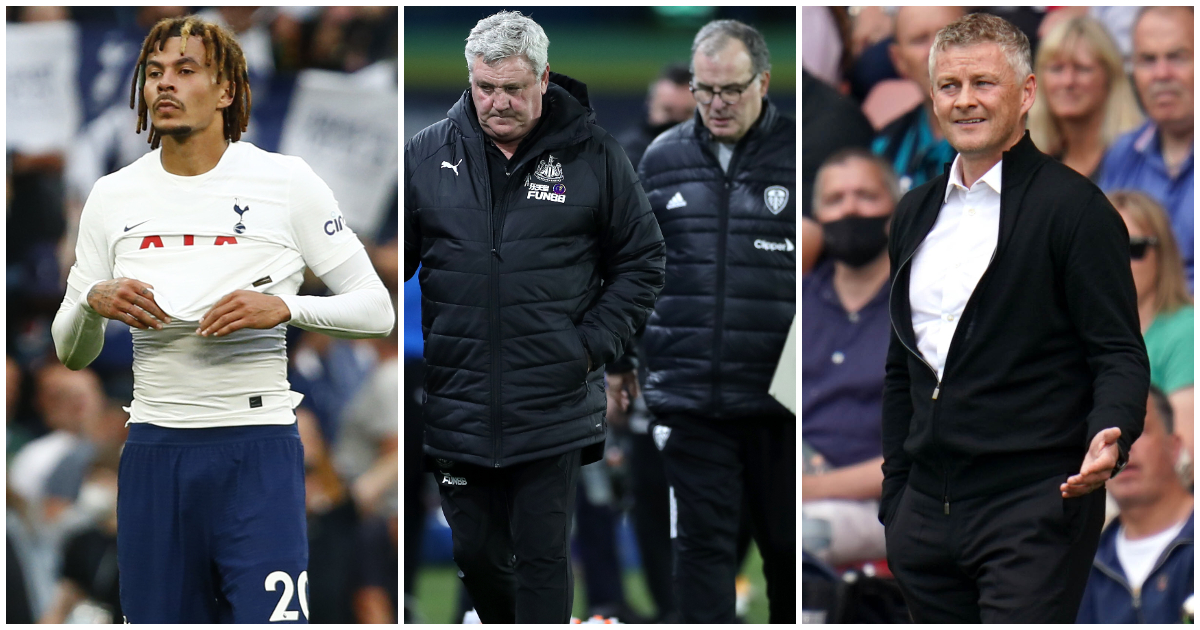 A first win is at stake for Newcastle and Leeds on Friday night. Then Man Utd and Dele Alli both need vast improvements…

Game to watch – Newcastle v Leeds
Two of the five Premier League clubs winless after four games meet at St James’ Park. But the zero in the W column is one of the few things Newcastle and Leeds have in common right now.

For the visitors, there is little panic. Concern, yes; fear, no. Marcelo Bielsa remains the Lord and saviour in West Yorkshire and despite the Whites being gubbed by Manchester United and Liverpool, worries over a dose of second season syndrome are being held at bay. For now.

Being turned over at Newcastle might accelerate the onset of symptoms. As well as coming to terms with his side’s shortcomings against United and Liverpool, Bielsa must also cope with the prospect of having one senior centre-half available, with Liam Cooper the only man standing, and he’s still recovering from twisted blood having spent last Sunday chasing Sadio Mane.

Fortunately for Cooper and Bielsa, Callum Wilson is missing for Newcastle. Just one of the many problems facing Steve Bruce as he prepares to welcome a side who took six points from the Magpies last season.

In stark contrast to the unity and love for Bielsa, and the buzz that remains among Leeds fans, Bruce is struggling to find anyone on Tyneside beyond his family who might give him the time of day. Newcastle fans have long since had enough, with their mood a toxic mix of resignation and mutiny.

Bruce knows it too, because Newcastle fans spelled it out for him at their last home game against Southampton. Since then, he’s been contradicted by the club over their transfer policy and taken it out on the media. Bruce carries the air of a man desperate for the sweet release of the sack, but Newcastle won’t even give him that.

Despite Leeds’ wretched start to the season, it would come as no surprise if they suddenly score five on Friday night. Which almost certainly won’t change a thing at Newcastle.

After sticking six past RB Leipzig on Wednesday night, the City boss pleaded for people to take in the champions against Southampton on Saturday.

“I would say the last three games we played here we scored 16 goals. So I would like to come more people next game on Saturday, we need the people next Saturday. Please.”

Desperate doesn’t look good on Pep. But more than that it’s a bad time to be digging out City’s support, with a pandemic still raging while some fans face the choice of a match ticket or making sure they can put food on the table the following week.

It is an issue City have faced throughout their period of sustained success, and the club have taken some creative measures to put arses on blue seats in the past. Some of which have drawn ridicule from rival supporters.

Especially now, it’s the sh*ttiest of sticks to beat City fans with. They, like fans at United, Liverpool and numerous other Premier League clubs, have had a less-than-satisfactory experience as clubs implement new ticketing measures, and in the current climate, the last thing they needed was their manager inviting more derision.

Someone will most likely have a word in Pep’s ear, so we can probably expect a climbdown of sorts on Friday, or a gushing tribute to those who accept his invitation on Saturday afternoon.

Team to watch – Manchester United
Only a victory at West Ham will prompt an adjournment to the inquest over United’s dismal start to their Champions League campaign. Anything else, and Ole Gunnar Solskjaer would be best advised to duck for cover like a Young Boys steward.

The United boss and his players have been getting pelters since losing in Switzerland. Not so much for the defeat; more for the manner of it.

Solskjaer got it wrong, and so did many of his stars. The manager’s decisions backfired and Solskjaer has to answer to the same old questions once more.

In the manager’s defence, he has been hung out to dry by some of his players. Aaron Wan-Bissaka’s daft red card saw the momentum lurch in the hosts’ favour, while a draw would have kept the critics at bay somewhat had Jesse Lingard not teed up Jordan Siebatcheu in the dying seconds.

But Solskjaer committed plenty of errors of his own. With a slender lead to protect, the United boss simply threw on defenders, which only served to create more confusion and chaos rather than security. His changes resulted in Lingard being at the base of midfield, from where he made his costly mistake.

It was all so…odd. Have United not trained and prepared for the prospect of playing a man light? Apparently not.

How will Solskjaer react? Probably by hoping his forward players can dig him out of his latest hole. Though it seems certain that the United boss will also return to two holding midfielders at West Ham. Being brave was all well and good amid the Ronaldo euphoria against a dire Newcastle side, but even they picked holes though United’s midfield.

Back to the bench you go, Donny. Fred and Matic have got this…

Player to watch – Dele Alli
“It is a big concern… much improvement is required,” said Nuno after seeing his side pulled apart by Crystal Palace. The Tottenham boss could have been addressing almost any aspect of their performance, but the matter at hand was Spurs’ abject lack of creativity.

With Son-heung Min missing through injury, as he is expected to be against Chelsea on Sunday, that burden falls heavily on Dele Alli. One he is struggling to carry.

Without Son, Harry Kane managed not a shot or even a single touch in the Palace box last weekend. As a central midfielder, Alli was evidently too busy fighting fires in the engine room to supply Kane.

But Alli’s lack of creativity in this role is not a problem limited to Selhurst Park. He earned and scored a penalty in the win at Wolves, but so far this season, the 25-year-old is yet to create a chance or offer a key pass.

Alli tends to relish facing Chelsea – he has had a hand in eight goals in nine appearances against the Blues. But this is a different Chelsea and and a different player. A return to something resembling the Alli form of old would go a long way to helping Spurs beat Chelsea in the Premier League for the first time in almost three years.

EFL game to watch – Hull v Sheffield United
Only one offering from the Football League on Sky Sports this weekend and it’s 21st hosting 19th.

For the Blades it was a wretched start to their bid to make an immediate return to the Premier League. Three defeats and no wins in their opening five painted a grim picture but some late transfer business – including the signings of Conor Hourihane, Morgan Gibbs-White and Robin Olsen – and a 6-2 pummelling of Peterborough last weekend has lifted spirits.

Hull made a splendid start with a 4-1 win at Preston on the opening day, but Grant McCann’s men have lost four out of six since. More worryingly, they haven’t scored a goal in any of those matches.

You’re going to clean the car instead, aren’t you…

The 7:30pm showing from Ligue 1 is PSG hosting Lyon, though the visitors’ mixed start means this isn’t the top-of-the-table clash it so often is.

Nor is Juventus v Milan, owing to Juve’s struggles. The Old Lady is winless and 16th after three games but the contrast between their fortunes and those of Milan, with their 100% record, may sway you into opting for a taste of Italy rather than France.

Zlatan should be back for Milan at his former club, but having given Ibra v Van Dijk the big build up in midweek, we’ll say no more.