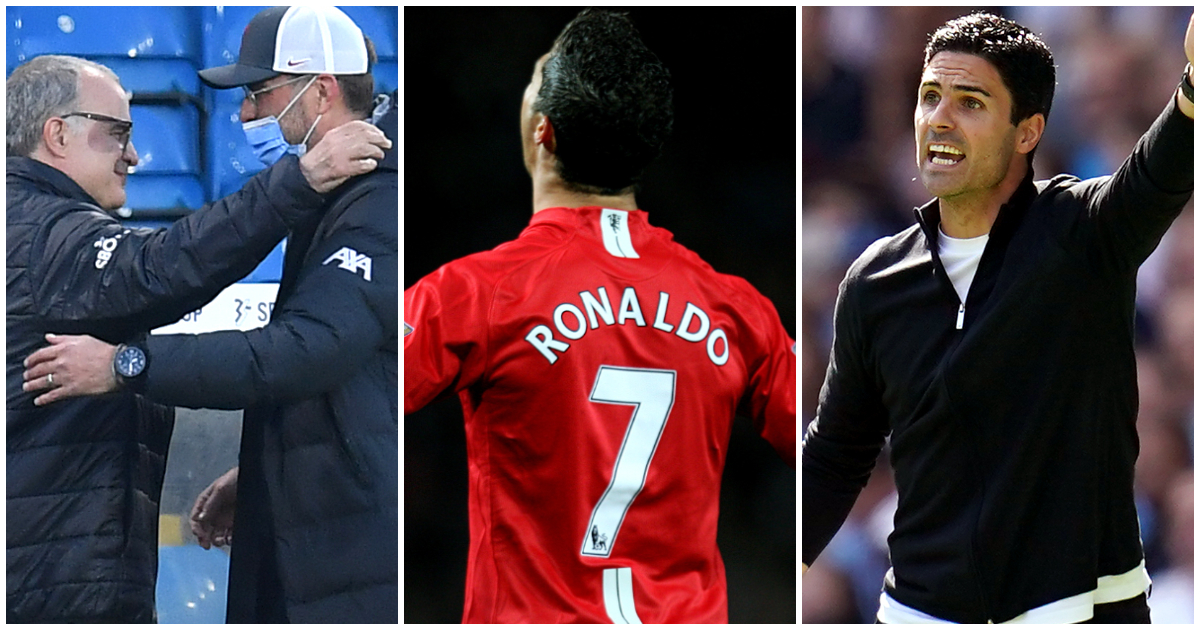 After 12 years, Ronaldo will be back in a Man Utd shirt. And after two weeks respite, Mikel Arteta is back under the cosh at Arsenal. Then there’s Klopp v Bielsa…

Game to watch – Leeds v Liverpool
Jurgen Klopp was already worried about the trip to Elland Road before the Brazilian FA made his life more difficult this week.

Immediately after drawing with Chelsea and failing to capitalise on their one-man advantage, Klopp’s mind was already drifting towards West Yorkshire.

Bemoaning the interruption of the international break and the assignment that followed, the Liverpool manager said: “This is one of the most intense games in the world of football because they run like madness.”

Indeed Leeds do. But Liverpool are hardly shrinking violets when it comes to energy and intensity. For 90 minutes at Elland Road, we can expect two sides going hell for leather with little to no respite. It could be the closest thing to Marcelo Bielsa’s murderball on the Premier League stage.

Each side, however, will be missing their Brazilian big names. As it stands, Liverpool will be without Alisson, Fabinho and Roberto Firmino; Leeds will miss Raphina. You might argue that Leeds could suffer the most, though Bielsa at least has Dan James ready and waiting for a Leeds debut.

So while the Brazilian FA acting the d*ck offers each manager an excuse should they need it, the strength in depth in both squads means absences shouldn’t hamper the relentlessness of the Premier League’s only offering on Sunday, a year to the day since Leeds and Liverpool played out a daft seven-goal thriller. Similar madness is expected once more. And a bit of needle carried over from April’s 1-1 draw in the aftermath of the ESL disaster wouldn’t go amiss either.

Player to watch – Cristiano Ronaldo
Scott Carson may be in line for his second Premier League appearance in over a decade but, somehow, the modern-day Richard Wright won’t be the headline act this weekend.

That billing, of course, goes to Ronaldo. In case you missed it, he re-signed for Man Utd a fortnight ago. Keep up.

There have been questions this week over whether the 36-year-old will play against Newcastle on Saturday, which is ludicrous. If Ronaldo is fit – and that he certainly is – Ronaldo plays. Ole Gunnar Solskjaer knows how to pander to the United crowd, and giving them their returning hero from the start is the simplest tap-in the manager has ever been given.

Old Trafford will be buzzing, not only for Ronaldo’s return after 12 years and 118 days away from the Premier League, but also the first glimpse of Raphael Varane at the Theatre of Dreams in something other than an immaculately-fitting suit. Jadon Sancho too could make his full home debut.

All of which spells trouble for Newcastle. Steve Bruce has enough problems before his side turn up at his old stomping ground with nobody expecting anything other than a homecoming parade.

Ronaldo’s record doesn’t bode well for Bruce or Newcastle. Of all the current Premier League clubs, the Portugal star has only scored more often against Villa. Newcastle have never beaten a side containing Ronaldo, who has netted five and assisted three in 10 games against the Magpies.

Team to watch – Leicester City
It’s been barely a month since Leicester last beat Manchester City. The weeks since have seen the Foxes get off to a mixed start in the Premier League and the international break came at an opportune time for Brendan Rodgers, who had to name two keepers on the bench in the win at Norwich simply to make up the numbers.

A fortnight later, Leicester should be better equipped to repeat that Wembley triumph over City. Rodgers’ injury concerns have had time to ease and the Foxes filled the one major hole they had in their squad before the deadline.

Fittingly, Ademola Lookman will take his turn to fill the Riyad Mahrez-shaped hole on the Foxes’ flank when Mahrez’s City come to the King Power. With two of his major concerns being addressed, now Rodgers must find a remedy for the form of some of his most influential players.

Caglar Soyuncu endured a rotten start to the season, though he has hardly been helped by the absence of Jonny Evans and Wesley Fofana. Further forward, James Maddison is yet to get his season going while Harvey Barnes is still searching for the sharpness robbed from him by last season’s knee injury.

Overall, Leicester have been, in Rodgers’ words, “a long way off” during the early weeks of the campaign. Yet still they have claimed two wins from three matches. Against the champions, there will be no room for a similar failure to meet Rodgers’ expectations and fewer excuses.

Manager to watch – Mikel Arteta
The Arsenal boss has survived the international break, which is perhaps not a surprise given there is very clearly little appetite for a change among the Emirates hierarchy. And with that being the case, a fortnight’s respite will have come as some relief to Arteta while also shifting the focus away from how wretched his side have been to whatever else it is that people think about when internationals take over.

Arteta’s mitigation so far, aside from the opening-day defeat at Brentford, has been the quality of the opposition Arsenal have faced. In their last two games, the Gunners have come up against the two favourites for the title, with each demonstrating the gaping chasm between themselves and Arteta’s dysfunctional mob.

Arsenal have no excuse this weekend when they face the only side with a similarly dreadful record so far. Norwich sit above Arsenal in the table only on account of the single goal they have scored, though their opening has been tougher than the Gunners’. And Arsenal haven’t even managed to do a goal in the Premier League.

So what does Arteta do about it ahead of a must-win, must-impress encounter? There must be changes. The line-up at the Etihad featured at least four players Arteta has tried hard to oust in the last year. There will certainly be changes at the back, with Aaron Ramsdale set to replace the hapless Bernd Leno in goal, while Ben White can return. Thomas Partey is back too, with the midfielder able to takeover from Granit Xhaka after his overdue brain fart at Manchester City.

The last Arsenal fans – those who stayed to the end of the 5-0 humping at City – saw of their players was as they were sheepishly apologising for what they had, or had not done at the Etihad. Those apologies were taken with surprising grace from a hardy crew of Gunners, but similar forgiveness will not be forthcoming – for the players or Arteta – if there isn’t redemption aplenty on Saturday.

Football League game to watch – Birmingham v Derby
Ronaldo’s isn’t the only homecoming this weekend. Against Derby at St Andrew’s, Troy Deeney will be back among his Brum brethren.

Deeney hasn’t pulled on a Blues shirt before but never has he hidden his emotional tie to his boyhood club. His debut, in a clash between two terribly-run clubs in recent years, forms the first part of Sky Sports’ EFL offering this weekend, with Forest hosting Cardiff available as an appetiser to Leeds v Liverpool on Sunday afternoon.

For a more in-depth tactical preview of Birmingham versus Derby, Benjamin Bloom has you covered.

European game to watch – RB Leipzig v Bayern Munich
Bayern have done their very best to make life easier for themselves ahead of their trip to Leipzig on Saturday evening, having pilfered their rivals’ manager and two of their best players over the summer. It’s just what they do.

So Julian Nagelsmann, Dayot Upemacano and Marcel Sabitzer make swift returns to their former club on matchday four. Though neither player is certain to feature, with Upemacano injured and Sabitzer facing a task to dislodge another Bayern midfielder, but Nagelsmann will recognise an opportunity to get at the defence he built then partially demolished this summer.

Jesse Marsch’s rebuild of Leipzig’s rearguard has been beset with injuries too, so the last thing they need is to face Robert Lewandowski in his current form. The Bayern striker has five goals already this term, the same tally he had at the same point last season when he broke Gerd Muller’s Bundesliga scoring record.