Chelsea v Spurs should be terrible but intense. Will Lampard find the answers or can Lo Celso inspire a famous victory? 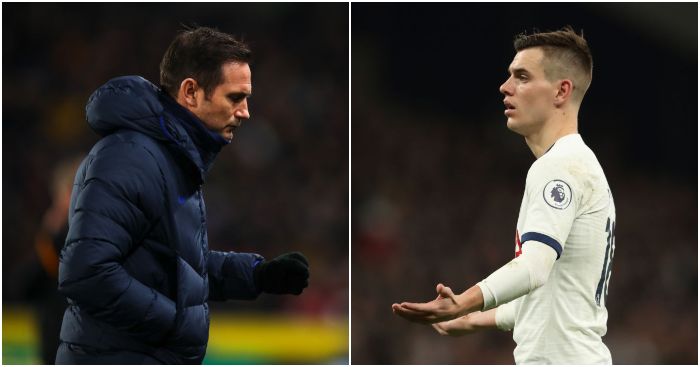 Game to watch – Chelsea v Tottenham
It was already as feeble a race for the top four as it would have been possible to imagine but now, because of Manchester City’s ban, both of these teams might sneak back into the Champions League.

Which is a bit silly, because Chelsea and Tottenham are really as bad as each other. Jose Mourinho is determined to get Tottenham to sit ever deeper with each game, while Frank Lampard seemingly has no idea how to attack sides who come to Stamford Bridge with any sort of defensive gameplan.

Harry Kane and Son Heung-min are out. So too are Tammy Abraham and Callum Hudson-Odoi. Mourinho will instruct his defenders to play long towards 5ft 7in targetman Lucas Moura, while Lampard – who is eager not to undermine himself by revealing that Olivier Giroud has actually been his best option all along – will start the game with Michy Batshuayi to spite himself.

Well, it might be. These two teams still hate each other. The two sets of fans have never stopped hating each other and, whether they’re deserving or not, the stakes are high.

So it probably won’t have a lot of technical merit, but it will be quick, hostile and hugely important to both sides.

Team to watch – Manchester United
Actually, United were OK on Monday. It’s easy to pick holes in their performance, the first half in particular, but their shape worked, their best players performed, and they won the game.

Unfortunately, it conforms to a pattern. Impressive result as it was, it was a fairly formulaic victory and the type we’ve seen before – and the kind which hasn’t necessarily instructed a strong run of form.

So Watford are an interesting opponent. Some aspects of Monday night – Bruno Fernandes’ set-pieces and creativity, Anthony Martial’s more aggressive performance through the middle and the partnership between Eric Bailly and Harry Maguire – should carry over, but they haven’t scored in either of their last two home games, are subsequently without a Premier League goal at Old Trafford since January 11, and haven’t won back-to-back league games since December.

So, yes, Monday night was positive, but away from home is not where the problem lies; that needs addressing quickly if United are to make a run at the Champions League places.

Player to watch – Giovani Lo Celso
If Tottenham are able to take something from Stamford Bridge, it will come from the feet of Lo Celso.

Creatively, he’s their most obvious threat. Not just because of how he sees a game and the range of passes he can play, but also the way in which he attracts defenders. With Dele Alli badly out of form, he’s the one Spurs player who can be unpredictable and for a forward line consigned to having to play on the counter and rely entirely on its pace, that’s a godsend.

But Lo Celso plays slightly deep for a reason. He’s a central midfielder, not a No.10, and so part of his role is to help his side transition out of defence – which, given the state of Tottenham’s exits at the moment and how willingly they surrender possession, will arguably be more important than anything he does at the other end of the pitch.

It’s a big ask. He needs to be in position to receive passes from his defenders, but also to prevent any attacking moves from just flaring out in isolation. Ultimately, though, either he’s up to that task or Spurs will lose.

Manager to watch – Frank Lampard
Lampard’s difficulties at home aren’t going away. Most recently, Manchester United came to Stamford Bridge and won 2-0 with a touch of good fortune, but also after having played little more than quite well. But that was enough and nobody was really surprised by the result. Liverpool beat Chelsea away. So did Bournemouth, so did West Ham, so did Southampton. Arsenal got a point, just like Leicester and Sheffield United, too.

Along the way, Lampard has developed that “I’m not making an excuse, but… here’s an excuse” habit and, less than eight months into his job, that routine is really beginning to wear thin. Particularly as all the results listed above could be described in the same way, with near-identical issues and failings.

Chelsea have had some injury trouble and – yes – their transfer ban did stop them from strengthening last summer, but there’s been more than enough quality available with which to fashion a response. If Lampard fails to inspire a Chelsea win against Tottenham – a team who can’t defend or attack properly, or even score goals – then there can be no pleading poverty or shifting the blame onto his players.

Eventually, he and Jody Morris have to show that they can think their way around the kind of problems which occur at this level of the game.

Football game to watch – Derby v Fulham
Fulham really need to start winning. The draw with Millwall was played in dreadful conditions and on an uneven pitch. There’s mitigation there. The defeat to Barnsley, however, was the worst performance of the season and will need an urgent correction. Just six points separate Scott Parker’s side in third and Cardiff in ninth, so it’s really not the time for barren form.

European game to watch – AZ Alkmaar v PEC Zwolle
It’s a fallow weekend in Europe, with nothing which stands out. AZ are worth watching, though, because their team is full of players that Europe will become increasingly familiar with over the next few years.

Calvin Stengs is a wide playmaker; think Callum Hudson-Odoi without the pace but with slightly more craft. Teun Koopmeiners is a deep-lying playmaker – lovely left-foot, but quite Michael Carrick-ish – who should be in a major league within the next 18 months. And Oussama Idrissi is having a brilliant season on the left of AZ’s front-three. He’s part Ben Arfa, part Depay, and although he’ll probably never quite reach the same heights or status, there are still worse players to watch on a Sunday afternoon.