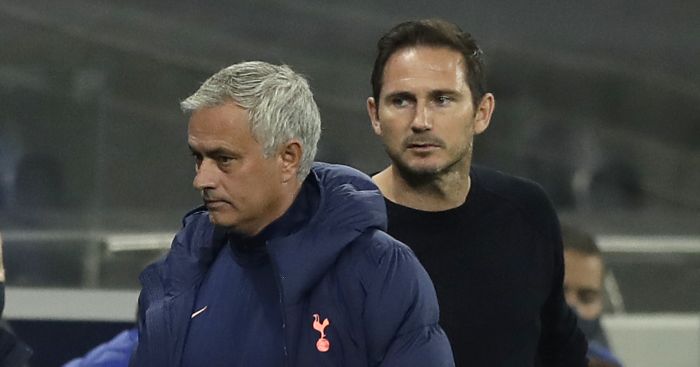 Game to watch – Chelsea v Tottenham
Tottenham the game to watch again. Get used to that for a couple of reasons. First, obviously, they’re top of the league for now at least. Second, it’s quite the run of games. City last week. Chelsea this week. Arsenal next week. Then Palace, which, no offence, might not make the cut, and then a certainty for Big Midweek against Liverpool. And then Leicester. Blimey. If Spurs are still top at Christmas after that little lot then we really will have to start making proper preparations for Jose Mourinho winning the league.

For now, though, let’s focus on this. Should be good, shouldn’t it? Both teams were in European action in midweek, with Chelsea’s two-day advantage from playing on Tuesday night offset by Spurs having the luxury of sending out a second – and by the end of the night third and fourth – string side to take a short break from playing cricket in the gym to stroll to a 4-0 Europa League victory.

In more meaningful action, both teams have reacted to silly 3-3 draws by adding a layer of steely resolve to their play and remorselessly picking up points ever since. Spurs did an absolute job on Manchester City last week, while the doubts that linger over Chelsea are in how they fare against the division’s best sides, of which Spurs are undeniably one. The Blues’ only three games thus far against teams currently in the top half were wildly contrasting yet equally disappointing draws against Southampton and Manchester United, plus a tame defeat to Liverpool that sent Frank Lampard into an alternate reality for a spell.

Spurs lost to Everton and had the West Ham wobble but have also thrashed Southampton and Manchester United as well as dealing with City so adroitly. It points to an away win here, and with both teams having tightened up defensively over recent weeks a low-scoring, defence-dominated tussle could be on the cards. You’d have to favour Jose Mourinho over Frank Lampard in a master-against-apprentice contest should it pan out that way, while Spurs are also the more precise and efficient of the two sides in attack.

Player to watch – Andy Robertson
A step back for Liverpool in the Champions League with a rare home defeat, and suddenly a nagging sense that Jurgen Klopp’s continued tilting at broadcasters might have tipped over from entertainingly righteous to unnecessarily distracting.

While Klopp may rage at the kick-off time, he can’t complain about the opponents with a trip to generous hosts in Brighton, a side that struggle enough defending against crosses and face the added headache of coping without the excellent Tariq Lamptey for this one as he serves a suspension.

Enter Andrew Robertson. Three assists already for the left-back this season and an obvious opportunity to add to that tally here and help Liverpool back to the Premier League summit they made their own last season but have generously shared around a bit so far this year.

Team to watch – Manchester United
Still just a really weird team. Still not remotely convinced they’re any good and the manager certainly isn’t, but they are still Manchester United and they’re still going to have some good runs of form along the way. Currently on a three-game winning run but facing the sort of game that looks perfectly designed to bite them in the arse.

Southampton lost their first two games of the season but are unbeaten since then and have dropped points only at Chelsea and Wolves. They certainly won’t fear United and are, with the glaring exception of that frankly weird second half against Spurs back in September, extremely adept under Ralph Hasenhuttl at finding ways to set up that negates their opponents’ strengths while preying on any weakness.

United have lurched from good run to bad and back again for a while now, and this fixture feels like a decent litmus test. Get a result and it starts to look and feel a bit more like a corner truly being turned. But lose and they’re right back where they started on the Crisis Club naughty step.

Manager to watch – Mikel Arteta
Of the three rookies currently in charge at huge Premier League clubs, Arteta still gives the impression of being the most capable and clear-headed. You’d still back him to be the one who could one day get a big coaching job without the leg-up of having played for the club in question.

But right now he’s the one struggling the most. They just need to score some goals. The last couple of years have been full of nonsense stats about how and what Arsenal would be if you arbitrarily removed Pierre-Emerick Aubameyang’s goals and assumed nobody would replace them. It’s a farcical and nakedly illogical game to play, yet Arsenal appear determined to bring it to life. We are now seeing exactly what that formerly hypothetical Arsenal side would look like, and it’s not pretty.

They’ve taken just four points from their last five games, but more damningly the only goal they’ve scored in that run was Aubameyang’s penalty at Old Trafford.

And it gets no easier. This week it’s Wolves, who have conceded just three goals in their last six, and then a trip to a Spurs team who have suddenly decided to have the best defence in the league for some reason.

Time to show us something, Mikel. Anything. Please.

Football League game to watch – Nottingham Forest v Swansea
Forest are Championship football in frankly dangerously pure form. Last season’s late collapse to miss the play-offs was an all-timer, and it was no great surprise that the hangover extended to this season and four straight defeats to start the campaign.

Since then, they’ve won three, drawn three and lost three. Swansea’s last nine games have produced three wins, four draws and two defeats. Textbook Championshipping. One of them is fourth, the other is 20th and it’s literally impossible to pick a favourite. Tremendous.

European game to watch – Napoli v Roma
Because really, how could it be anywhere else?