Chelsea v Liverpool could be ridiculously fun. And Jose Mourinho could be under unimaginable pressure. 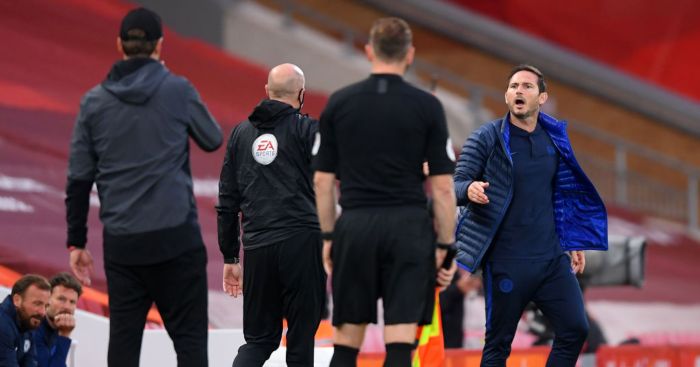 Game to watch – Chelsea v Liverpool
Cracking set of Premier League games this weekend but really there’s little doubt about the headliner. Champions travel to Contenders and both have issues to address after opening the season with entertaining but not quite convincing victories.

Liverpool won that nonsense of a game against everyone’s new second favourite team Leeds (which is itself surely the maddest occurrence of 2020 thus far) while Chelsea made hard work of seeing off Brighton.

Both, though, should improve for the run and it’s hard to imagine Liverpool in particular being quite so carefree against Chelsea after that Leeds scare.

But what of Chelsea? It’s hard to see Timo Werner or Kai Havertz abandoning their strategy of running on the shoulder of the last defender against that enticing high Liverpool line. But if Chelsea pour forward in numbers as they are wont to do then they also play right into Liverpool’s hands.

It’s an intriguing early-season mash of styles between two of England’s heavyweights and it’s not hard to see it delivering plenty of goals. Liverpool’s 5-3 win back in July may have been a freewheeling end-of-season party but you can’t entirely rule out something similar based on last weekend’s evidence.

Goalless draw it is, then.

Player to watch – James Rodriguez
We’re not saying James’ inspirational, entire-club-lifting debut at White Hart Lane 2.0 last week is the sole reason that Daniel Levy has started chucking money at Real Madrid to try and get something similar going at his own club, but we’re not not saying it isn’t either.

James dispelled a great many of the doubts around his Everton move in a sparkling debut and thoroughly deserved win at Tottenham, a team the Toffees very rarely get the better of and certainly haven’t recently.

He was far from alone in excelling against a drab Spurs team, but there’s little doubt he’s already the star of an exciting Everton show. It could all go to shit at any minute, of course, but that’s just all the more reason to drink it in while we still can. The fragility of the whole thing is part of the beauty.

And even this early in the season, Saturday’s home clash with West Brom feels like a big one for Everton. There is genuine optimism for the first time in a while that there is at last a manager and squad in place to lift them from the mid-table malaise of the last half-decade. Winning at Spurs was a tremendous first step, but you really don’t want to piss all those happy feels away the very next weekend at home to a newly-promoted side.

Team to watch – Leeds
That was a lot of fun, wasn’t it? Everybody Loves Leeds. And they were fantastic against Liverpool, no question about it.

But it was also a free hit. Their first game back in the big time after so long away, at a ground like Anfield. It couldn’t fail to be glorious.

This weekend it’s all business. At home, against a fellow promoted club that looks far, far, far less equipped for the step up in level. Leeds have already won plenty of admirers; this weekend it’s time to win those first three Premier League points.

Manager to watch – Jose Mourinho
He’s already under huge pressure. Or at least he should be. His team were just awful against Everton and just as bad on Thursday against the sixth-best team in Bulgaria. Spurs really were 10 minutes away from total humiliation in Plovdiv and they need things to change fast.

Southampton, surprisingly beaten by Palace on the opening day, are not a side you want to face with confidence so low. They are not big enough or good enough that defeat can be easily explained away, nor are they anywhere near bad enough not to take advantage should Spurs replicate their efforts of the last week. They are a nightmare for a wounded, confidence lacking side to face, adept at identifying and picking at weaknesses. They should have plenty to go at.

Before and after this game the Spurs focus will all be on just what kind of Gareth Bale the club have brought back after his seven-year spell in Madrid. But during it Mourinho needs to show something, anything, to suggest that Bale is a huge addition to a talented squad and not a desperate one-man rescue mission.

Two defeats in two against clubs outside the elite with the daunting fixture list Spurs face in the early part of this season would be unthinkable.

Football League game to watch – Nottingham Forest v Cardiff
With two games of last season to go, Nottingham Forest’s task to secure a play-off spot was a simple one: collect but a single point from games against the teams in 24th and 17th in the league, and if you can’t quite manage that then just make sure you don’t get spangled 4-1 in the final game. At home.

Having failed to succeed in that task, Forest have gone on to suffer Carabao Cup first-round disappointment and lose their first league game of this season 2-0 to a side that finished 13th last year.

What we’re saying is watch this association football match if you haven’t yet quite had enough of seeing people suffer horribly this year.

European game to watch – Bayern Munich v Schalke
Never pass up the chance to see Bayern play a Bundesliga match against a team they’re level on points with. Nights like this don’t come around all that often.