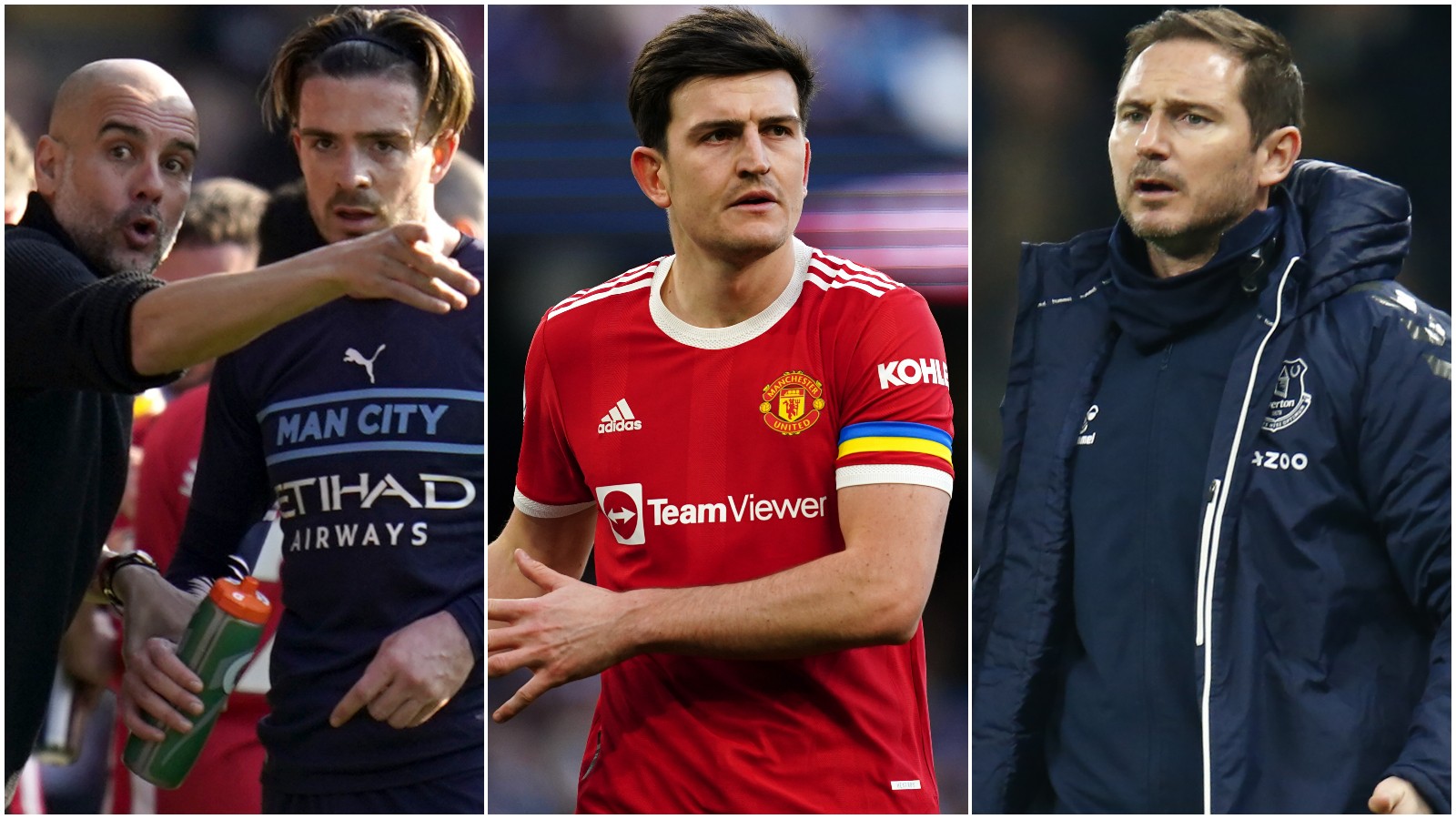 The Premier League is back after what feels like a six-month international break. And it’s a huge weekend for Frank, Harry, Pep and the whole of Glasgow.

Game to watch – West Ham v Everton
Everton’s euphoria over their late, late win against Newcastle lasted all of two days before it was washed away by a woeful FA Cup exit at Crystal Palace that had Frank Lampard reaching with his good hand for his list of excuses once more.

A lack of “b*llocks” was his latest one, no doubt the consequence of previous mis-management rather than any reflection of his own leadership qualities.

Lampard needs desperately to hope that his players have grown a pair when they go to West Ham on Sunday for the first game of a tough-looking run-in. The Hammers, in contrast, are buoyant, reaching the Europa League quarter-finals while sitting on the fringes of the Big Six – exactly where Everton aspire to be but have never seemed so far away from.

David Moyes was the last manager to get the Toffees close and both managers will be coming up against former clubs. Though Lampard is unlikely to feel the love from either the supporters of the club where he began his playing career or fans of the one which could end his managerial one.

At this stage, it is difficult to see how Lampard turns this around with huge problems in defence and attack, while his players won’t fail to notice the manager disassociating himself with the team’s failures at every opportunity. But turn it around he must, starting at West Ham, especially with an even bigger clash at Burnley in midweek.

Carragher believes ‘Everton are the worst run club in England’

Player to watch – Harry Maguire
Regardless of your take on England supporters booing the defender this week, no-one can doubt that the Manchester United captain desperately needs a big performance this weekend. Or even just a competent one.

Maguire has endured a miserable season leading up to being jeered at Wembley. His international manager and teammates have rallied around the centre-back, who has been largely solid for his country. For United, though…

He’s hardly alone in struggling for the Red Devils. But Maguire, as skipper, has bore the brunt of much of the criticism and plenty of it has been deserved. England fans are not the only ones to make clear their discontent – Maguire’s substitution in the late stages of the defeat to Atletico Madrid was cheered by some of the Old Trafford faithful. Perhaps they will rally around the captain on Saturday evening, but it should not be forgotten that United fans chose to deride their own player, too.

The visit of his former side Leicester couldn’t come at a worse time for Maguire but, for once, he might cop a break with Jamie Vardy struggling with a knee injury. The Foxes striker, who would doubtless relish the chance to expose his former teammate’s fragility, seems unlikely to feature. But whomever Maguire has to mark, assuming he makes Ralf Rangnick’s XI, they have to be pocketed.

Manager to watch – Roy Hodgson
The Watford manager is another Premier League figure reuniting with a former club this weekend. And, if anything, Hodgson is remembered even less fondly by his former supporters than Maguire or Lampard.

Ex-Liverpool boss Hodgson takes the Hornets to Anfield for a daunting Saturday lunchtime assignment against a rampant Reds side looking to go top of the table, even if only for a couple of hours.

Hodgson was appointed to solidify Watford and occasionally he has. They have taken points from three of their last six games, including the win at Southampton last time out. That was three weeks ago, though, and that victory prolonged the Hornets’ inconsistency. They lost the other three games in that run while conceding 11 goals and despite the extended break, because of the internationals, Hodgson has had little time – perhaps just one session – to prep his defence for Liverpool’s flying forward line.

At least his assistant, Ray Lewington, saw “some signs” in that win at Southampton and evidence of “a good unit” for the first time since he came out of retirement with Hodgson to lead the Hornets’ survival fight. After a prolonged, ill-timed break we await to see which Watford side shows up at Anfield.

Team to watch – Manchester City
With Liverpool expected to make Hodgson suffer, the onus will be on City to do the same to a Burnley side fighting for their lives at Turf Moor.

It marks the start of a season-defining period for Pep Guardiola’s men. After the short trip to Turf Moor, City face a 12-day period in which they play Liverpool and Atletico twice each across three competitions.

So as well as posing a test they must pass ahead of a huge fortnight, Burnley offer Pep an opportunity to get a handle on where his side are after one disappointing result at Crystal Palace that left the door ajar for Liverpool and another below-par performance which bore little resemblance to the one-sided scoreline against Southampton in the FA Cup.

Now would be a wonderful time for Jack Grealish to come to the party. The £100million signing insisted this week that Guardiola is content with his contribution even if many others expect more for the money than two goals and the same number of assists. But Grealish is not the only Citizen with room for improvement and the suspicion remains that Guardiola is unsure of his best XI – he say he doesn’t have one – going into a dozen days that will make or break City’s season.

EFL game to watch – Barnsley v Reading
The broadcast selection for this weekend’s Championship matches has ignored the biggest game, that between the Tykes and Royals, the hosts currently one place below their visitors but just the wrong side of the relegation divide.

For a full preview of that game and all the second-tier action, check out Benjamin Bloom’s Championship Big Weekend.

In addition to Hull v Huddersfield on Friday night and Blackpool v Forest on Saturday lunchtime, Sunday’s offering comes in the form of the Papa John’s Trophy final at Wembley between Rotherham and Sutton. Tune in for kick-off at 3pm if Everton have already chucked in the towel at West Ham.

European game to watch – Rangers v Celtic
It’s a biggie across Europe with top-four clashes in Germany, Spain and Italy. On Saturday evening, Borussia Dortmund face RB Leipzig, while on Sunday night, it’s the Derby d’Italia between Juventus and Inter at a similar time as Barcelona host Sevilla.

In Scotland, though, it’s first versus second in one of the most important Old Firm clashes in recent years. If Celtic win at Ibrox, they go six points clear with six games to go. Should Rangers triumph at home, Celtic’s advantage is reduced to goal difference.

For Giovanni van Bronckhorst, defeat is not an option. Which makes fascinating the approach of the managers. Van Bronckhorst lost his first derby at the start of February with Celtic winning 3-0 at Parkhead, but Ange Postecoglou also tasted defeat in his maiden Old Firm clash when the Gers’ edged the Hoops 1-0 back in August.

Does Van Bronckhorst go for victory at the risk of exposing his defence to Scotland’s most dangerous attack? Celtic have scored seven more goals than Rangers this season but they are underperforming their xG by 13.3. Celtic haven’t lost in 25 league games; Rangers have dropped points five times since the winter break, through they have won their last three.

Whether it’s must-win or must-not-lose, it will be a must-watch.