This weekend will surely buck the trend of boring Merseyside derbies. The rest ain't bad either. 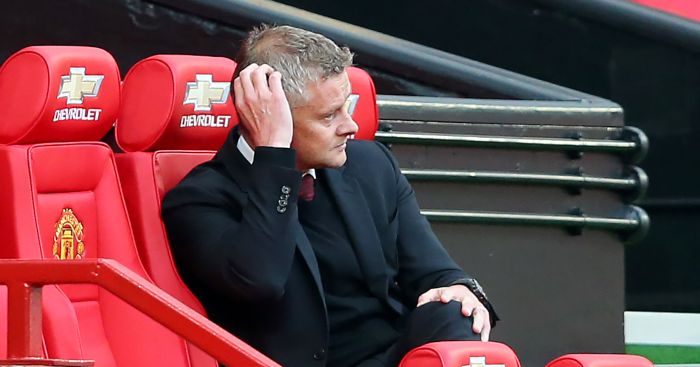 It’s been an interminable two-week wait to get back to the fast-forward insanity of the Barclays, but it’s also going to be well worth the wait. It’s a genuinely brilliant set of fixtures.

Even the ones a neutral wouldn’t have looked at twice when the fixtures came out – your Sheffield United v Fulhams, your Leicester v Villas – now have plenty of intrigue, while we’ve also got Tottenham v West Ham, a fixture that rarely disappoints, and Manchester City against Arsenal as well as a non-local derby between Brighton and Palace.

Okay, Monday’s double-header starts with West Brom against Burnley which is a tougher sell, but Leeds against Wolves should be good, shouldn’t it? Yeah?

Basically what we’re saying is that there are lots of really good Premier League fixtures this weekend. We took our sweet time over it, but that’s what we’re saying. And we’re saying that to set up the main point, which is as follows: even though there are all those other really eye-catching games that you should definitely also watch, there is still one game that totally and utterly and massively stands out above them all.

Everton v Liverpool. Now we’re talking. For obvious reasons, it’s always a pretty big deal. For even more obvious reasons, this season it’s a really, really big deal. It may only be the fifth week of the season, but it must rank as the biggest local derby – not just Merseyside derby – in the Premier League for quite some time.

Everton. Brilliant, brilliant, joyous-and-fun-filled Everton. Beating everyone in sight, doing all the goals, having all the fun. James Rodriguez. Dominic Calvert-Lewin. Richarlison. Isn’t it? Hmm? Enduring image. Everton are great. They’ve won all their games this season, and if that is still the case by 3pm on Saturday afternoon then they will be sitting pretty at the top of the Premier League six whole points clear of the team that absolutely pissed the league last season and who also happen to be their biggest and most hated rivals.

And they’re a team that lost their last game 7-2.

Historically – i.e. up to a few months ago – this is a fixture that ends goalless as Everton strive every sinew to deny their bigger, flashier neighbours. There has been literally one Merseyside Derby goal at Goodison in the last five years. But surely not this time. Surely not. We demand goals and goals we shall have.

Very silly indeed for a team outside the absolute elite to have a front three of Son Heung-min, Harry Kane and Gareth Bale. Based on everything we’ve already seen from the first two this season, plus everything we’ve seen from literally every single defender in the league, Christ alone knows what’s going to happen when you add Bale to the mix.

All the predictable reports about how good Bale has looked in training are present and correct, and let’s be clear: if he’s even half the player he was a couple of years ago before ennui and g*lf took hold of his soul, then he’s going to have a whale of a time in this farmers’ league.

The only thing worse than losing 6-1 at home is losing 6-1 at home just before an international break so that you and everyone else has two weeks to stew over the result. The press have had their fun, things have not got any better for Harry Maguire after swapping the Manchester United glare for the England glare, there have been reports of a rift with Bruno Fernandes and, above all, the fact remains that not one of the other 19 Premier League clubs – not even Fulham – would currently swap managers with Manchester United.

Say what you like about Moyes or Van Gaal, even at their worst moments they were never the worst manager in the whole division.

Newcastle away is a sub-optimal fixture to come back to. Tricky enough that victory is far from assured – they’ve dismantled West Ham and pinched a point off Spurs already this season – yet easy enough that anything other than victory with some style is going to keep the United In Crisis narrative rumbling on.

In a Premier League gone mad, City could do with exerting a bit of authority and trying to reestablish a sense of normality. Before 6-1 and 7-2 came City’s own disintegration in a 5-2 defeat to Leicester which was followed up with a 1-1 draw at Leeds.

Happily, City have precisely the fixture in which to restore that much-needed equilibrium and stability. Arsenal at home, a fixture City have won 3-0, 3-1, 3-1 and 2-1 in the last four seasons. Get in and get the job done before Thomas Partey has a proper chance to knit together the gaping holes in Arsenal’s midfield and make them a proper team to be reckoned with. Lovely.

But if City don’t do that, they could find themselves a scarcely credible nine points off the pace already come Saturday evening. What a season. What a year.

Because we might as well keep the local rivalry theme going with this little Derby della Madonnina tussle at the San Siro.

Inter have held the upper hand in this fixture and were 4-2 winners in the last clash a few months ago, but are without a whole host of players – including Ashley Young – who’ve tested positive for coronavirus. Milan, for their part, have won three from three thus far without conceding a goal to sit behind Atalanta on goal difference at the top of the table.

And there’s also a bit of Celtic v Rangers this weekend as well if you still haven’t had your derby fill.

While talk of Wayne Rooney taking over as Derby manager has sadly been dismissed as ‘laughable’, they have signed Colin-Kazim Richards. So they remain a reliably nutty football club. They currently sit 20th in the table, although they did get their first points of the season just before the international break thanks to a late Rooney winner at Norwich.