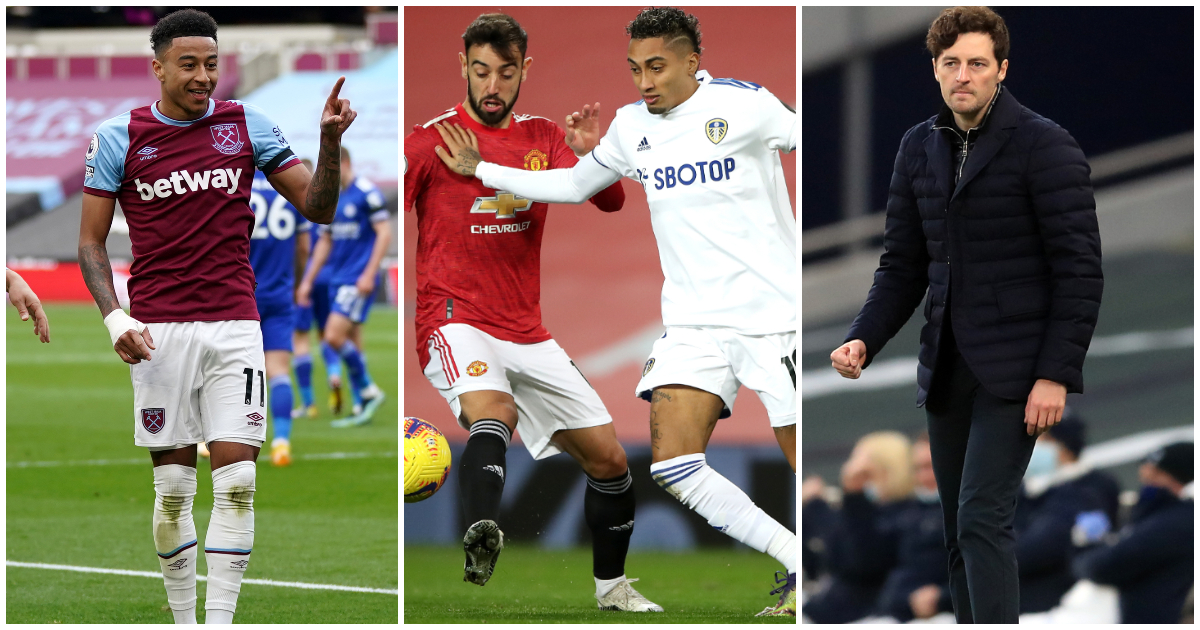 The Leeds welcome committee will surely be out for Man Utd, while Ryan Mason and West Ham have golden opportunities…

Game to watch – Leeds v Man Utd
For Leeds, it’s their most anticipated game of the season. And, had they been allowed the pleasure of running the Elland Road gauntlet, it would be viewed the same way by Manchester United’s travelling supporters too.

Sunday’s meeting could be the Premier League match where the absence of fans in stadiums is felt most this season. Under normal circumstances, United’s first league trip to Leeds in 17 and a half years would see all West Yorkshire Police leave cancelled and Elland Road – and the surrounding streets – absolutely rocking.

Instead, the Trafford Red Devils will visit a stadium likely more sparse than the car park upon their arrival. The Merseyside Reds were unhappy with their welcome on Monday. That will have felt like a warm, cosy hug compared to the reception United’s coach will receive.

While the home supporters are fuelled by genuine hatred, their players and beloved manager will surely be motivated by revenge. Leeds have thrilled and wowed us all this season, especially when they went to Old Trafford, but for all the wrong reasons.

Leeds flew at their hosts in December in a kamikaze mission and, unsurprisingly, they were shot down at will. United scored six, they could have scored 10. How will Bielsa react to that humbling?

He won’t. Having likely spent all week analysing the living sh*t out of United, the Leeds boss will send his players out to play exactly like they always do. So he should. Aside from that Old Trafford trouncing, Leeds have more than held their own against the snakey six.

Indeed, having played four of them at Elland Road, they are yet to lose. Okay, so they are yet to win too, but they remain the only side not to have lost at home to any of the clubs entering the weekend with their tails firmly between their legs. And the other big-hitter – in their own minds at least – Leeds haven’t faced is Spurs.

It’s a pity that there are no fans, and that there’s not more at stake in terms of Premier League consequences. But it should still be an absolute treat.

Manager to watch – Ryan Mason
I still use a pair of shinpads roughly the same age as the interim Tottenham manager. Which is testament to both Mason and my tatty Robson Golds.

In his second game in charge, Mason could deliver Spurs’ first trophy since roughly 1743. The fact he is in charge at all is quite remarkable given a) he’s twenty-f*cking-nine, and b) Jose Mourinho was supposedly the manager for cup finals. Certainly a cup final like this.

We presumed that Spurs would have to frustrate the hell out of City at Wembley, much like they did back in November. Jose absolutely Mourinho’d Pep Guardiola five months ago, when Spurs were top of the league and the City boss was getting pelters.

But, apparently, things change. And few things prompt change like making Mourinho disappear. With his exit on Monday, when Daniel Levy was doing his best to distract from Tottenham’s dance with the devils, the mood shifted and it remains chipper in the wake of the last-gasp, come-from-behind win on Wednesday.

Okay, so that was against Southampton, who have been in shorts, sliders and sombrero since 2021 showed up. And on Sunday, Guardiola and the champions-elect await. But Mason’s presence where Mourinho would normally be slouched, and the obvious differences in the two styles, should make for an infinitely better game than we might have expected at the start of the week.

F365 Says: Ryan’s at the wheel as Spurs bask in the post-Jose glow

Team to watch – West Ham
David Moyes’s side are level on points with Chelsea ahead of the Blues’ trip across London this weekend, when the Hammers have a golden opportunity to steal a march on a Champions League spot.

As Thomas Tuchel admits, Chelsea are knackered. Physically because of their recent workload – they’ve played twice the number of games their hosts have since April 3 – and this week’s shenanigans didn’t help their mental outlook.

While this is a huge London derby for the Hammers, for Chelsea it isn’t even their biggest game of the coming week. That comes next Tuesday when the Blues have a Champions League date with Real Madrid and a sulky Florentino Perez. So Tuchel has little choice but to factor that into his team selection for Saturday.

This is unquestionably West Ham’s toughest game of their run-in and victory would set them up perfectly for the final straight. Come for the high stakes, stay for the goalfest. The Hammers’ last four matches have featured an average of 5.25 goals per game.

Player to watch – Allan Saint-Maximin
The Newcastle winger is probably the last Premier League opponent Trent Alexander-Arnold wants to face after a testing few weeks for the Liverpool right-back.

It is no coincidence that Newcastle’s revival has come at the same time Saint-Maximin returned to fitness. Without their thrilling dribbler, the Magpies looked destined for the Championship. But since he recovered from a groin injury, Steve Bruce’s side have taken seven from nine points to give them a nine-point cushion from the bottom three.

Bruce will point to Saint-Maximin’s injury woes this season as a primary reason for their struggles. With the French flier in 19 games, Newcastle have a win rate of 37 per cent. Without him for 13 matches, that drops to 15 per cent.

Saint-Maximin, Callum Wilson and Miguel Almiron have started just four matches together this term, mitigation Bruce will offer at every available opportunity.

An ankle knock could yet deprive Newcastle of their most exciting player at Anfield on Saturday lunchtime. Alexander-Arnold should probably hope so.

EFL game to watch – Derby v Birmingham
This for most teams is the third-to-last matchday of the Championship season and one that pits four of the five play-off contenders against each other, with third-placed Bournemouth hosting Brentford in fifth on Friday evening while defeat for Reading against fourth-placed Swansea at midday Sunday will end the Royals’ bid for the top six.

But in the absence of a Premier League fix at 3pm on Saturday, why not watch Derby soil themselves through 90 minutes against Birmingham?

Wayne Rooney is reliant on Rotherham being marginally more sh*t in the next fortnight than his Rams since the Millers are four points behind Derby with two games in hand. Rooney’s side have one win from their last 12 and having labelled Tuesday night’s trip to Preston as “must-win”, they promptly got beat 3-0 with goals described by the manager as “sloppy”, “soft” and “ridiculous”, in that order.

With Blues in decent form – they’re undefeated in five – Rooney must inspire a rapid improvement to halt the Rams’ slide into League One.

European game to watch – Lyon v Lille
Slim pickings on the continent this week, so we’ll head to France on Sunday evening when the leaders go to fourth-placed Lyon.

But Ligue Un is tighter than it sounds. A win for the hosts would see them overtake Lille on goal difference, with PSG hoping to retain the pole position they would gain from beating Metz on Saturday afternoon.

Then there’s third-placed Monaco to consider, with Niko Kovac’s side going to Angers on Sunday afternoon.