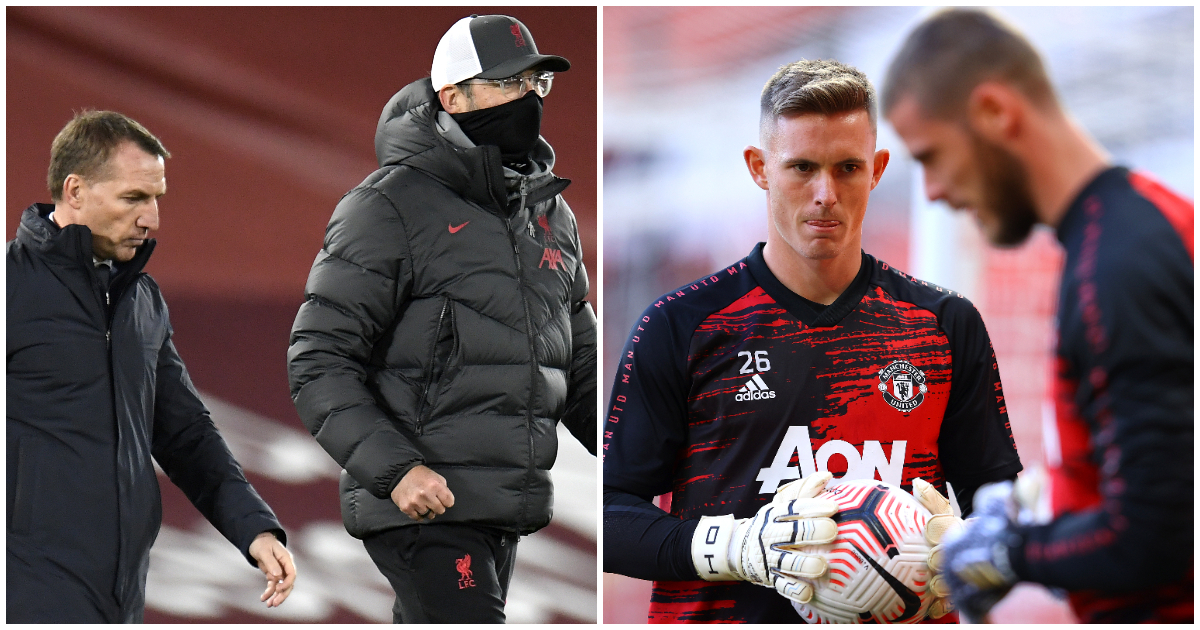 Game to watch – Leicester v Liverpool
Having lost their last three and drawn the previous two, Liverpool will just be glad to get away from home this weekend. But waiting for them in Leicester is Brendan Rodgers and he’s never looked so justifiably smug.

Leicester host the Reds looking to put six points between themselves and their manager’s former employer. Rodgers will doubtless be the vision of humility and bonhomie when he welcomes his successor on Saturday lunchtime, but you can bet the Foxes boss is absolutely loving the contrasting narratives around the two sides and he will be gasping to pile on Jurgen Klopp’s current woes.

Jamie Vardy will be champing at the bit too. The Foxes striker is set to line up against either a midfielder or a Premier League debutant in the centre of Liverpool’s defence. Klopp has never hidden his admiration for Vardy but having been terrorised by the centre-forward through a five-game stretch that saw the wily old Fox snatch seven goals up to 2018, Liverpool have since discovered the formula for keeping him quiet. However, maintaining a five-game scoreless streak will be a big ask if Jordan Henderson has to go toe-to-toe with Vardy, or Ozan Kabak is chucked in at the deep end.

If he could, you would expect Klopp to make changes beyond the centre of his defence in the wake of the 4-1 battering at the hands of Manchester City last Sunday. But the Reds boss has little option other than to play the likes of Alisson, Trent Alexander-Arnold, Thiago Alcantara and Gini Wijnaldum until they stumble upon some form.

Leicester could and probably should be out of Liverpool’s reach this weekend. Because of the Foxes’ recent inconsistency, a much-needed away win would put the champions back in third courtesy of a slight goal difference superiority. But Liverpool could also finish the weekend in sixth. Bad champions indeed.

Manager to watch – Jose Mourinho
Tottenham fans were just happy to feel something other than boredom and detachment when they were knocked out of the FA Cup on Wednesday night. But Mourinho will have been rather less satisfied with scoring four goals while still leaving Everton with his pants around his ankles.

We can only hope that Spurs fans made the most of that all too brief feeling of exhilaration because Mourinho takes his confidence-stripped side to Manchester City, who also scored four on Merseyside this week.

But for City, it earned them their 14th of 15 straight wins as Pep Guardiola begins to pull off over the horizon.

We can only imagine the ways in which Mourinho is planning to park his bus across Pep’s parade. The Spurs boss is fast running out of players not named Harry, Son or Pierre who he can trust and it seems certain that no-one aside from the first two on that ever-decreasing list will be allowed to stray beyond the halfway line at the Etihad.

Mourinho has already done a number on City this season using those exact tactics. It took them top of the table and the talk was very much of a manager reborn in charge of players just desperate enough to follow their leader. But that was back in November. The novelty has gone and the Mourinho death spiral is in full effect. The only question now, seemingly, is who and what he takes with him.

Henderson stayed with United in the summer, and again in January, under the illusion that his chance to stake a claim to the No.1 spot would come. Starting the season with De Gea in the sticks was the right call by Ole Gunnar Solskjaer and initially it seemed like some stern competition was doing the Spaniard some good. But De Gea has been sloppy of late – as evidenced here even before he cost United two points last weekend.

His first mistake was the kind of technical error that any No.1 can make. Keepers occasionally make clumsy parries. But his second error, in the dying stages, was far more damning. With the ball, and the game, there for the taking, De Gea clammed up and braced for impact, allowing Dominic Calvert-Lewin to claim a draw for Everton.

Regardless, change was coming in midweek, with Henderson rota-ed on duty for the cup clash with West Ham. Having kept his sheet clean against the Hammers, the England keeper will be entitled to expect to keep the gloves at The Hawthorns.

If Solskjaer keeps faith again with De Gea, then Henderson will feel that he’s been fed horsesh*t since returning to Old Trafford from Sheffield United last summer.

Team to watch – Arsenal
We know what Leeds will be about at the Emirates on Sunday afternoon. What the hell are we to expect from Arsenal?

The Gunners were resurgent at the turn of the year but Mikel Arteta’s side have slipped back into some of their old habits in recent weeks. After beating Southampton at St Mary’s they then looked scared to do the same to Manchester United. That was followed by self-sabotage at Wolves before being turned over by Villa on Sunday.

Inconsistency is somewhat inevitable from a squad finding their way like Arteta’s. But where they looked fresh and reinvigorated with the injection of youth around Christmas, they have started to look a little laboured once more.

In contrast, Leeds are having a swell old time. And the party will continue throughout the remainder of the season while they hover in mid-table with little to worry about other than running very fast in every possible direction.

But Arsenal need something more tangible from the rest of their season. The Gunners can climb into the top half, above Leeds, if they beat Marcelo Bielsa’s men without Thomas Partey and Kieran Tierney. Defeat could see them slip to 14th, undoing much of their recent good work.

Football League game to watch – Blackburn v Preston
Forest facing Bournemouth on Saturday lunchtime is perhaps the weekend’s most intriguing Championship game for anyone beyond the Lancashire boundary. But the City Ground meeting clashes with Leicester v Liverpool. So instead, your EFL fix comes in the form of Rovers versus North End on Friday night.

This will be the 100th Lancashire league derby between these founder members of the Football League. Blackburn are eyeing a play-off spot and could go to within three points of Bournemouth with a game in hand. But Neil Warnock is Tony Mowbray’s initial target. As one of three sides within a point of seventh-placed Boro, Rovers could be in the top six before Saturday afternoon.

Alternatively, North End could rein them in if Alex Neil’s side can reverse their recent form. And Preston are out for revenge having been humped 3-0 by Rovers at Deepdale earlier this season.

European game to watch – Inter Milan v Lazio
It’s third versus sixth in Serie A on Saturday night, when Juventus take on Napoli looking to continue their run of 2-0 victories while turning the screw on the Milan clubs. AC Milan’s home clash with 16th-placed Spezia follows immediately after, with second-placed Inter hosting Lazio as an alternative to Everton v Fulham as your weekend finale.

Antonio Conte flipped the bird at the Old Lady in midweek – literally – and the Inter boss is seething from Juventus knocking his side out of the Coppa Italia at the semi-final stage. But Conte still reckons Inter have ‘regained credibility’ and they are ‘frightening’ Juve.

Out of the cup and with no European distractions, Inter can concentrate on their Scudetto challenge. Though Lazio pose a stern test, which Inter appear to recognise.

Simone Inzaghi’s side have won six on the bounce to ascend up the Serie A table. If Napoli do them a favour on Saturday, Lazio could leapfrog Juve on Sunday.