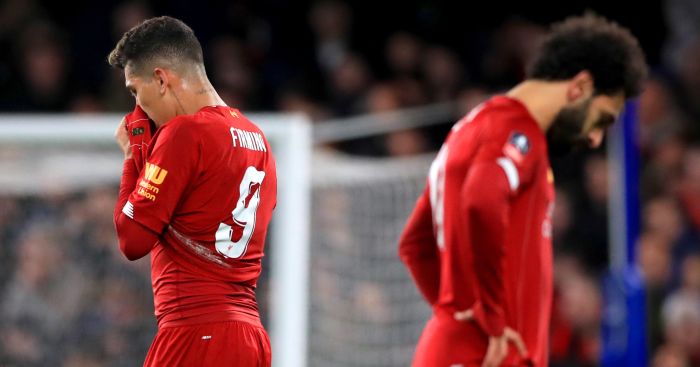 Game to watch: Liverpool v Chelsea
If Chelsea were running a little faster, jumping a little higher and kicking a little harder (legs, balls, whatever) on Sunday night at Wembley, it was probably because they had not long learned of Leicester’s entirely on-brand collapse against Tottenham, leaving the Blues one point clear of a team in free-fall, with at least fourth place all-but secured with a 63-point total that would have earned them seventh last season.

But while there are undoubtedly many anti-climactic ways for Chelsea to claim a Champions League place for next season, the dream scenario is that they win at Anfield, end Liverpool’s three-year-plus unbeaten run there and secure themselves a top-four place with a game to spare, giving them a chance to rest players before the FA Cup final clash with Arsenal. And the icing on top of that delicious cake would be Liverpool being awarded the Premier League trophy in an empty stadium after a galling defeat.

Would Liverpool care? It’s safe to say that Jurgen Klopp would. Having seen his team lose twice since the re-start and throw away the chance to force themselves into the history books, losing that home record would surely sting. And it would quite rightly worry any manager wondering how he will re-motivate players who will have precious little time to recover before the slog begins again.

Managers to watch: Hayden Mullins/Troy Deeney
Hayden Mullins is the man in charge but we have already been told that Troy Deeney will be given the responsibility of providing inspiration ahead of clashes with Manchester City and Arsenal, the first of which comes on Tuesday. What do you say to a Watford side that lost 8-0 in their last meeting with City? What do you say to representatives of any club that has lost 12 straight games to the same opposition and conceded 44 goals in the process?

Maybe ‘don’t get twatted’ will be enough as Watford have a three-goal as well as a three-point advantage over Aston Villa and Bournemouth. Right now that is basically worth another point, which could be vital as both of their relegation rivals are facing potentially winnable games on the final day. Alternatively, claim a point and the Cherries will go down; claim all three and survival will be assured, making instant heroes of Mullins, Deeney and the Watford hierarchy who consistently make bizarre but successful decisions.

So think big. Or maybe just ‘don’t get twatted’.

Team to watch: Manchester United
The thing about resting players and changing formations in the FA Cup to save players for the Premier League is that you then pile an awful lot of pressure on that Premier League clash. Anthony Martial, Paul Pogba and Mason Greenwood will return to the starting line-up but will now be surrounded by players scarred from that Wembley humbling. David De Gea, Harry Maguire and Victor Lindelof were all at least partially culpable for defeat and must now rouse themselves again three days later to face a West Ham side that has already beaten them once this season (as ridiculous as it seems that Manuel Pellegrini was a Premier League manager this actual season).

United have the safety net of Sunday; even defeat to West Ham will keep Champions League qualification in their hands, but a two or three-goal dismissal of West Ham would leave Leicester needing to beat them soundly, which feels some way beyond Leicester right now.

This Manchester United side has had so much smoke blown up its arse that we have felt the need to remind you that they are still fifth and still in danger of a disastrous season of no silverware and no Champions League qualification. Moving into fourth on Wednesday night would be a step further forward than that one place would suggest. Once there, it would be on Leicester to remove them.

Player to watch: David Luiz
Whether astonishingly bad or astonishingly good, he is always worth watching. In theory, Aston Villa should be a cakewalk after Liverpool and Manchester City, but Luiz usually has no truck with such theory.

Football League game to watch: All of them
Two of five to go down and join Hull in League One. One of three to go up and join Leeds United in the Premier League. Swansea in with a chance of overhauling Cardiff or even Nottingham Forest and finishing in the play-offs. And add in Wigan and Sheffield Wednesday wondering how much cushion they might need in the event of a points deduction. Wednesday night could be epic.

European game to watch: Udinese v Juventus
Because there have been 34 goals in eight Juventus games since the restart and what else are you going to do at 6pm on a Thursday? We’re a bit annoyed there are no Premier League games to be honest.