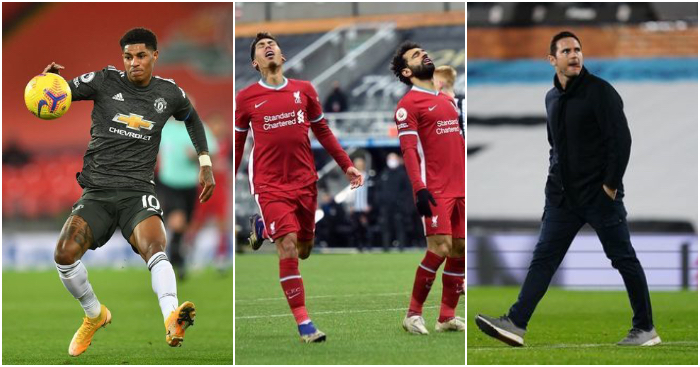 Frank Lampard is under serious pressure. But he’s not the only one…

Game to watch – Manchester City v Aston Villa
Since Aston Villa’s first team last played, Manchester City have secured their place in the final of the League Cup, beaten Birmingham in the FA Cup, moved from eighth to second in the Premier League, scored 13 goals and conceded one, are now arguably favourites to win all of those competitions and John Stones is not only a defensive rock but a goalscoring machine. Three weeks in football is longer now than it’s ever been.

But what will the effect of those three weeks have been on Villa?

Dean Smith has said “some have had symptoms, some haven’t” and that “the hardest part is they all come back at different stages”. By the sounds of it, not all in time for City on Wednesday.

But they have had time to regroup after their defeat to United on New Year’s Day, those that haven’t been suffering have had a chance to rest and Smith admits it’s given him some “time for reflection”.

But City – at the moment – look close to their dismissive best. Villa will be given no time to get back up to speed.

Manager to watch – Frank Lampard
“I thought Mason’s performance all-round was fantastic,” Lampard said. “He’s been very, very good for us, this year and last year.”

It was no surprise Lampard was gushing after Mount’s winner against Fulham. Firstly, because Mount was again superb, but also because it felt like the midfielder had just saved his manager’s job. Whether reports of Chelsea’s talks with replacements are true or not, Lampard must also have felt it.

He knows the atmosphere better than anyone. He knows what is required and that this is simply not good enough. The problem is, what is this? What’s the plan? Where’s the progress? He talks about time and “big elements”, but things haven’t improved with time and if there were tactical principles worked on in training between Man City and Fulham, they really weren’t obvious.

Lampard may lead Chelsea to glory if given the opportunity to do so, like Klopp at Liverpool. But that’s irrelevant – that’s Liverpool and this is Chelsea. High-profile managers come in, win trophies immediately, are sacked if they don’t and are sacked when they do.

Changing that ethos is fine, but there’s no evidence that Chelsea were ever willing to accept short-term pain for long-term gain. They were perfectly happy with their prosperous short-termism. Why wouldn’t they be? And Lampard has consistently stated his awareness of the need for silverware. Does he think that glory is close? Surely not.

He needs a performance and a win on Tuesday at Leicester. Both look unlikely right now.

Team to watch – Liverpool
The last time Liverpool failed to score in three consecutive Premier League games was in March 2005 when Milan Baros and Fernando Morientes led the line under Rafael Benitez. That was not a prolific team: they had scored just 41 goals in 29 games, just four more than Jurgen Klopp’s side have managed in 18 games so far this season.

This side is prolific – they remain the league’s top scorers. The much-vaunted front three have scored more goals this season (24) than they had managed at the same stage last season (22) and only Sadio Mane has scored fewer (9:6).

But Jamie Carragher claims it’s those forwards that have “really let Liverpool down” recently.

In the three goalless outings, Liverpool have had 45 shots, but just eight on target. Roberto Firmino was particularly culpable of profligacy on Sunday, with Carragher – after one of a few fluffed opportunities – insisting “he’s just not a great striker of the ball”. Quite an incredible (and fair) statement to make about one of the Premier League’s most lauded ‘strikers’.

Yes, he’s a hugely influential and beautiful footballer, but when you’re getting in the positions to score goals and you’re not, then you are more of a hindrance than a help. Unfortunately the solution, the man who would have buried at least one of those chances and would definitely be starting against Burnley on Thursday – Diogo Jota – is still out. Another blank and Klopp must surely have a rethink.

Player to watch – Marcus Rashford
Rashford was trending after United’s draw with Liverpool. It was the usual garbage from people suggesting he needs to ‘make a choice between football and charity’, as though thinking about Frubes and half a red pepper means he can’t time his runs properly.

There’s no doubt his ability as a footballer has helped him to sway the government into feeding children (which is a ridiculous sentence), but to suggest feeding children makes him a worse footballer is baseless. It could, just like playing on the Playstation too much could. But it’s just as likely to make him better at football, like any distraction could make anyone better or worse at anything.

He didn’t have a great game, but neither did Bruno Fernandes or Anthony Martial, and Paul Pogba missed the best chance to win it. The point is, Rashford is different, he now has to be good or there’s a carrot stick to beat him with.

He will look to add to his tally of 14 goals against Fulham on Wednesday; let’s just hope he’s as focused as five-goal Martial undoubtedly will be.

Football League game to watch – Derby v Bournemouth
Wayne Rooney’s first game after it was officially announced he was taking full-time charge of Derby didn’t go to plan. They lost 1-0 for the seventh time this season against relegation rivals Rotherham. That’s obviously a concern – with them sitting 23rd in the table – but also suggests they’re a goalscorer away from a far better position.

Ahh, the irony. The greatest Manchester United and England goalscorer of all time, who was playing for Derby – admittedly not really scoring goals – has now retired and is in desperate need of a goalscorer. They’ve conceded 25 goals this season, the twelfth best record in the division, but they’ve scored the fewest – just 14 in 23 games.

They won’t be easy to come by against Jack Wilshere’s Bournemouth on Tuesday.

European game to watch – RB Leipzig v Union Berlin
Union Berlin are the story of the Bundesliga season so far. Having finished 11th in their first ever top-flight campaign in 2019-20, they now sit fifth, having beaten Borussia Dortmund and Bayer Leverkusen and drawing with Bayern Munich.

They face the only other team above them in the league – RB Leipzig – on Wednesday.