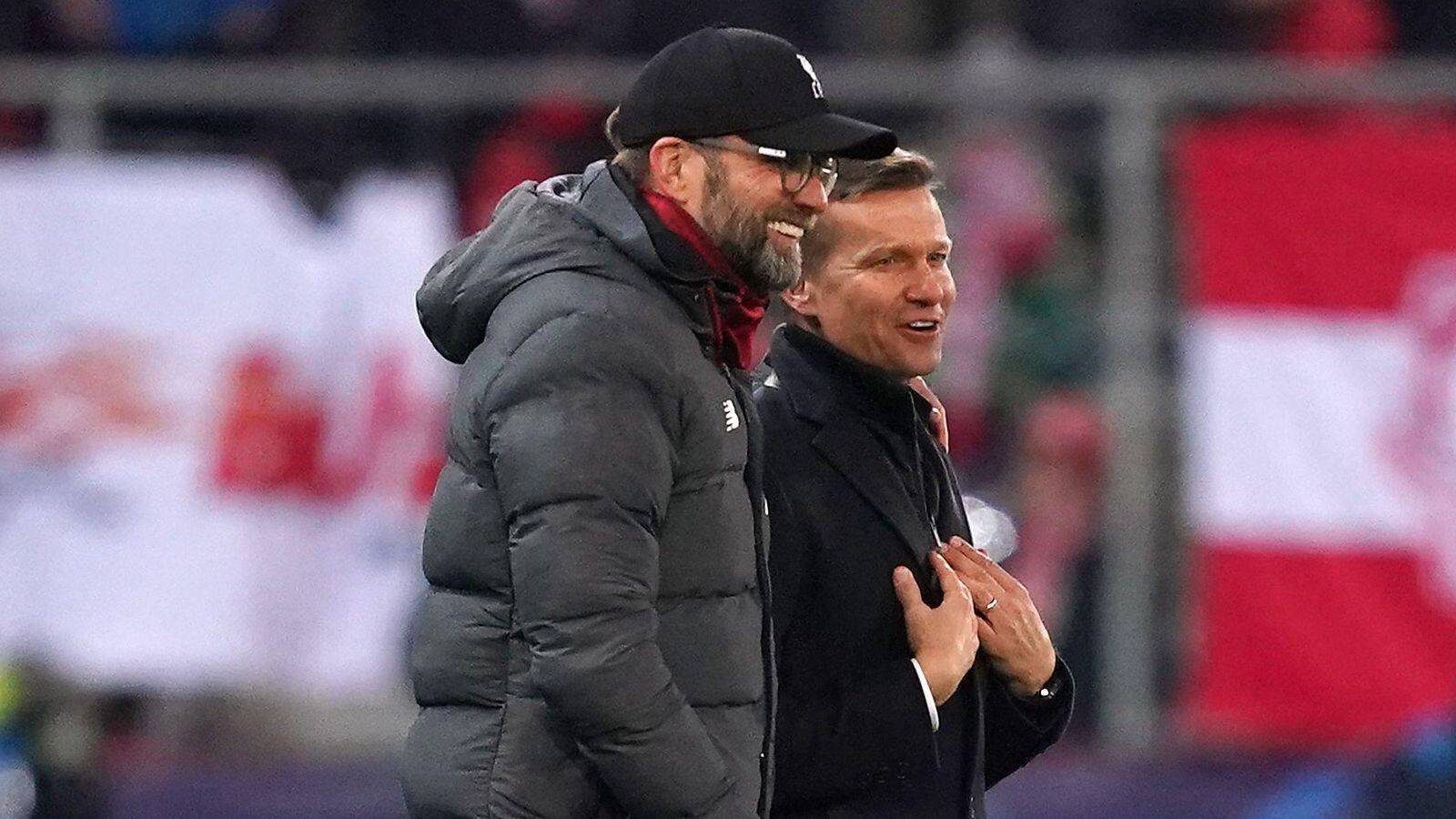 Game to watch – Liverpool v Leeds
It promises to be quite the weekend for referee Michael Oliver, assistants Stuart Burt and Simon Bennett and fourth official Craig Pawson. They will need to prepare itself for the full force of a touchline which will host both Jurgen Klopp and Jesse Marsch.

Beyond a paltry £30,000 fine, Klopp will face no further repercussions for his animated protestations against Manchester City. Leeds and Marsch might consider that to be something of a double standard, considering the American’s £10,000 sanction for his behaviour at Brentford was accompanied by a one-game ban.

Both managers were shown a red card for their behaviour but while the FA made reference to the “language” Marsch used in their statement, no such thing was cited when it came to Liverpool manager Klopp.

So they will be free to prowl the Anfield sidelines in unison, bellowing their team on and calmly making their opinions known on any refereeing decision.

There is certainly pressure on the two managers, which perhaps partially explains their recent conduct. Klopp keeps scrambling for the answer to myriad Liverpool questions. Consecutive 1-0 wins over Manchester City and West Ham, preceded by a thrashing of Rangers, teased a breakthrough. But defeat to Nottingham Forest sent them back to square one.

Another change of system, approach and mentality in a fine win at Ajax could yet be another false dawn or a genuine new beginning.

Marsch will not benefit from much more of the same time and patience. The scintillating victory over Chelsea in August was supposed to signal the true arrival of a team in his image but Leeds have not won since and have slid into the relegation zone.

Considering Liverpool and Leeds have played out games ending in scorelines of 6-0, 4-3, 3-0 and 1-1 since the latter returned to the Premier League two years ago, entertainment should not be in short supply on the pitch – nor in the respective dugouts.

Player to watch – Jamie Vardy
“You can’t keep a good man down. He’s a top pro, a top player, a Premier League legend. He’s a world-class striker. I can’t speak highly enough of him,” said James Maddison, predicting that goals would “come like buses now” for Jamie Vardy after his drought ended against Wolves.

The 35-year-old had gone 11 league games without scoring – his longest such run since March 2015 – before tapping in Timothy Castagne’s cross to secure three important points at Molineux. His half-hour cameo also included an assist, of which weirdly only Kevin de Bruyne, Alex Iwobi and Bernardo Silva have more this season.

Pep Guardiola will be tearing his hair out at the timing of this potential run of form. Not only with regards to Leicester, who have kept consecutive clean sheets while winning two and drawing one of their last three games. But of Vardy, who the Manchester City boss deems to be “one of the best strikers I’ve ever seen” in terms of movement, intensity and finishing.

And the Spaniard knows that Vardy relishes the grand occasion. The three opponents he has scored against most often in his career are Arsenal (11 goals), Liverpool (10) and Manchester City (9). He has two hat-tricks against Guardiola’s side and this fixture does tend to encourage attacking productivity: their last 16 meetings have produced 5-2, 4-2 and 3-1 wins for Leicester and 6-3, 5-1 and 3-1 victories for Manchester City. And Brendan definitely wants some of Erling.

Managers to watch – Roberto de Zerbi and Graham Potter
In a Premier League table comprised of results since Chelsea appointed Graham Potter as manager, the Blues sit unbeaten and with the best defensive record in fourth, while only three clubs have scored fewer goals than Brighton, who are only kept off the bottom by Leeds.

In a Premier League table comprised of results before Chelsea appointed Graham Potter as manager, the Blues sat 6th, having conceded more goals than they had scored, while only Wolves had conceded fewer goals than Brighton, who were only kept off the top by Arsenal, Manchester City and Tottenham.

It is a swing which reflects remarkably well on Potter, who makes his first return to a former home he did not always see eye to eye with but who ought to ultimately welcome him warmly.

That shift in momentum also betrays how the Seagulls are yet to truly spread their wings under Roberto de Zerbi. Chairman Tony Bloom believed that the manager’s “style and tactical approach will suit our existing squad superbly” and deputy chairman Paul Barber described “the only person we spoke to” for the gig as “the ideal cultural and technical fit for Brighton”.

They have won every game under De Zerbi, bar the trip to Manchester City, on xG without actually winning any of said games, and two of their players are among the most prominent in the Premier League for such wastage, so fair play.

But this is crunch time. Either De Zerbi gets his first victory in five or Potter reaches 10 games unbeaten. It is a match both managers and teams will be more desperate than usual to win.

Team to watch – Arsenal
Mikel Arteta stressed the need to “reset” after Arsenal lost for the first time in 10 games after an “extremely poor” defeat to PSV in the Europa League. But it was less the result and more the performance and a creeping trend which alarmed the manager.

“There have been periods recently when we have been excellent and others when we have suffered,” Arteta said post-match. “We’ve not had the consistency for 95 minutes that we want. We didn’t have the threat and aggression we’ve been playing at and that is worrying. The moment something went wrong we just went down and didn’t know how to react.

“It’s my responsibility to get the best from the players. They have been exceptionally good and playing at a level that probably no-one expected. Now it’s down to me to get the best out of them.”

There are mitigating factors: Arsenal have already played 16 matches so far this season and half of those fixtures have been in a breathless October, while this post-Liverpool malaise has coincided with a run of four away games out of five.

But Arteta won’t settle for that as a full explanation and there will be a demand for improvement at home to Nottingham Forest on Sunday. Steve Cooper’s side has found a vague groove and they already proved in January they can beat the Gunners – although the subsequent churn from both mean the teams will be unrecognisable from that FA Cup tie.

That will likely be Arteta’s hope; Arsenal are starting to ever so slightly resemble the team that was faintly out of step and able to be startled by more committed Championship opposition almost a year ago. That tide will need to be turned again.

Football League game to watch – West Brom v Sheffield United
Carlos Corberan couldn’t have picked his first game as West Brom manager more wisely. A fanbase and squad galvanised in that post-Bruce glow, up bright and early as the Saturday lunchtime kick-off at home to an out-of-form pre-season promotion rival offers the perfect opportunity to underline the past and point to the future.

Sheffield United are indeed struggling, drawing and losing three games each of their last six. But Paul Heckingbottom’s side had built up a substantial enough head of steam to remain in 5th.

The Baggies side Corberan inherits are in straits far more dire. West Brom are 23rd, have won twice in 16 games and were in desperate need of a reboot. The Spaniard outlined a desire “to make these first steps immediately” in his opening gambit as manager but he will want the actions of his players to speak louder than his words.