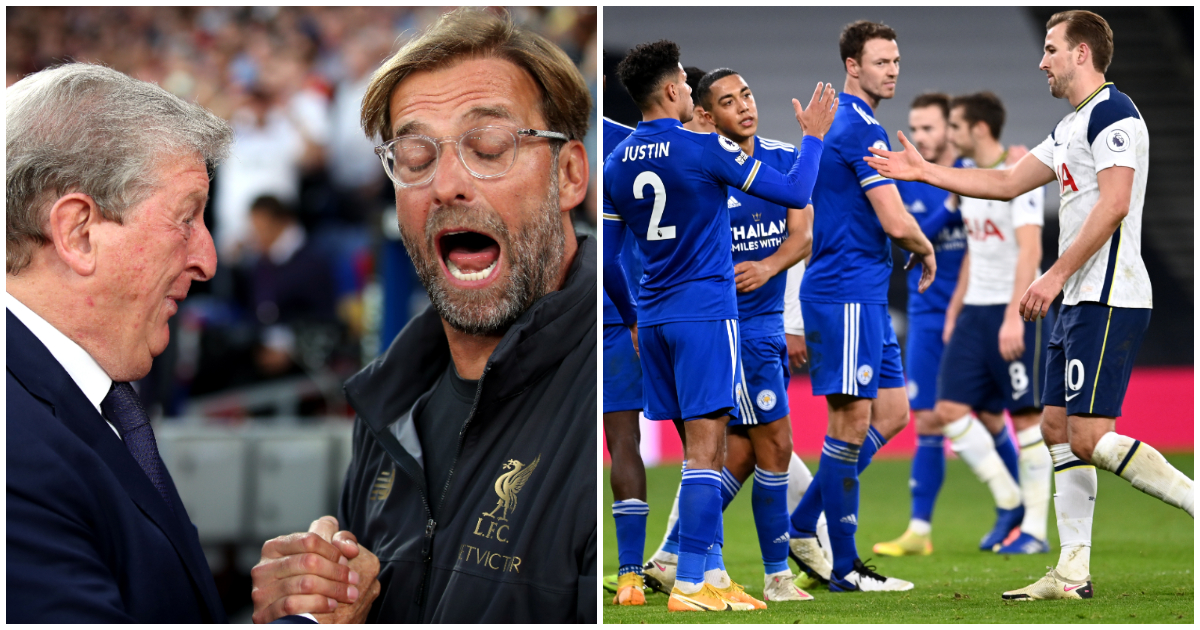 Game to watch – Liverpool v Crystal Palace
Even after all the misfortune and self-sabotage, Liverpool’s destiny is in their own hands. A win over Crystal Palace at Anfield will secure fourth spot unless Leicester, level with the Reds on points but four goals inferior on goal difference, do a madness against Tottenham.

Whether you agree with Jurgen Klopp that finishing fourth would be one of his “greatest achievements ever”, there is no denying that Liverpool have rediscovered form at the perfect time. Almost title-winning form, too. Seven wins and two draws in the nine games since they looked down and out in eighth after the miserable defeat at home to Fulham in March has seen Klopp’s men claw back a 10-point deficit to Leicester.

So they won’t blow it now, will they? Not against a Palace team littered with players leaving the club this summer, one with little to play for?

Unless the Eagles are motivated to wave off Roy Hodgson on a high. The Palace boss takes charge of his final game against his former club, one where you will hear little positive said about the 73-year-old. Hodgson may be a decent fella but he would enjoy few things more than screwing over his old employer again in his last game.

But Hodgson has lost all six matches against Liverpool as Palace boss and hasn’t enjoyed a victory over his former employer for nine years. You wouldn’t have bet against the Liverpool of three months ago f**king this up; now in front of 10,000 supporters at Anfield, they will surely end a ‘depressing’ season on a high.

Teams to watch – Leicester and Chelsea
The consensus among Leicester fans seems to be that their first FA Cup triumph trumps a top-four finish. Which is handy, because it seems likely that the Foxes will miss out once more on a place in the Champions League.

Regardless of what happened at Wembley last Saturday, another final-day failure will sting Brendan Rodgers. Leicester have been in the top four for 68 of their last matches yet here they are again, staring down the barrel of the Europa League instead.

Unless someone does them a favour. We know Palace don’t appear likely, but perhaps Aston Villa might help them out.

Villa host Chelsea with the visitors juggling expectations. They banished their cup final blues by taking revenge of a sort on Leicester at Stamford Bridge on Tuesday, but that will count for little if they don’t finish the job at Villa Park. And not too far towards the back of their minds must be the Champions League final six days later.

Villa are anchored in 11th place but that didn’t stop them turning Tottenham over on Wednesday. And in front of 10,000 fans at Villa Park, Dean Smith’s side will want to end a positive season on a high.

Leicester have to do their job at home to Spurs but as they wait for a faller at the final fence, maybe the stumble will come from the Blues rather than the Reds.

Manager to watch – Mikel Arteta
From Daniel Storey’s midweek Winners and Losers: Over the last 23 games – more than 60% of the season – Arsenal are second in the Premier League behind Manchester City.

Arsenal. This Arsenal. The second-best team in the country over the last five months.

You can decide whether that says more about them or everyone else once you’ve picked yourself up off the floor. But it does suggest that Arteta is constructing something at Arsenal ahead of an intensive phase of that build this summer.

As they prepare to host Brighton, a European place – of a kind – remains in Arsenal’s grasp, as does the opportunity to finish above Tottenham. Everton also stand between the Gunners and a Europa Conference League berth but simply bettering Spurs’ result will see supposedly the worst Arsenal team in years still shadow over their neighbours.

Player to watch – Harry Kane
When you put Arsenal and Tottenham’s fortunes into that context, you can see why Kane wants away from Spurs. If it wasn’t already abundantly clear…

All eyes were on the England striker on Wednesday when he saluted every corner of White Hart Lane after the dismal defeat to Villa. Every move will again be studied for clues as to his thinking, but Kane still has business to take care of this season before his future becomes his focus.

Kane is tied with Mo Salah on 22 goals in the race for the Golden Boot. Both are looking for their third top scorer gong. Salah seems better placed to add to his tally on the final day with Liverpool hosting Palace. Against a Leicester side in dire need of a win, Kane will have to put the frenzy over his future to one side and make the most of what chances he gets to claim his first Golden Boot since 2017.

Football League games to watch – Play-off semi-finals second legs
On Friday night, Blackpool just need to avoid a catastrophe to seal their place in the League One final before Saturday brings Sunderland’s attempt to overturn a two-goal deficit to Lincoln at the Stadium of Light.

The Championship semis, also on Saturday, are most delicately balanced with Swansea going back to the Liberty Stadium with a lead over Barnsley and Bournemouth defending a narrow advantage at Brentford.

In League Two, Newport have a two-goal cushion when they go to Forest Green Rovers, while Morecambe have a 2-1 advantage at home to Tranmere. Both second legs are on Sunday either side of the Premier League’s final day.

European game to watch – La Liga and Ligue 1 title deciders
The Premier League title race may have been run ages ago but the battles for supremacy in France and Spain go to the final day this weekend.

On Saturday, Real Madrid will attempt to pip Atletico Madrid at the post with Real at home to Villarreal, themselves in a battle for Europe ahead of the Europa League final, at the same time as Diego Simeone takes his leaders to Real Valladolid, who need a win and other results to go their way to avoid relegation.

On Sunday, in France, the Ligue 1 title race, the fight for the final Champions League place and the relegation battle will all be decided on the final day.

PSG are left hoping that Lille suffer the jitters once more after the leaders’ 0-0 draw against St Etienne last weekend. That, and PSG’s win, leaves Lille just a point ahead of Mauricio Pochettino’s men. Lille go to Angers; PSG are at Brest.