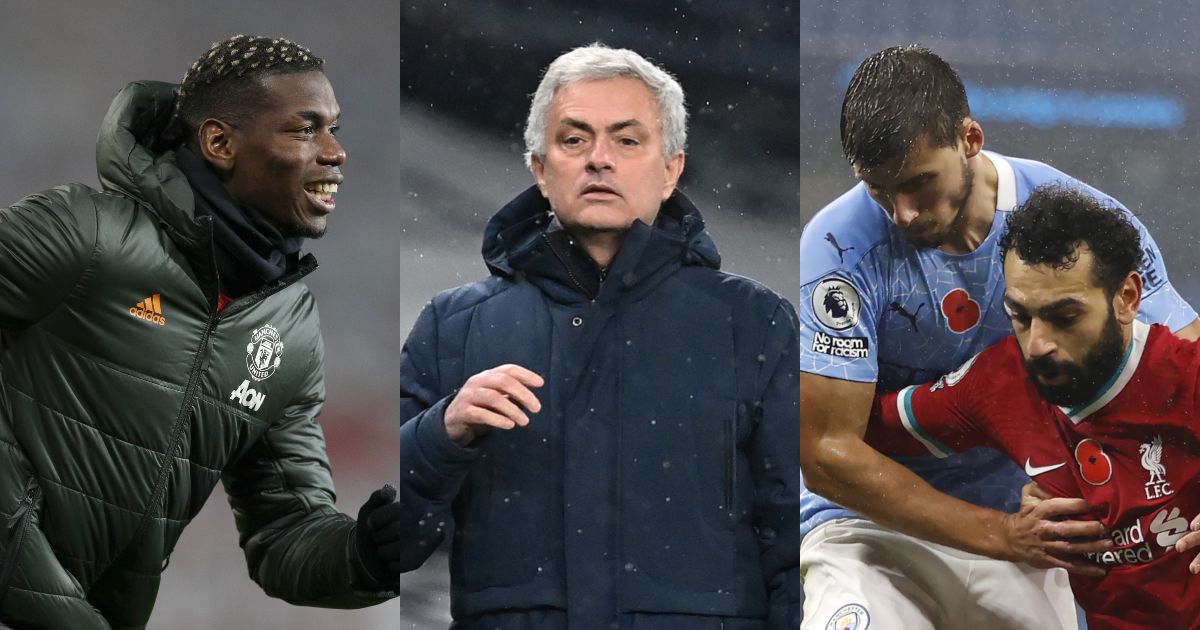 Paul Pogba and Jose Mourinho are both in Big Weekend like it’s 2017. But the headline game can only ever be Liverpool v Manchester City.

Game to watch – Liverpool v Manchester City
When Manchester City hosted Liverpool in early January 2019, Pep Guardiola’s side was third and trailed the Premier League leaders and champions elect by seven points after 20 games. They won 2-1 at the Etihad before embarking on their subsequent march to a successful title defence.

Two years later, Liverpool are fourth and seven points behind City after 22 games, although the league leaders have a match in hand. The transformative events of two years ago ought to give Jurgen Klopp hope of a revival, even if qualifying for the Champions League has become the immediate objective.

This is simultaneously the best and worst opponent they could have hoped to face after a second consecutive home defeat. Burnley and Brighton exposed Liverpool’s burgeoning inability to impose themselves against lesser teams. They have seven points from as many games against the current bottom six this season, compared to 15 points from seven games versus the other sides in the top seven. City will play more into their hands in terms of not sitting deep and hitting on the counter, but they are in imperious form.

Unlucky for some though it may be, 13 is both the number of Premier League games City have gone unbeaten, as well as the length of the club-record run of victories they have put together in all competitions. Since the insipid defeat to Tottenham in November, they have conceded four goals. Since the drab draw with Manchester United a month later, they have scored 34. This might not be as good as they have ever been under Guardiola, but it is certainly their most balanced and stable iteration of the Spaniard’s regime.

Even in the midst of their struggle for form and consistency towards the start of the season, City had enough to draw against Liverpool and miss a Kevin de Bruyne penalty. The Belgian will be conspicuous by his absence at Anfield, even if a number of players have shown themselves capable of stepping up in his stead.

Those who do the same for Liverpool seem to hurt and sideline themselves in the process. Alisson, Fabinho and Sadio Mane could all return to ease the pressure but there will be a decision to make as to who starts at centre-half now Klopp has options to choose from. In the form and mood City are in, it really might not matter. They will relish the opportunity to take another runner out of this title race.

Player to watch – Paul Pogba, probably
What changes do you make to a team that has just won 9-0? Ole Gunnar Solskjaer will provide the latest answer when Manchester United host Everton on Saturday evening.

Perhaps Eric Bailly comes in for Victor Lindelof to counteract the aerial threat of Dominic Calvert-Lewin and Ricarlison? Paul Pogba sat out the midweek mauling so common sense suggests he comes back in fresh and firing, but for whom? And with Edinson Cavani an injury doubt, Anthony Martial may get the opportunity to build on a promising substitute showing.

It will be interesting to see what Solskjaer does with the right side of his attack, a position that will be charged not only with creating chances but also stopping Lucas Digne having too much of an impact. That could be the key battle and whichever fighter is picked at Old Trafford could settle it.

Pogba started there against Liverpool to good effect, helping restrict Andy Robertson and missing a late chance himself to seal victory. Solskjaer might be tempted to go for a repeat. And then there is Mason Greenwood, who managed to provide only one assist in the Southampton thrashing, although his displays of late have been an improvement.

The safest and thus most likely bet does seem to be Pogba. Hell, bet you can’t remember who started on the right for United in the 3-1 win over Everton in November? Juan bloody Mata!

Manager to watch – Jose Mourinho
Only once before has Jose Mourinho lost three consecutive league matches throughout his entire career. A month later, he was sacked. There might genuinely be many Tottenham fans out there who would accept defeat at home to West Brom if they were guaranteed that final outcome.

It was in late 2015 when Mourinho looked this utterly inept. Chelsea had been beaten 2-1 at West Ham before returning to Stamford Bridge to hand Jurgen Klopp his first win as Liverpool manager. By the time the Blues visited Stoke, the Portuguese was serving a one-match stadium ban and missed Marko Arnautovic scoring the only goal in a home win.

The reason Chelsea technical director Michael Emenalo gave for sacking “the individual” by December was “palpable discord”. Mourinho had lost his players then as he and they drifted a point above the relegation zone. Things are not nearly as bad at Tottenham but they sure are playing like a team threatened by relegation.

Mourinho found time in between questioning the referee’s performance, lamenting the absence of “a good Dele Alli that we didn’t have yet but hope that we can have in the future” and bemoaning a lack of “confidence” to suggest that he at least saw one positive in the second half against Chelsea.

“Togetherness is very easy to show when you’re on a high and winning matches, when everything is amazing,” Mourinho said. “But in difficult moments it’s more difficult to see that togetherness but I saw that in the second half. No doubts for me.”

So he might not be throwing every player under the bus just yet but Mourinho cannot possibly wish to get away with parking it against West Brom. Tottenham have to take the initiative and dominate at home to a team that has conceded at least 14 goals more than any other side this season. Try blaming injuries when you let Sam Allardyce keep his first clean sheet as a manager since April 2018.

Team to watch – Southampton
The good news is that Ralph Hasenhuttl and his players have been here before. They know how to react. They will be top of the Premier League within 13 months and this will all be forgotten until someone gets sent off after two minutes of a game they go on to lose 9-0 in March 2022 and the cycle continues.

The response, it should be said, was not immediate when Leicester thrashed them at St Mary’s in 2019. Not in terms of results anyway. Southampton lost their next two league matches to Manchester City and Everton, but their performances were considerably better, as low a bar as that is to clear.

Hasenhuttl and his players used it then to draw a line in the sand. “After this, no more talking from us, no more messages. The time for that is over,” he said when examining that flaming post-Leicester wreckage. “Our only focus is working towards Manchester City. This is where we must direct our entire energy, and this is what we owe to our fans.”

At least this time they have a slightly gentler fixture to play themselves back into form and confidence. It was away at Manchester City after Leicester. It is at home to Newcastle this time. Phew.

Football League game to watch – Swansea v Norwich
Daniel Farke was “not dancing on the table” after Norwich were held to a second successive goalless draw by Millwall in midweek, but his side continue to gyrate atop the Championship. Their lead over second-placed Brentford has been reduced to four points, the Bees harbouring a game in hand. Swansea lurk a place and a point further behind.

Not since December 16 have Steve Cooper’s side tasted defeat themselves, ensuring another tight but engrossing game for Norwich when they visit south Wales on Friday evening.

It was Farke’s side who emerged victorious between the two in November, a game settled only by Marco Stiepermann’s 84th-minute strike at Carrow Road. This should be more of the same between two equally excellent sides and exemplary coaches.

As Cooper said in midweek: “It’s got the makings of a good game.”

PSG have recovered since to rise to third and three points behind Lille in defence of their perennial title. Marseille have slipped down to ninth after following up a six-game winning streak with one victory in their last nine matches.

But it is the identity of the two men in the dugout that is so different. The nerdy vegetarian that once patrolled PSG’s touchline has made way for Mauricio Pochettino, who claimed the first trophy of his managerial career against Marseille in last month’s Trophée des Champions before being predictably and hilariously told that it wasn’t proper silverware and he was still a bottle merchant.

The man he faced in that Tottenham philosophy final has long gone, too. Andre Villas-Boas wasn’t all that happy about signings being made without his say so and thus tendered a resignation that was rejected to facilitate his sacking instead.

Nasser Larguet, head of the club’s youth academy, took charge of the disappointing 2-2 with Lens in midweek and will presumably reprise that role, with reports suggesting Jorge Sampaoli will be installed as permanent manager by the weekend. How he would relish walking into a side that has just recorded its first league double over PSG since 2010.