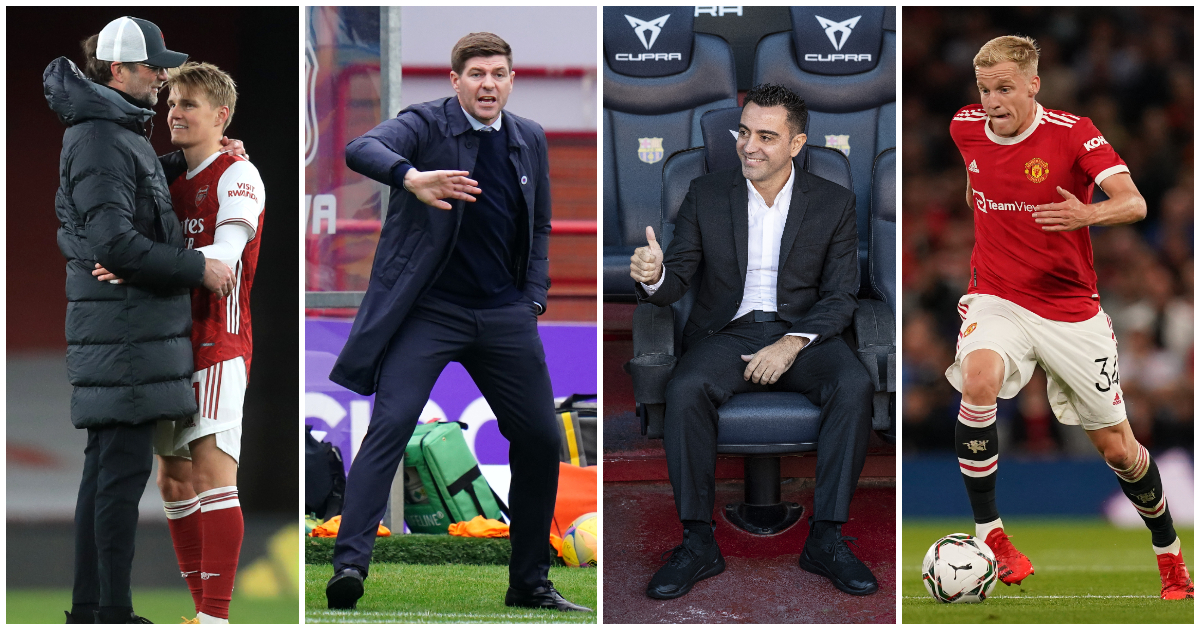 Steven Gerrard is among three new bosses in the Premier League this weekend, while Xavi starts with a closer Barcelona derby than usual.

Game to watch – Liverpool v Arsenal
Are we on the verge of a mini crisis at Liverpool?

Defeat to Arsenal at Anfield on Saturday evening would see the Gunners leapfrog their hosts in Premier League table – a prospect that seemed unthinkable when Liverpool started the season on fire while Mikel Arteta was clinging on to his job.

But Liverpool’s current issues appear to play directly into Arsenal’s hands. Jurgen Klopp still has a nagging headache in one position, with his midfield struggling to create for the front three (they are quite capable of helping themselves, fortunately) but, more worryingly, failing to adequately protect the back four.

Despite a dreadful start, Arsenal have shown themselves to be adept at playing through lines, with Emile Smith Rowe, Bukayo Saka and Martin Odegaard set to see more of the ball than they might have expected at Anfield, unless Klopp has stumbled upon a solution to his biggest problem through the international break.

He can’t say he wasn’t warned. Brighton and West Ham penetrated Klopp’s engine room with ease in Liverpool’s last two Premier League matches, with both Graham Potter and David Moyes employing a similar 4-2-3-1 formation to the one Arteta seems to have settled upon. That said, Ole Gunnar Solskjaer’s 4-2-3-1 didn’t seem to bother Liverpool all that much.

The fact Solskjaer’s United could feasibly finish the weekend a win off Liverpool in the table is troubling enough but more concerning is the possibility of slipping to fifth and possibly seven points off Chelsea. Klopp was in a stinking mood after the defeat at West Ham which he has had to stew on for a fortnight while his players disappeared all over the world on international duty.

We could see Liverpool respond in style and we know they usually relish facing Arsenal. But the Gunners will travel to Anfield more confident than they have been for some time. Whatever happens, it should be a thriller.

Solskjaer and United are reeling from their derby-day humiliation, which came not a fortnight after Liverpool left Old Trafford with the Red Devils’ dignity.

Let’s see how Solskjaer responds this time. Since many of his players have been away for the last couple of weeks, major structural change isn’t possible, though we would know not to expect that even if Solskjaer had all his players on the grass every day since their most recent embarrassment.

So we can expect little more than a few personnel changes and, one would hope, some realignment of their focus. One of those changes could see Van de Beek given an extremely rare opportunity to stake a claim for a place in Solskjaer’s XI.

The long and loud appreciation for Van de Beek in the second half of the derby was the closest you will get to witnessing open dissent towards Solskjaer from the Stretford End. The manager knows he’s f**ked as soon as he loses the support of the match-going supporters so it would be no surprise whatsoever to see the Dutchman thrown in for his first Premier League start of the season.

Van de Beek couldn’t do any worse than Fred. This is his woefully belated opportunity to show why Solskjaer has been wrong to keep him restrained to the bench for all these months. Or, if he remains in chains, it’s the final nail in the coffin of his weird Old Trafford career.

Manager to watch – Steven Gerrard
Three managers will be perching their backsides on new benches in the Premier League this weekend, with Dean Smith getting his feet under the table at Norwich when they take on Southampton at the same time Eddie Howe will introduce himself to 55,000 adoring Geordies.

The Canaries and Magpies are entrenched in the bottom three while Villa are flirting with the drop zone far harder than they ought to be. The quest to get a tune out of a talented group of Villans starts for Gerrard on Saturday afternoon when Brighton go to Villa Park.

The international break has deprived Gerrard of much time to implement widespread changes in the wake of Smith’s departure, but his immediate priority must be to tighten up his new side. Norwich and Newcastle are the only sides to concede more goals, with Smith’s intent to put Villa on the front foot often leaving the back door ajar.

One positive for Gerrard is we know these Villa players can do better. Newcastle and Norwich’s defenders may simply have found their level but we have seen Tyrone Mings and Matt Targett can perform at a higher level than they have shown this season, while there is more to come from Axel Tuanzebe. There has to be.

The same goes in attack for new signings Emi Buendia and Leon Bailey. Gerrard will need more than a couple of pre-match training sessions to stamp his mark on this Villa team, but the new-manager bounce might be enough to see some of these Villa players suddenly buck up their ideas.

Team to watch – Newcastle
Gerrard’s primary task is to get Villa playing to their potential but Howe needs more than just the short-term shot in the arm that a new face in the dugout can provide. The Newcastle manager needs his new-but-stale squad to start overachieving – and quick – before he can get some new faces through the door in January.

Between now and then, Howe has nine games to keep Newcastle in with a shout of survival, beginning with Brentford on Saturday. Then before January come rather more tricky assignments against Liverpool, Arsenal, Leicester and Manchesters City and United.

Graeme Jones used his three games in caretaker charge to stiffen up the Magpies defence, which is in dire need of a more drastic overhaul. But until that can be achieved, Howe has to find a way to build on the small improvements Jones made, with Palace and Brighton both coming up against a more resolute rearguard than they might have had Steve Bruce remained in charge.

“At Bournemouth, we always tried to be on the front foot, play brave football, play attacking football and I’m not going to come here and suddenly be a different manager,” Howe said in his opening press conference and in Allan Saint-Maximin and Callum Wilson, he has some of the players to attack with verve and excitement. But the new manager doesn’t yet have the base to build the foundations upon. His first match in charge will offer the first hints over how Howe might find that balance between playing the football his reputation was forged upon while making Newcastle tight enough to stay competitive in the short term.

European game to watch – Barcelona v Espanyol
Xavi is another manager taking charge for the first time on Saturday, even if he is back on familiar territory at the Nou Camp. His Barcelona reign begins on Saturday night with a home derby clash with Espanyol.

As a player, Xavi loved these derbies. Espanyol are the side against which he enjoyed his most wins (25 in 36 games) and goals (six). But life at Barca is very different these days and Espanyol will make the short trip fancying their chances more than ever before when they’ve encountered Xavi at the Nou Camp.

Indeed, Vicente Moreno will not only fancy his chances of p*ssing on Xavi’s parade on Saturday night; the Espanyol coach is intent on finishing above Barca come May. Barca are ninth, two places above their visitors but both sides sit on the same number of points.

Xavi’s first job is to instil some backbone and provoke some character from a group of players that have caved in too easily too often this term. Any repeat of such flakiness will be seized upon by Espanyol, but the fact that six Barca stars suddenly appear to have recovered from their injuries suggests there is some appetite for the fight.

Elsewhere on the continent this weekend: it’s a biggie in Berlin with Union hosting Hertha in the derby on Saturday evening, while Napoli’s undefeated record faces a stern test against third-placed Inter Milan on Sunday.

EFL game to watch – Derby v Bournemouth
Just the 43 points separating bottom-placed Derby and Championship leaders Bournemouth before the two sides meet on Sunday lunchtime. But their latest points deduction, which leaves the Rams 18 points adrift of safety, perhaps allows Wayne Rooney and his players some freedom to flourish.

Derby have lost only five of 17 league matches this season, the same number as the sides placed fourth to seventh, and though Rooney’s Rams have drawn more games than anyone else in the division, the prospect of a remarkable survival fight is not entirely beyond the realms of possibility.

Until that becomes either impossible or a realistic ambition, in the meantime, Derby can go into matches like Sunday’s with little pressure. Which may make them a more dangerous foe.

Should Bournemouth slip up, fourth-placed Coventry are one of the sides looking to catch up, with the Sky Blues on the box at Sheffield United on Saturday lunchtime.