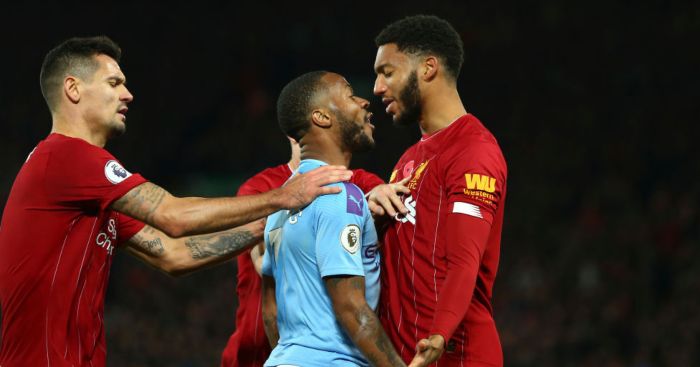 Man City v Liverpool offers the prospect of Kevin de Bruyne clapping Andy Lonergan onto a silent Etihad pitch and we love it.

Game to watch – Man City v Liverpool
Jurgen Klopp is too reverent and otherwise does not have enough of a valid excuse to mimic one of Sir Alex Ferguson’s finest examples of utmost humour on Thursday.

The year was 2007. The date was May 9. The venue was Stamford Bridge. The scene was phenomenal. John Terry was forced to lead his second-placed Chelsea side in a guard of honour for the team that had deposed them as Premier League champions. But instead of Ryan Giggs, Paul Scholes, Cristiano Ronaldo and Wayne Rooney, it was Tomasz Kuszczak, Kieran Lee, Chris Eagles and Dong Fanghuo who were honoured.

Sir Alex Ferguson really made Chelsea give these players a guard of honour. The greatest manager to ever do it. pic.twitter.com/mMYdqI4qi0

The official excuse for such a weakened line-up was an FA Cup final between the two teams ten days later. Klopp has no such ulterior motive so do not expect for Kevin de Bruyne to be applauding Andy Lonergan at a silent Etihad.

But it will make for perversely fascinating viewing, a delectable appetiser to what could be an exquisite main course. Liverpool have rediscovered their harmony with the consummate ease of an established community choir, while Manchester City are as capable of the divine as they are the disastrous.

The daunting nine-point gap Liverpool opened up with that victory in November is now an insurmountable 23. Yet City cannot consider this a no-win situation. They might not be able to cross the finish line first this season but they can at least lay down a marker and send out a reminder of their threat ahead of the next.

Klopp has, after all, won four of his last seven games against Guardiola, with only the Community Shield penalty shoot-out defeat and 2-1 loss on his last Etihad visit ending in City’s favour. That balance has to be addressed soon.

Player to watch – Marcus Rashford
The footballer to have had the greatest short and long-term impact over the last few months has yet to fully translate that to the pitch. Marcus Rashford fed Anthony Martial against Sheffield United as effectively as he did the unprivileged youth of an entire nation, but would undeniably savour a feast of his own.

He has not wanted for chances – two of the highest calibre were wasted when the Blades were otherwise put to the sword. But that finishing touch exhibited in his final Premier League game before the pause has not returned.

The back injury Rashford suffered at the turn of the year means those goals at home to Norwich on January 11 represent his most recent. And that is fine: his high standard of general play should protect his starting place.

Ole Gunnar Solskjaer’s threat that no-one has “a divine right to be playing every game” sounds more empty than veiled, but Rashford must still take it on board. More than anything, he himself will be expecting better against Brighton.

“The most difficult thing for us was to match their energy.”

In retrospect, that might have been the admission that changed the course of Tottenham’s history. They had lost and drawn games before, been edged out, thrashed and everything in between. But for Mauricio Pochettino to concede defeat in terms of replicating another team’s work ethic felt pivotal.

Sheffield United have transformed since then, never mind Tottenham. There were shoots of promise against Arsenal but a three-month lay-off seems to have affected Chris Wilder and his players more than any other team and manager.

Tottenham have certainly benefited. A run of six games without victory before the break was the sort that cost Pochettino his position in November, culminating in that draw at home to Sheffield United. A draw and a win against Manchester United and West Ham respectively represent tentative steps forward that must turn into more of a stride when they visit the Blades. A show of energy is the lowest bar to clear at Bramall Lane.

Team to watch – Bournemouth
Time is running out for Eddie Howe and Bournemouth. They are three goals removed the relative safety of West Ham in 17th, with Aston Villa (19th) and Watford (16th) separated by a single point.

Brighton’s renaissance makes it likely that the two clubs joining Norwich in dropping to the second tier will come from that quartet of teams struggling to keep their heads above the parapet. The Seagulls are by no means in the clear but the fallibility and feebleness of their relegation rivals makes a five-point gap seem unassailable.

Bournemouth must therefore simply concentrate on doing marginally more than the clubs directly above and beneath them, to do just enough to survive in the top flight. Introspection will be painful and necessary at the end of the season but they would much prefer to analyse a live specimen instead of conducting an awkward post-mortem on a Championship-bound corpse.

To that end, the Cherries must get something against Newcastle. It is the last game they go into ostensibly as favourites, which even then is probably overplaying home advantage and overlooking the excellent job Steve Bruce has done in the north east.

But after Newcastle comes Manchester United (a), Tottenham (h), Leicester (h), Manchester City (a), Southampton (h) and Everton (a). Lose on Wednesday and it might be all over. A draw might not even be enough.

Football League game to watch – Preston v Derby
The promotion narrative is undeniably the most compelling of any in the Championship currently, save for the first chapter of Middlesbrough’s inevitable and eventual Premier League rise under Neil Warnock.

While the fight to finish in the automatic places has generated the most drama of late, Leeds, West Brom, Brentford, Nottingham Forest and Fulham will be overshadowed in midweek by a loser leaves play-off town match at Deepdale.

Both are on 57 points, three behind a resurgent Cardiff in the rush to secure that final play-off spot. A win for either likely knocks the other out of contention. A draw gives the Bluebirds a chance to fly further clear at home to Charlton.

That’s one serious test but we’re on top form so why not?#dcfc 🐏

European game to watch – Barcelona v Atletico Madrid
At what stage do Barcelona simply cut out the middle man and install Lionel Messi as manager? As hilariously childish as him pretending not to hear assistant Eder Sarabia during the drinks break of the draw against Celta Vigo was, it speaks to a certain arrogance perhaps required at the top level.

An influence, too, as stories have since emerged regarding the future of Quique Setien. How surprising that handing your third or fourth choice candidate a two-year deal with a break clause in between has created more problems than it has solved.

So the answer to this question might well be no. Barcelona are two points behind Real Madrid and running out of games to catch a team that has won all five of its games since La Liga resumed. Perhaps the last team anyone would want to face in such a must-win situation is Diego Simeone’s Atletico Madrid, who will either do their bitter city rivals a favour or offer Messi and friends a timely boost.