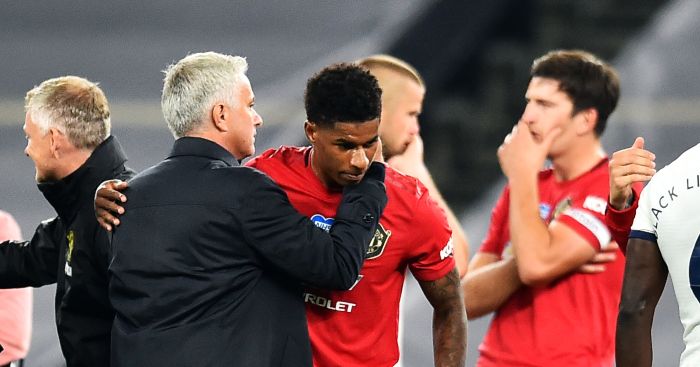 As the sexual tension between Ole Gunnar Solskjaer and Jose Mourinho approaches boiling point and they prepare their rulers to measure goalposts, 18-yard boxes and penises this weekend, it is worth remembering that there should theoretically be a pretty decent game on at Old Trafford on Sunday.

There was nothing to separate Man United and Tottenham when they last met in June, with Steven Bergwijn’s opener cancelled out by a Penno Penpendes penalty to a soundtrack of a spluttering Roy Keane demanding the heads of David de Gea and Harry Maguire.

Since then, both have embarked on late runs of form to secure European qualification, started the new season with defeats and progression to a cup quarter-final, and exposed a pressing need for transfer reinforcements.

Tottenham have heeded a call that Man United have thus far ignored. Jose Mourinho will not view this summer as perfect but a sensible few months reached a ludicrously fun crescendo with two signings from Real Madrid and the impending arrival of Harry Kane’s latest understudy.

Man United, meanwhile, have wasted so much time pursuing Jadon Sancho that holes have either appeared or become even more obvious throughout their spine. They need to upgrade in central defence, midfield and up front, never mind just on the right wing.

So this game, while ostensibly between two members of the elite, will instead feature two flawed teams, both under managers with much to prove, with the loser likely consigned to at least a week of crisis talk.

There will be better games to watch this weekend than this potential dull-fest. But none have quite so much at stake. At the very least, the fallout should be compelling.

Sorry to interrupt, but why read Big Weekend like a huge nerd when you could watch and listen to it like a real Chad?

Goodison Park will host one of those matches which ought to be more of a treat for the neutral. Everton v Brighton could be special.

It has all the necessary ingredients: two evolving clubs clearly on the right track; a pair of talented and likeable managers; an aggregate Premier League score of 9-6 which points to the probability of goals; and an undeniable quality running through each team that almost ensures entertainment.

James Rodriguez, Lucas Digne, Leandro Trossard and Tariq Lamptey will jostle for the spotlight but there is every chance that Dominic Calvert-Lewin will time his run, evade his marker and crash another one-touch finish straight into our hearts and minds.

A place in the England squad, and the subsequent four substitute minutes against Wales, Belgium and Denmark that are sure to follow behind that egocentric Harry Kane fella, was just reward for the 23-year-old’s scintillating start. A hat-trick of consecutive home hat-tricks will be his next target.

Perhaps it would be foolish to bet against it. Brighton, as excellent as they have been, have kept three clean sheets in their last ten Premier League games – two against Newcastle and one at Norwich. They have shipped at least three goals to Liverpool, Manchester City, Chelsea and twice to Man United in that time, and Everton might consider themselves just as capable as the last two teams of punishing an opponent. Calvert-Lewin absolutely will.

A genuinely intriguing weekend of Premier League football offers about 15 different main courses, the juiciest of which takes place at Elland Road on Saturday evening. Leeds and Manchester City could put on quite the show.

It might be that the reality of Marcelo Bielsa taking on Pep Guardiola in the Premier League cannot possibly live up to the enticing expectation. They have met each other thrice before, including the latter’s final game in charge of Barcelona, with the former yet to experience victory over the manager whose career he helped sculpt almost a decade and a half ago.

The mutual respect between two men is unbreakable, forged in 2006 over an Argentinean barbecue and a love for the sport. It was there that Bielsa questioned the motives of Guardiola – not yet retired as a player – for seeking to become a coach. “Do you really like blood that much?” the Leeds boss asked.

He will demand his players spill it once more against the wounded animal of City. Leeds could be the worst possible opponents for a team lacking confidence: unsettling, relentless, determined. The challenge could also invigorate them.

Regardless of the result and performances, Bielsa and Guardiola will remain reverent. But for 90 minutes these comrades will become enemies once more.

At least one of the Premier League’s four perfect records will fall this weekend. Everton and Leicester face varying degrees of jeopardy at home to Brighton and West Ham respectively but neither Aston Villa nor Liverpool should have reason to fear the other.

While both try to recover from the devastation of exiting the League Cup in midweek, Sunday’s game will be a welcome distraction and Villa Park will provide a suitable arena. The hosts need not wince at the prospect.

They have enjoyed perhaps the best transfer window of any Premier League side, ruthlessly improving across the starting XI and refining their squad options. As much as Sheffield United and Fulham – 19th and 20th respectively – have made for a congenial start, Villa deserve credit for making such light work of them.

So this will be the challenge, and a proper evaluation of their quality. The result is far from immaterial but it feels as though the performance will be far more instructive as a guide to what Villa can expect from this season.

Seven teams remain unbeaten in the Championship, from a Bristol City team top on alphabetical order to Millwall down in ninth. Reading and Watford will hope to maintain their fine runs of form at the Madejski Stadium on Saturday.

Reading were expected by many to struggle after replacing the steady Mark Bowen with unknown quantity Veljko Paunovic in August. Yet the Royals have beaten two pre-season promotion candidates in Derby and Cardiff, as well as Barnsley, to establish an early lead through the inspiration of Lucas Joao.

Watford similarly traded native experience for continental flair in the form of Vladimir Ivic and the result has been uncharacteristically stable. A pair of 1-0 wins over Middlesbrough and Luton have sandwiched a goalless draw at Sheffield Wednesday.

Two sides who have thus far shown no weaknesses and only flashes of their potential strengths should relish the opportunity to make a statement.

It is Juventus against Napoli. Or as one of the managers involved would have it: Nutella against shit. Do tune in.