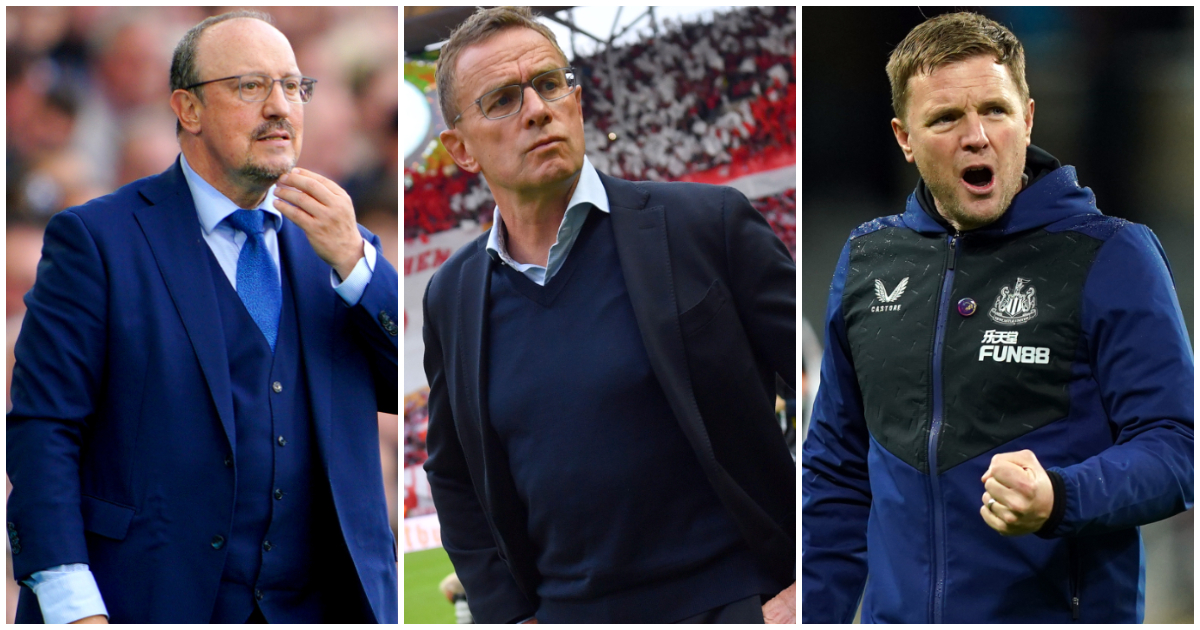 Ralf Rangnick gets to work at Man Utd on Sunday. Perhaps Newcastle will have won a football match by then, while it’s must-win for Rafa too.

Game to watch – Newcastle v Burnley
It was must-win for Newcastle on Tuesday. They did not win. So Saturday’s visit of another bottom-three dweller becomes mega-must-win for Eddie Howe.

It’s been more than six months since Newcastle last won a competitive game of football. That includes 15 matches of the current season, which leaves them bottom of the table and the only club without victory in the Premier League and EFL.

Still, though, Newcastle fans are drunk on the euphoria of their takeover and the prospect of a far brighter future. That, however, seems further and further away with each week that passes as the Magpies remain rooted in the relegation zone.

Defeat to Burnley on Saturday will leave them six points adrift of safety. January cannot come soon enough – we know that – but every game that goes by with a zero in the W column makes the task of attracting the right players to Tyneside, and consequently securing survival, all the more difficult.

St James’ Park was loud and proud on Tuesday night when their ten men battled to a point against Norwich. But there is only so far that noise will take what is a desperately limited group of players. Howe has to find a way to turn all the goodwill and positive vibes into something tangible to use in the fight against relegation.

Sean Dyche will be hoping that Burnley can seize upon the Newcastle vulnerabilities that both Brentford and Norwich failed to. The Clarets are the opposite of Newcastle: resolute at the back; devoid of creativity in attack, beyond Maxwel Cornet. Whichever side can best overcome their greatest flaw will land a huge blow in the fight for survival.

Newcastle 1-1 Burnley kicks off at 3pm on Saturday.

The new United boss will officially take charge for the first time, though he will surely have had some influence on the draw at Chelsea and Thursday night’s win over Arsenal. But with United now his squad to do with as he wishes, it will be fascinating to get the first insight into what we might expect from the Red Devils over the next six months.

Such are the contrasts between this United side and the ideals of their new manager, it makes it so difficult to predict how this will all pan out. Maybe all this squad needed was an expert pointer here and there, but the suspicion remains that these players are lacking more than just a bit guidance.

Across the board, they need to buck up their ideas and a new manager should give them the motivation to do that – though many of these players have seen a few through the door at Old Trafford and in the long-term, it’s yet to make a huge difference.

How quickly will Rangnick attempt to stamp his mark on United? To make the changes you expect the German to want to implement, it would usually be a long-term project. But at Old Trafford, as it stands, he only has six months so he best get a wriggle on.

Player to watch – Declan Rice
The West Ham midfielder has been playing all season like a man with a point to prove. And it is one he will be keen to ram home on Saturday lunchtime.

Rice will come up against the club that released him as an academy player, the same side among two or three considering whether to spend an outrageous amount of money on the midfielder next year.

Rice was beyond the means of Chelsea, Manchester United and Manchester City last summer, but with all three looking to strengthen their engine rooms, they are unlikely to find a better man for the job than the England star, as long he maintains his current form.

The 22-year-old has stepped up a level or two even since the summer, when he teamed up with Kalvin Phillips to screen Gareth Southgate’s defence. David Moyes wanted more of an attacking threat from Rice, who has responded by proving himself with three goals and as many assists to be one of the few top-class box-to-boxers around.

He showed that to Pep Guardiola when he was excellent against Manchester City last week. Rice will perhaps be even more motivated to put on a show for Thomas Tuchel.

Team to watch – Everton
Rafael Benitez survived the demolition derby on Wednesday night, but another defeat at home to Arsenal on Monday night will surely do for the under-fire manager.

Especially if the Toffees kick-off in 16th place – all Leeds and Southampton would need is a point apiece – or even 17th if Watford pull off a shock win over Manchester City. To be one or even two places above the relegation zone is simply not good enough.

Benitez has some mitigation. The problems at Everton extend way beyond his remit. The owners and director of football Marcel Brands have plenty of questions to answer, but no appetite to face them if the decision to hold the club’s AGM online is any indication.

Then there are the injuries Everton have had to cope with. Losing Dominic Calvert-Lewin early in the season is a blow from which they haven’t recovered. In his absence, Everton have been impotent in attack.

They have been pretty toothless all over the field. Everton have caved in too often, especially during this latest run that has seen them claim only one of the last 21 points available.

Now the leaks from the dressing room have begun, it is hard to envisage a way that Rafa recovers from this, especially with so little goodwill to call upon because of his links with Liverpool.

The last thing he needs is Arsenal pulling up outside a ground that does ‘angry’ better than almost any other.

Only one point separates the hosts from Bayern, who have had by far the better of these recent meetings. The Bavarians have won the last six in all competitions and the last three at the Westfalenstadion.

So Erling Haaland has timed his return to fitness and form perfectly as he prepares to go toe-toe with Robert Lewandowski once more. Dortmund, too, have been on the up of late, having won six of their last season in the Bundesliga, even while they have tumbled out of the Champions League.

One disappointment in the build-up: Dortmund have cancelled the 67,000 tickets for Saturday’s meeting while they wait to see what reduced capacity might be permissible amid rising Covid rates in Germany. In Bavaria, Bayern have already been told that they will play behind closed doors until the situation improves.

EFL game to watch – Fulham v Bournemouth
It’s first versus second in the Championship, too, with pacesetters Fulham looking to hold off Bournemouth, who lag their hosts by only a point.

Benjamin Bloom has you covered for a full tactical preview of where top spot will be retained or gained at Craven Cottage.

We also have Champo Big Weekend for all you EFL pervs.