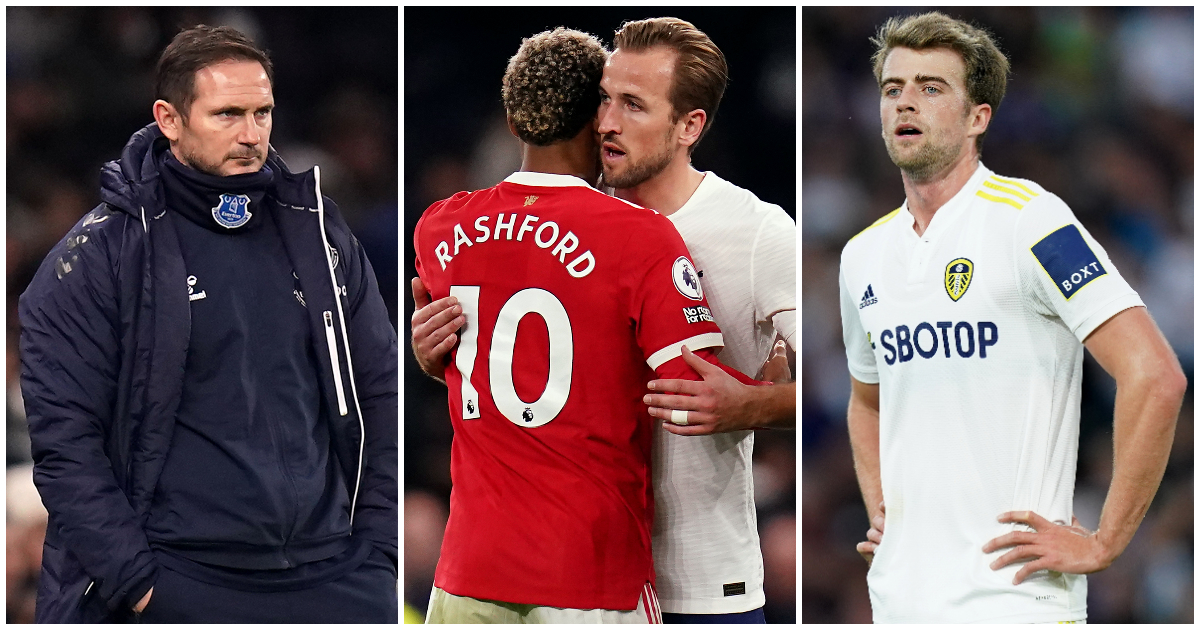 Antonio Conte will relish piling on the misery at Man Utd, while Chelsea play their first home game under licence and Frank Lampard tries to fix Everton’s defence…

Game to watch – Man Utd v Tottenham
The last time these two sides met, back in October in north London, the meeting was dubbed El Sackico. To the loser, his cards. Nuno had his thrust upon him, and Ole Gunnar Solskjaer’s followed not long after what inevitably turned out to be a brief stay of execution.

Their successors haven’t had the best time of it either. Ralf Rangnick replaced Solskjaer on an interim basis in the hope of bringing some structure and a new style to the club. So far, the German hasn’t been able to offer either, though it’s hard to imagine who might have in the circumstances at Old Trafford.

Antonio Conte would doubtless suggest he could but United were never going to appoint a coach with the Italian’s record of speaking truth to power. And when he looked like chucking it in after the defeat at Burnley recently, it appeared the Old Trafford hierarchy had taken an unusually savvy stance.

But Conte has got a tune out of these Tottenham players. The problem is when they pick and choose their moments to perform. Conte will be desperate, for the club and his own ends, to ensure that Spurs go to Old Trafford and play like they did at City or at home to Everton. Not as they did against Burnley, Middlesbrough, Wolves and Saints.

We can be a little more sure of which United turn up. Almost certainly the pea-hearted rabble which has probably prompted Rangnick to wonder why he bothered. The only positive he might conjure up is that Old Trafford is a slightly better environment to work right now than Moscow from where he came.

If United muster up some enthusiasm and summon an ounce of character, they could reignite their top four hopes. Which is what this meeting is all about: Champions League qualification. How Conte would love to repay United for their lack of faith by leaving them in seventh by the end of the weekend.

Team to watch – Chelsea
The Blues are only playing football this weekend because of a special licence granted by the government while their owner’s assets were being frozen. Amid that backdrop, it must be difficult for the players and coaching staff at Chelsea to focus fully on Newcastle’s visit.

They managed just fine on Thursday night at Norwich while the news was still being absorbed and but come Sunday lunchtime, answers over what the government’s announcement means for the Blues individuals will likely still be in short supply. Thomas Tuchel will doubtless urge his players to concentrate on what they can control, but even the manager must be distracted by the fresh doubts placed over his future by the Russia Regulations.

A few weeks ago, Chelsea might not have required complete focus to brush aside Newcastle but the Magpies are a different animal now. With their new overlords, one of whom expressed sympathy for Putin’s pal Roman Abramovich this week, the tide has turned. The Toon can allow themselves to zero in on the teams above them in mid-table rather than worry too much about what’s going on over their shoulder in the relegation dog fight. It’s possible they could be 11th by the end of the weekend.

That’s thanks more to Eddie Howe’s nous than the Saudi cash and the Newcastle boss will be relishing his first clash of 2022 with a Big Six club. At least Chelsea have a cushion in third place between them and the sides who prior to this week had lost the Blues over the horizon, but that could soon disappear, especially if Newcastle expose any insecurities that are certain to have emerged in the Stamford Bridge dressing room.

Manager to watch – Frank Lampard
It’s been a miserable week too for another figure indelibly inked in Chelsea’s history. Though Lampard hasn’t the headspace to worry about what’s going on at his former club right now. He’s too busy scratching around for solutions to Everton’s many shortcomings. Even before he considers what impact their Russian ties might have at Goodison Park…

Lampard’s week will end with the visit of Wolves after it began with a tonking at Tottenham. The Toffees were flattered to lose 5-0, so inept they were in north London.

Mercifully, since Lampard’s three away matches have been lost by an aggregate score of 10-1, Everton are back on home turf on Sunday where they have been slightly more impressive if not much more successful. But patience at Goodison is already shot and with only three points from five games in charge and Everton in their worst Premier League position for a quarter of a century, Lampard is left looking like a man who has just realised he has bitten off more than he can chew and needs to cover his arse.

His priority to avoid finishing the weekend in the bottom three has to be the solidification of a defence that looks barely fit for the Championship. Whether Lampard can achieve that, no one really knows. But the fact he thought he had changed the club’s prospects already hardly inspires confidence that he has the answers to rescue the Toffees from their first relegation in 71 years.

Player to watch – Patrick Bamford
It’s been almost six months since Bamford started a game for Leeds and, prior to Thursday, over three months since we’ve seen him at all in the Premier League, which was one of the main reasons behind Marcelo Bielsa’s demise.

So important is he to Leeds that Bielsa’s replacement Jesse Marsch has been very careful with how he has brought Bamford back from the sidelines. The England striker was named as a substitute at Leicester last week but when Marsch turned to his bench for reinforcements while chasing an equaliser with 15 minutes to go, the new boss didn’t feel confident enough to trust Bamford’s hamstring. So he opted for Tyler Roberts who, typically for Leeds, subsequently knacked his own hamstring.

That defeat at Leicester showed a defensive improvement from Leeds but not at the expense of creating openings. With some better decisions in the final third and more composure with the final pass, United would have been returning north with at least a point.

Thursday’s loss to Villa was a different story. Leeds managed just one shot on target to Villa’s nine, even after Bamford made his return for the last half hour.

Losing to Villa places even greater emphasis on Sunday’s clash with Norwich when Bamford is sure to be back in the XI. Now the striker needs to show just how much Bielsa and Leeds have missed him, even if it is too late for El Loco.

EFL game to watch – Luton v QPR
Three games from the Championship on the box over three days this weekend. West Brom against flying Huddersfield takes place at The Hawthorns on Friday, while leaders Fulham go to second-from-bottom Barnsley on Saturday lunchtime.

Then on Sunday, in our pick of the three, the in-form Hatters host a Rangers side who’ve faded badly in recent weeks.

For all the lowdown on the second tier action this weekend, check out Benjamin Bloom’s Championship Big Weekend.

European game to watch – PSG v Bordeaux
There aren’t many games on the continent this weekend that really demand your attention, but it might be fun to watch PSG in action for the first time since they collapsed so woefully at Real Madrid on Wednesday night.

On paper, they have the best fixture they could hope for to lift their spirits: at home to the club currently bottom of the table. But so calamitous was their surrender in Spain, don’t bet against Bordeaux piling on the misery while PSG’s flops mope about the Parc des Princes.

The PSG fans have already warned the hierarchy that they will vent their feelings on Sunday lunchtime. It would not be the first time this season that the Ultras have demonstrated their disapproval over the running and direction of the club and the midweek defeat will serve only to strengthen those protests.

For almost any other club, you would expect a reaction. But with PSG 13 points clear at the top of Ligue 1 and comfortable enough to wallow in their own misery for a little while longer, their predicament could get worse before it gets better.