As excited as we all are for Manchester City 7-3 Arsenal, the rest of the week looks similarly tasty. 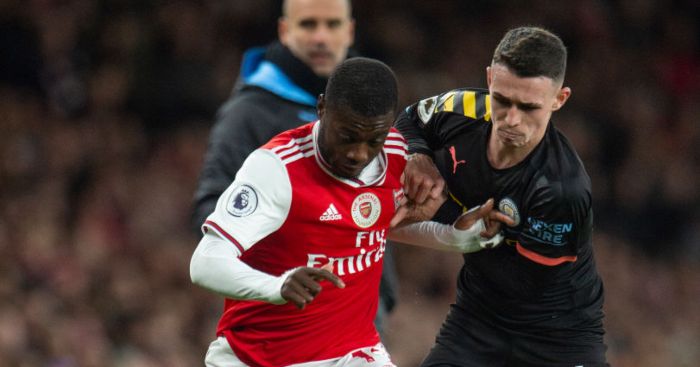 Arsenal losing 7-3 to City should be fun. The Premier League returns but keep your eyes on Messi and Juve.

Game to watch – Manchester City v Arsenal
The wait is almost over. Since Michael Oliver called time on Leicester’s demolition of Aston Villa in March, a Premier League football has neither been caressed in satisfaction nor booted in anger. Pepe Reina’s forlorn goal-kick at the King Power Stadium remains England’s last taste of top-flight football.

The world has transformed in 100 days. Rules, boundaries, statues and lives have been broken. Acts of kindness have become commonplace. True colours have been exposed for better or worse. Loved ones have been born and lost in fear. Some things have been changed temporarily, others indelibly.

This new Premier League normal is an example of the former – measures will alleviate and fans will return eventually – but it will be intriguing nonetheless. What effect will a genuine three-month break have on elite athletes? Can struggling clubs use this as a catalyst? Might previously prospering teams find that their form nosedives? How is a celebration camera different to an ordinary one? Will Jurgen Klopp be able to resist giving everyone a hug?

Wednesday will bring some answers. Manchester City suffered a chastening derby defeat in their final game before the suspension, while Arsenal were nine league matches unbeaten and starting to look up. The gap between the two clubs is 17 points but the current reality is that everyone starts on level footing.

David Luiz might be the world’s greatest defender away from the glare of a crowd. Kevin de Bruyne and Sergio Aguero could similarly thrive on that energy and support. Granit Xhaka may be booed off by the Arsenal bench. And if a shot hits the side netting but no-one is around to first mistakenly celebrate it then scoffingly deride that reaction, is it even vaguely as funny?

Either way, the loudest game’s longest silence is about to be shattered. Whether a distraction, an obsession, a commotion or a profession, football is back. City and Arsenal are as interesting a pairing as anyone could hope for.

Player to watch – Lionel Messi
It is time to add a global pandemic and a questionable clean shave to the exhaustive and exhausting list of things that cannot stop Lionel Messi. He had a hand in three goals against Mallorca to help Barcelona maintain a two-point lead atop of a resumed La Liga.

His deflected stoppage-time strike made history as the Argentinean became the first player to ever score 20 goals or more in 12 consecutive Spanish top-flight seasons: a feat almost as impressive as assisting for Martin Braithwaite.

Feel free to bet on him breaking another record or two on Tuesday evening. Barca host a second-from-bottom Leganes side who lost their first game back to lowly Valladolid. That dodgy virtual crowd should be in for a treat.

Manager to watch – Maurizio Sarri
Not since the 2010/11 season, when Luigi Delneri paid with his job for finishing seventh in Serie A, losing in the Coppa Italia quarter-finals and exiting at the Europa League group stage with six draws, have Juventus gone an entire campaign without winning a trophy.

Maurizio Sarri must have thought he had developed a late appetite for silverware by guiding Chelsea to European glory last summer, but he risks being left with a sour taste in his mouth 12 months on. Juve, top of Serie A by a single point and behind in their Champions League tie against Lyon, scraped into the Coppa Italia final on away goals and must now conquer familiar foes Napoli to ensure at least one new addition to their honours list.

They have beaten Napoli once already this season, 4-3 back in August. Yet marginally more relevant is the 2-1 defeat they suffered at the Stadio San Paolo in January. The Old Lady struggled to cross the road to Wednesday’s final but might find oncoming traffic easier to avoid with a trophy on the line.

Team to watch – Aston Villa
The perfect starter to the delectable main course that will be City 7-3 Arsenal, Aston Villa take on Sheffield United in a game with consequences at either end of the table.

The Blades would move above Manchester United and into a Champions League-reaching fifth with victory in Birmingham. Chris Wilder oversaw a comfortable 2-0 win over Villa in December, with only City and Liverpool beating them since the start of that month.

But the pressure is evident. United have a horrible fixture list, featuring four of the teams currently above them. Failure to win here could be critical.

Wilder knows it. Dissatisfied with the standard of a recent training session, he noted: “‘I don’t think you realise this, but the eyes of the world are going to be on you in about ten days’ time. If you carry on training like you have been today you’re going to completely embarrass yourselves.'”

He is everyone’s dad and it’s amazing.

Villa are one of few clubs with an even tougher run-in. They play four sides in the top six and, two points from safety, have no time to waste. A game in hand would ordinarily represent an advantage but perhaps not for a club that needed this break more than most.

And certainly not for a team that barely laid a glove on their opponents when they last met. If Jack Grealish turns up, they will surely have a chance. Let’s hope he at least wears matching footwear.

European game to watch – Werder Bremen v Bayern Munich
It would be a mistake for Bayern Munich to scan a Bundesliga table and breathe an efficient sigh of relief at the position of their next opponents. Werder Bremen may occupy the penultimate place in an 18-team league but their recent form suggests the runaway leaders are in for a fight on Tuesday.

Only Bayern, Borussia Dortmund and Leipzig have accumulated more points since the restart than Werder, who have been reinvigorated in their fight against relegation. Three of their seven wins this season have come behind closed doors and an impressive Gladbach were held last month.

It would seem unlikely that there would be a repeat of the Philippe Coutinho-inspired 6-1 destruction at the Allianz Arena in December. Then you remember Bayern have won all six of their games since the campaign kicked off again, scoring 19 goals and conceding just five. Best of luck.

Football League game to watch – Colchester v Exeter
Though never a solution that was going to please everyone, the decision to end the League Two season has delivered two fascinating play-off semi-finals. Cheltenham will face Northampton after establishing a 3-2 aggregate lead in their previous two meetings, while Colchester and Exeter lock horns again after a pair of draws in December and January.

The real United and City played each other twice in four winter weeks but could find nothing to separate them. But there must be an overall victor this time around, whether they become apparent on Thursday or emerge during next Monday’s second leg.

In the words of Exeter boss Matt Taylor: “It is going to be strange.” As Colchester manager John McGreal put it: “We’re going into the unknown.” But it’s football, and that’s all that matters. That and the cardboard cutout fans. Hopefully Harold Shipman and Dominic Cummings won’t be making appearances this time.