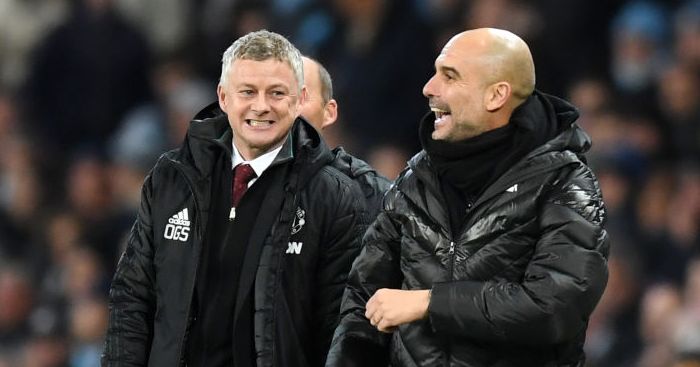 A Manchester derby, a Liverpool CRISIS, Mourinho’s latest excuse and…

Game to watch – Manchester United v Manchester City
The Manchester rivals have already met three times this season with the away side taking the win each time.

The more recent of United’s two victories was little more than a month ago and of no consequence, confirming as it did City’s progression to the Carabao Cup final. That semi-final second leg was followed by City’s very, very, very silly 2-0 defeat to Spurs but they have been far more sensible since then. Five wins in a row, silverware secured, Champions League prospects significantly enhanced (then summarily destroyed), Leicester’s threat quelled, FA Cup progress. City remain very much on track to banter Liverpool right off by once again winning three trophies to their one.

United remain unreliable and unpredictable but already look a far better side for the arrival of Bruno Fernandes and have, in general, been at their best when taking on big teams or Tranmere.

City’s assorted other commitments and league position would leave the Premier League the lowest of their remaining priorities this season even without all that UEFA unpleasantness, and that may yet have an impact on team selection, even at Old Trafford. Kevin De Bruyne is a doubt, while Pep Guardiola has dropped some heavy hints that Phil Foden may get a Premier League chance on a grand stage.

For United, a significant test of their resurgent bid for Champions League football before next week’s potentially definitive clash with stumbling Spurs.

Player to watch – Dominic Calvert-Lewin
The Premier League’s form striker has scored eight goals in ten games since Carlo Ancelotti’s arrival – no player in the division has scored more in that time – and five in his last six league games. He scored twice in a 3-1 win over Chelsea during Big Duncan Ferguson’s entertaining yet brief caretaker spell and his improvement has gone hand in hand with that of his team. Having scored against Arsenal and Manchester United in the last two weeks he has the chance to net against ‘Big Six’ opposition for a third straight week in Sunday’s return fixture against Chelsea.

The improvement is huge. pic.twitter.com/W9rvndDN2E

More success for Calvert-Lewin against the Blues would offer another timely boost to his England prospects while victory for Everton would lift the Toffees to within five points of Chelsea and right back into the tallest dwarf chase for top four/five.

Manager to watch – Jose Mourinho
The traditional three-year Mourinho cycle has been played out on dizzying fast forward in barely three months. We’ve already reached the regrets and recriminations stage years ahead of schedule, while the usual early success and silverware has, at Spurs, been replaced by being quite good for an hour at West Ham.

Team selections are already at the stage where Jose is trying to prove points rather than win them, and he is already insisting Spurs need to focus on either Burnley on Saturday or Leipzig on Tuesday because they cannot possibly do both. Yes, Spurs have a flawed squad and significant injuries, but right now he is gaslighting an entire football club. Spurs should not be this bad, and absolutely should not be this devoid of ambition. Mourinho is outrageously fortunate that Eric Dier’s escapades meant he didn’t have to spend Wednesday night’s press conference explaining why a serial winner such as himself had sent out his side to try – and, worse, fail – to see off the Premier League’s worst team at home by spending 80 minutes defending a 1-0 lead from the edge of their own box.

It’s no surprise that Spurs have tailed off after a three-game winning run; struggling sides often do once they reach the psychological 40-point barrier. But Burnley away is a nightmare fixture for Jose in his current funk. Perhaps the worst possible, given the variables in play.

One, Burnley are a determinedly competent side in very decent form. Yet two, they are not a side where further Mourinho “What other way could we possibly play against such mighty foes?” low-block negativity will be tolerated, partly because three: Spurs absolutely whacked Burnley 5-0 in December. Fourth, for an added bit of fun, Burnley’s 2-1 win on Saturday evening (Spurs having either taken an early lead and failed miserably to hold it or scored a late consolation having decided far too late in the piece to actually try and play some football) will lift the Clarets above Mourinho’s dysfunctional side.

Team to watch – Liverpool
Finally, after absolutely ages of being really, really, really good, Liverpool are in CRISIS. Not Spurs levels of CRISIS, sure, but CRISIS nevertheless. Form is a fickle thing. Liverpool have not responded well to its sudden and baffling absence and, suddenly, a routine home game against Bournemouth is anything but. The title is very much won, but anything other than a comfortable home win against a side in the bottom three and level on points with Watford will send Liverpool in to what is now a season-defining game against Atletico Madrid still bruised and confused.

Football League game to watch – Derby v Blackburn
Wayne Rooney’s Manchester United reunion may not have gone to plan but he has one thing they haven’t got – A GREAT BIG BUSHY BEARD!

After all the focus and attention of Thursday night it’s back slightly below the radar, and behind Sky’s red button, for the day job of trying to push the Rams out of a congested mid-table and into the play-off picture. They are eight points off the pace but still in with a shot given the lack of compelling current form from any of the sides directly above them. Last week’s 3-1 win at Sheffield Wednesday ended Derby’s own four-match winless streak in the league, and now it’s time to get back to winning ways at home. Derby have failed to hold 1-0 second-half leads in their last two Championship games at Pride Park and can ill afford another stalemate against a Blackburn side themselves just three points off sixth despite three straight draws.

European game to watch – Monchengladbach v Borussia Dortmund
Some tasty looking games in Italy this weekend, but all come with bloody great big asterisks and all sorts of “at time of writing” problems that we’re not going to risk getting too involved with right now. They’re already (at time of writing) being played behind closed doors because of the coronavirus with no absolute guarantee (at time of writing) that they will even go ahead at all.

Luckily, and not for the first time, it’s the Bundesliga to the rescue with a belter. Gladbach are still clinging on and making this most excellent of title chases a four-horse affair but realistically will need a win over Dortmund to keep themselves fully in the hunt.

Meanwhile, any Dortmund match provides another opportunity to watch the ridiculous Erling Haaland in action, an opportunity that should always be taken.