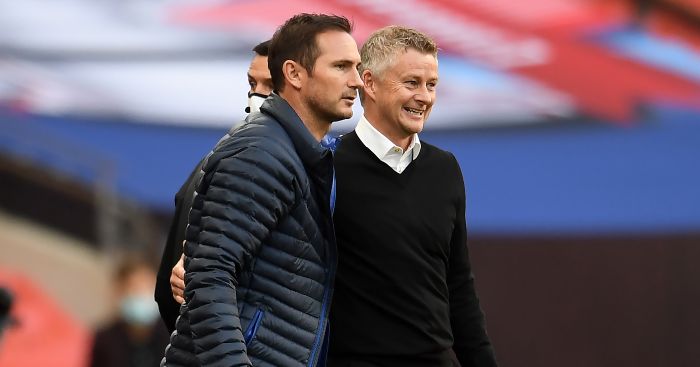 Not since Harry the Hornet riled both Sam Allardyce and Roy Hodgson in the space of two years has a mascot engaged in such fierce battle with a Premier League manager. The accusation often levelled at Ole Gunnar Solskjaer and Frank Lampard is that they fulfil the role of both, albeit leaning a little too far in the favour of the former.

This has not been the best week for that hashtag narrative. Manchester United followed up their eventual dismantling of Newcastle with a genuinely impressive victory in Paris, engineered entirely by the perma-grinning, Nou Camp-corner evoking, Ferguson car park space-vacating P.E teacher that leads them from the sidelines.

Chelsea cannot claim to have had quite as good a few days, first relinquishing two leads to draw at home to Southampton. But a clean sheet accompanied a much more compact, resolute and professional performance against Europa League champions Sevilla at Stamford Bridge. The defensively incontinent, Mason Mount-obsessed serious-point-joke-serious-point merchant who puts the cones out every day and lets Jody Morris sort the rest deserves plenty of credit.

Those are the caricatures of two talented but over-promoted coaches. One will leave Old Trafford on Saturday evening having challenged those harsh perceptions; the other will only reinforce their exaggerated reputation in the eyes of many.

It seems set up to favour Solskjaer. Manchester United beat Chelsea twice in the Premier League last season without conceding: 4-0 at home and 2-0 away. They had the smaller share of possession and fewer shots than the opposition on both occasions, relying on efficient counter-attacks, set-pieces and a tight defensive shape.

But Lampard finally learned not to play into their hands by July. He fought fire with fire in the FA Cup semi-final, trading a position on the perennial front foot for a five-man defence with two deep sitting midfielders and the movement of Willian and Mason Mount causing havoc around a central attacking pivot of Olivier Giroud. They benefited from plenty of fortune but earned a 3-1 victory over Manchester United at Wembley.

So both managers are capable of devising a blueprint for success over the other, yet equally have form for the opposite. Two coaches who seem intrinsically linked could have those ties severed this weekend: the winner might feel like genuine steady progress is being made; the loser will look further out of his depth and in over his head. Draw it is.

“He’s an infectious character. It was a difficult decision for me on Sunday whether to start him or bring him off the bench. He’s had another week’s training so he’s put himself right in the frame to be involved at the weekend and to start as well. He’s really at the forefront of our thinking.”

Chris Wilder added that there would be “no hesitation” to pick Rhian Brewster against former club Liverpool. The 20-year-old will surely make his full Premier League debut at Anfield, just not in the circumstances most expected.

It took courage to leave the comfort zone of English champions for the team that occupied last place in the top flight. Brewster could have stayed on Merseyside and fed off something a little more than scraps – the Champions League use of Xherdan Shaqiri in midweek suggests opportunities would have been more forthcoming this season – but instead he decided to blaze his own trail.

Jurgen Klopp explained that Brewster’s age played a part in his decision to sell him and not be “selfish”. The pathway at Bramall Lane is much clearer, not least because two of his direct rivals for a place as striker are in their 30s, and none are in anything approaching good form.

The Blades have scored a single goal from open play this season and are winless since thrashing Chelsea 3-0 in mid-July, eight games ago. The bar for a £23.5m forward has rarely been so low to clear.

Sheffield United could still do with Brewster making an immediate impact. For all the talk of injuries having threatened Liverpool’s prospects, Wilder has been without his best defender, most creative midfielder and arguably most effective striker for weeks. Few would justifiably argue against his assertion that Jack O’Connell, John Fleck and Lys Mousset are “bigger” cumulative absentees than Virgil van Dijk for Klopp.

Brewster will hope to show Liverpool that they have lost more than an imposing centre-half this month. His quest to prove they made a mistake in letting him go begins where it all failed to start.

There was a mischievous aspect of Carlo Ancelotti ruling James Rodriguez out against Southampton due to “a mistimed tackle with Virgil van Dijk at the beginning” of the Merseyside derby. The Colombian played the full 90 minutes against Liverpool so any problem sustained in the opening stages was only exacerbated by leaving him on for the whole game.

Such a potentially incendiary comment masked the real story: that Everton will be without their talisman on Sunday. Rodriguez has created 15 chances in the Premier League this season, second to Son Heung-min, while Harry Kane and Jack Grealish are the only other players to score at least three goals and provide at least three assists so far.

With Richarlison suspended and Seamus Coleman sidelined with a hamstring problem, this will be a genuine test of Ancelotti’s ingenuity and Everton’s strength in depth. A struggle to adjust would be understandable but a genuine contender for European qualification should be able to sustain three first-team absences without too much of a drop.

Ancelotti pointedly spoke of a need “to put in other players who have the desire to play”. He mentioned Alex Iwobi, Bernard and Anthony Gordon as potential replacements in midweek and while each are obvious downgrades on Rodriguez and Richarlison, this is their opportunity to prove they can play a part.

Jonjoe Kenny is an option to fill in at right-back but whoever is invited into the fold must maintain the incredibly high standards set so far this season. Ancelotti might not expect the same quality from stand-ins but he absolutely will demand the right effort, attitude and application.

Southampton will not make it easy for Everton but this is their chance to dictate general opinion. Cope well with such obvious setbacks and those early-season caveats will soon disappear.

Dean Smith has already raised and surpassed expectations. The ifs and buts that came with successive victories and clean sheets against Fulham and Sheffield United soon made way for the awe of beating Liverpool 7-2, then a quietly impressive 1-0 win at Leicester. A team that can blow opponents away one week and grind out a result against them the next must be taken seriously.

Leeds will be another litmus test. Marcelo Bielsa’s side are yet to win or lose by more than a single goal this season, ending on the right and wrong side of 4-3s and 1-0s, while drawing 1-1 with Citys Hull and Manchester.

They are difficult to beat yet Liverpool and Wolves have proved it possible. If Villa have designs on joining such established excellence then a fifth straight Premier League win on Friday evening would be welcome.

Not that a draw would be a bad result. Smith faced Bielsa twice in Villa’s promotion-winning season, losing 3-2 in second-half stoppage time at Villa Park and drawing 1-1 in that bizarre meeting at Elland Road. No-one should foresee a dominant victory for either side.

But Villa can be expected to set another marker for their progress. They have had a season longer to prepare and develop at this level than Leeds and must make that advantage count if they are to be seriously considered as a top-half side. Pass this test and many would argue their sights should be set even higher.

Hopefully you are sat down, dear reader, for the fact that The Sun’s laughable story has not come to fruition might otherwise have knocked you clean off your feet. Phillip Cocu remains Derby manager and Wayne Rooney a mere player-coach as the Rams struggle through the season.

Six Championship games have produced five defeats, interrupted by that dramatic victory at Norwich. The good news is that a 4-0 loss to Blackburn in September has sparked something of a reaction as their subsequent three games have ended 1-0. The bad news is that only one of those narrow results was in their favour.

Losing to Watford is more than excusable but being beaten by Huddersfield suggests Cocuball might not be the answer.

Nottingham Forest would have parted with him and probably his two immediate successors by now. Evangelos Marinakis is on the fifth permanent manager of his three-year ownership after Sabri Lamouchi lost his opening four league games. Morse code master Chris Hughton has come in – 0-1 v Blackburn and 1-1 v Rotherham – to steady a permanently capsizing ship.

It could be that he delivers the final blow to Cocu’s hopes of revolutionising football in the East Midlands. Mind you, few would bet against the Dutchman losing again on Saturday yet somehow outlasting Hughton. Forest, that.

While Derby travelled to the veritable war zone that is Huddersfield to lose by one goal in midweek, Real Madrid welcomed the similarly stricken Shakhtar Donetsk – who have been unable to play at their home stadium since 2014 due to conflict in the area – a little too receptively on Wednesday.

The Santiago Bernabeu has witnessed away wins for both Cadiz and Shakhtar this past week. Zinedine Zidane might seek solace in the fact Barcelona play Clasico hosts on Saturday.

Neither team is faring particularly well. Real still look blunt without Cristiano Ronaldo and Barcelona were beaten by Getafe last weekend. They are third and ninth in La Liga respectively, Real Sociedad and Unai Emery’s Villarreal putting them both to shame.

At least Zidane and Ronald Koeman can compare iconic European Cup final goals in the dugout. The match itself shouldn’t be too bad either.