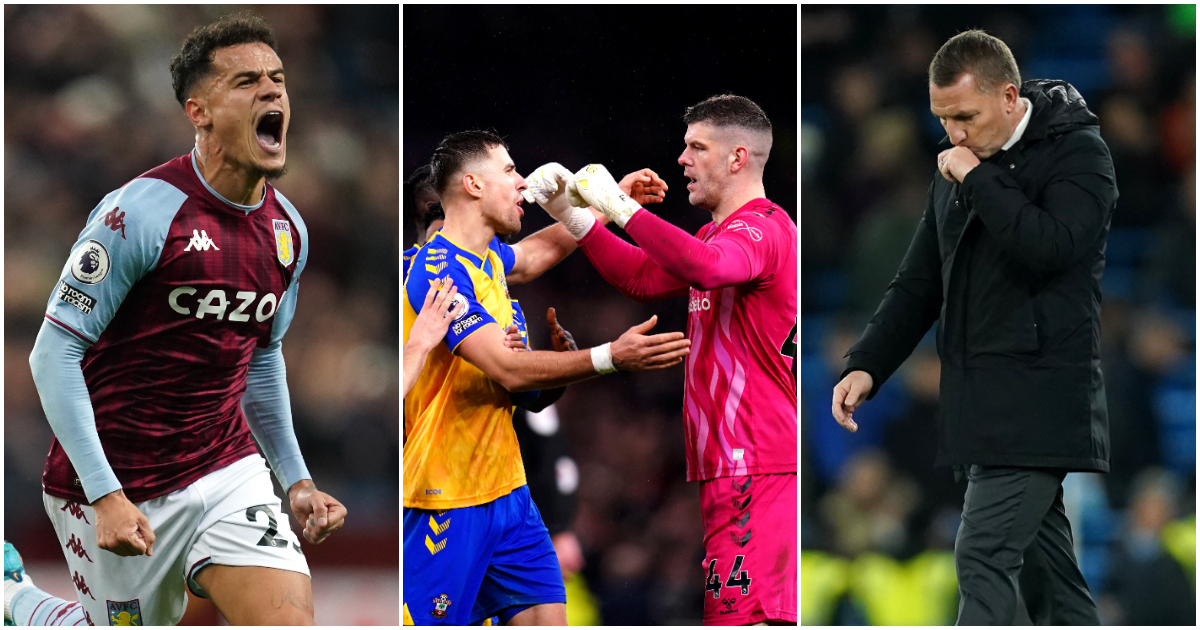 Philippe Coutinho and Brendan Rodgers are back in the headlines together like it’s 2014, while Manchester United v Southampton looks decent.

It’s not really that big, but we’ll all make the best of it, won’t we? Yeah, that’s the spirit.

Game to watch – Manchester United v Southampton
Right, we’d best start with an apology because this Big Weekend is not very big. In fact it’s mainly quite crap. And the one really big fixture on the card is postponed because Chelsea have gone gallivanting off to the Club World Cup as another Arsenal fixture goes on the TBC pile.

But we must work with what we have, and the first game of the weekend on Saturday lunchtime is arguably the most interesting. Southampton, the Premier League’s curate’s egg, appear to be in one of those moments when they’re inexplicably really good. They needed two late goals to beat Spurs on Wednesday night but they were better than their top-four-chasing opponents by an at times startling margin.

Manchester United are currently and notably quite rubbish. Results haven’t fully reflected the rubbishness but they have in their last two games failed to beat Burnley and gone out of the FA Cup to Middlesbrough, so there is some evidence of an overdue convergence between results and performance there. Coupled with Southampton being in one of their Quite Good phases, and suddenly you’ve got a far more interesting prospect than might have been expected a month or two back. We’re not quite sure what Ralph Hasenhuttl’s game is, but he seems to spend all his time appearing to be either the shrewdest manager in the division or the most clueless. It’s a fascinating and baffling gambit. We reckon he’s a good chance of doing an absolute number on Tactics Ralf in this one. Either that, or United win 9-0 again. Which is just as acceptable, frankly.

Ralph Hasenhuttl to consider retiring in 2024? I can’t see it. Not with this much emotion. He loves Southampton. What a mental game. What a win. #SaintsFC pic.twitter.com/CRr8BNQmKg

Player to watch – Philippe Coutinho
What a lovely start he’s made at Aston Villa. The Premier League isn’t supposed to be the natural home for Brazilian maestros, but it very much appears to be the case for Coutinho. He’s still got it and this weekend he takes on newly reinvigorated Newcastle. Their January acquisitions are already starting to bear relegation-dodging fruit and there’s even now a chance that Newcastle fans might actually be able to enjoy the last part of this season and look forward to what could follow rather than spending the whole thing gripped by dread fear of how embarrassing it would be to actually get relegated. That now seems to be Everton’s cross to bear.

Tough task for new-look Newcastle here, though, but what looks a cracking spectacle for neutral. Coutinho v Allan Saint-Maximin is a clash between two of the division’s very finest amusement arcades, and there’s a decent sub-plot here now as well with Ezri Konsa’s suspension likely to mean a full Villa debut for Calum Chambers.

Villa’s defence was not good against Leeds in the week, despite Coutinho’s brilliance at the other end, and taking on ASM and co. is no longer the simple task it once was. This looks the weekend’s most fun fixture on paper and will therefore be the most turgid of 0-0s.

Team to watch – Norwich
Two teams in absolutely identical form clash at Carrow Road this weekend as Norwich, with seven points from their last three games, take on Manchester City. With clearly nothing to separate the sides on current form, we’ve no choice but to delve a little deeper and look at what happened when last this fixture took place in 2019/20. A 3-2 win for Norwich on that occasion, making them worthy favourites to bring Manchester City’s seemingly serene title jaunt to a jarring, juddering halt. Maybe.

Manager to watch – Brendan Rodgers
Has to be under pressure, doesn’t he? Leicester are on a nasty run of results, the league season already a write-off and now out of the FA Cup in embarrassing fashion as well. The safety net of the Europa Conference League currently looks more like just another opportunity for self-inflicted misery rather than welcome distraction.

And why can’t they defend corners? Getting a corner against Leicester right now is not much worse than getting a penalty. That feels unsustainable, and only in part because of the fact it’s a hopeless exaggeration and not remotely true. They are bad at defending, though.

And now they come up against West Ham, who have scored 10 goals in their last three games against the Foxes. Rodgers could be in very serious bother by Sunday evening. It’s a brutal sport, it really is.

Football League game to watch – Huddersfield v Sheffield United
Lovely looking Yorkshire derby to kick off the weekend in the Championship here if the delights of Manchester United v Southampton can’t tempt you.

Huddersfield have been in and around the top six all season without anyone ever really noticing or expecting them to stay there, while Sheffield United are embarking on a textbook late run towards the play-offs after a harrowing start to the season.

They’ve now won eight of their last 10 in the league and although they currently sit 10th, the division is so cat’s arse tight that victory at the John Smith’s would take them sixth and just a point behind Huddersfield before everyone else kicks off later in the day.

European game to watch – Espanyol v Barcelona
Recent formlines are as discouraging as ancient head-to-heads as Espanyol bid for a first La Liga victory in the Barcelona Derby since 2008/09. They’ve lost three of their four league games in 2022 while Barcelona have won three of their four, including a 4-2 sorting out of Atletico Madrid last time out.