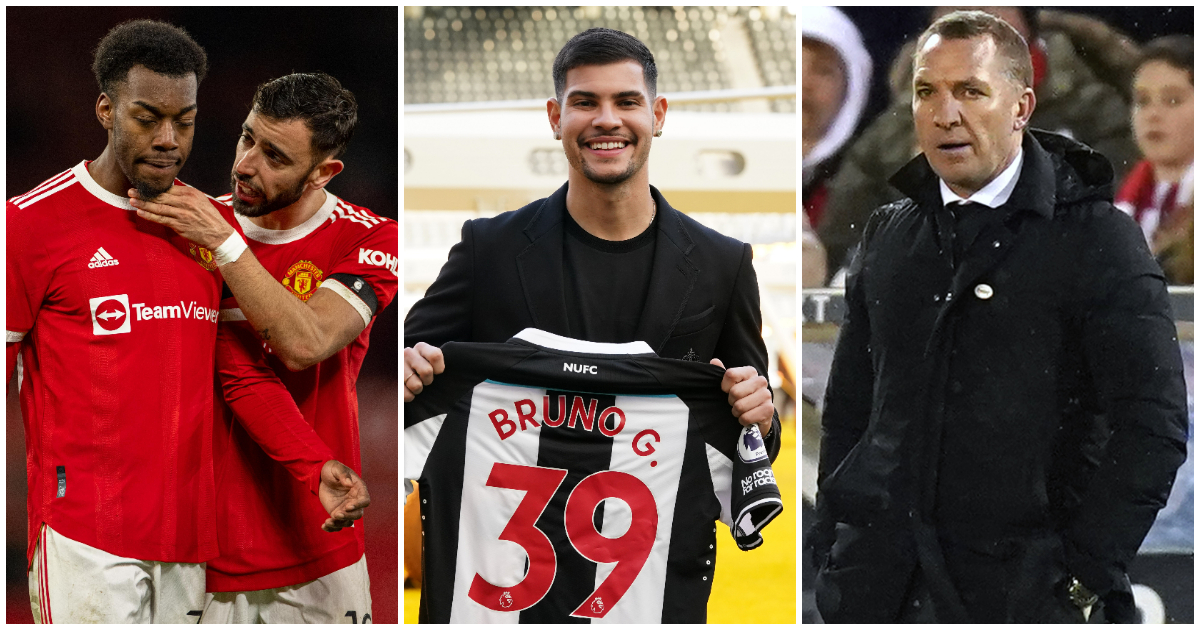 It’s a massive midweek for the new boys involved at St James’ Park, while Brendan Rodgers and Ralf Rangnick both expect – and need – a reaction…

Game to watch – Newcastle v Everton
A relegation battle that really ought not to be takes place at St James’ Park on Tuesday night, though the mood around both Newcastle and Everton is a lot lighter than it has been, despite their perilous positions in the table.

Recognising the danger, both clubs got busy last week, with Newcastle and Everton both making three Deadline Day signings. Yes, we are counting Frank Lampard.

This meeting at St James’ Park could see five debuts on the pitch and one (of sorts) on the bench. Lampard, unable to call upon cup-tied Donny van de Beek and Dele Alli, took charge of Saturday’s 4-1 win over Brentford in the FA Cup, a competition that Everton should regard as a realistic chance of ending their 27-year trophy drought. But the new boss knows he will be quickly judged in the Premier League, with the Toffees five places from the bottom and second-from-bottom Newcastle eyeing the opportunity to rein them in to within a point if there’s a home win at St James’ Park.

The place will be rocking again with Eddie Howe set to select a trio of new Magpies, with Bruno Guimaraes the leading name among them. This will be the first sight of the post-January Newcastle after a window that was expected to be transformative for the prospects of the Toon. It really had to be. Tuesday will offer a glimpse of whether five signings was enough for either side.

Team to watch – Manchester United
The United circus rolls into Burnley on Tuesday night, when Ralf Rangnick will somehow have to rouse a response from his rabble in the wake of their latest embarrassment last Friday.

The Red Devils weren’t all bad while being knocked out of the FA Cup by Middlesbrough. They started brightly and looked comfortably the better team for an hour or so, perhaps assuming that the chances they wasted wouldn’t matter because the next opportunity would be along shortly. Then they conceded an equaliser that ought to have been disallowed and, seemingly wallowing in their self-pity, United wilted.

Their wastefulness in front of goal made for an entirely preventable calamity, which seems to be United’s preferred type of catastrophe. They never miss, though, when pulling the trigger in the direction of their own foot.

So why should we bother? Because somehow, United are are in contention for the top four. They are fourth. And many have them as favourites to stay there. They can’t just write off the season or things will get a whole lot worse in the long run. Which they could yet in the short term if they lose to the Premier League’s bottom-placed side.

Manager to watch – Brendan Rodgers
Leicester were sh*te on Sunday. Even perma-positive Brendan had to acknowledge that while apologising to the supporters for such a meek defence of their trophy.

Rodgers ripped into his flops in the wake of a 4-1 thumping at Forest, with the manager explaining why ‘a lot of these players are not top players’.

“Because they can’t sustain it. I always judge it on the physicality of the team, the pressing, the aggression. When you stop getting it, you can’t quite get there, your time could be up.”

The manager could have been talking about his own position. After a ‘really good two-and-a-half-year spell’, Rodgers needs to prove that he can still captivate this squad. And going after the individuals in his ranks is always a gamble because the modern-day player is not often one that reacts well to criticism or ultimatums.

Which is what they received on Sunday. “There are a lot of these players who, between now and the end of the season, need to prove that they are still worthy of being here,” Rodgers warned.

At least Rodgers knows Leicester can compete with Liverpool. The Foxes won their last two Premier League meetings with the Reds while taking them to penalties in the Carabao Cup, though that defeat came after a surrender from 3-1 up. Rodgers can call upon some players who were rested at Forest, but the overall reaction to the manager’s criticism will be telling.

Player to watch – Philippe Coutinho
The Brazilian has been at Aston Villa for almost a month now but since signing on loan for the rest of the season, Coutinho has been limited to just two appearances totalling 96 minutes.

The visit of Leeds on Wednesday could be when Steven Gerrard decides to unleash the Barcelona loanee. He arrived at Villa lacking match sharpness, which showed in his first start against Everton a fortnight and a half ago. In the meantime, while some of his team-mates have had their feet up, Coutinho has been away with Brazil.

His first match with the national team was ended abruptly after a half hour when Emerson Royal’s red card led to the playmaker being sacrificed too. But his second outing against Paraguay, a 4-0 win, led to another 73 minutes in which Coutinho bagged a beauty.

Will Gerrard trust Coutinho’s fitness in the face of Leeds, arguably the Premier League’s most relentless side? Reports suggest the former Liverpool attacker is refreshed and ‘ready to fight‘. Marcelo Bielsa labelled him ‘a player of prestige’, and it seems likely that still-depleted Leeds will have their hands full with Coutinho, whether from the start, or off the bench.

EFL game to watch – Cardiff v Peterborough
There are full fixture programmes in the Championship, League One and League Two this midweek, and our EFL expert Benjamin Bloom has the relegation clash between Bluebirds and Posh as the game to watch.

Read his Championship Big Midweek preview, with the lowdown on that game, Steve Bruce’s return to management at West Brom and plenty more.

European game to watch – Inter v Roma
It’s a midweek of cup action in Italy, Spain and France, with Jose Mourinho’s first return to the San Siro to face Inter since he left the club in 2010 to join Real Madrid.

Mourinho was seething at the weekend when Roma were denied a late win over Genoa after a VAR intervention. He said of Tammy Abraham’s challenge on Johan Vasquez: “If that’s a foul then we have to call football something else.”

It left Roma down in seventh place, 15 points off Tuesday’s opponents Inter, who had frustrations of their own at the weekend. After dominating the first half of the derby and leading at half-time, they caved to two quick-fire Olivier Giroud goals to give AC Milan a reprieve in the title race.

Lazio make the journey from Rome to Milan to face the Rossoneri in the quarter-final on Wednesday, with Atalanta versus Fiorentina and Juventus hosting Sassuolo on Thursday.