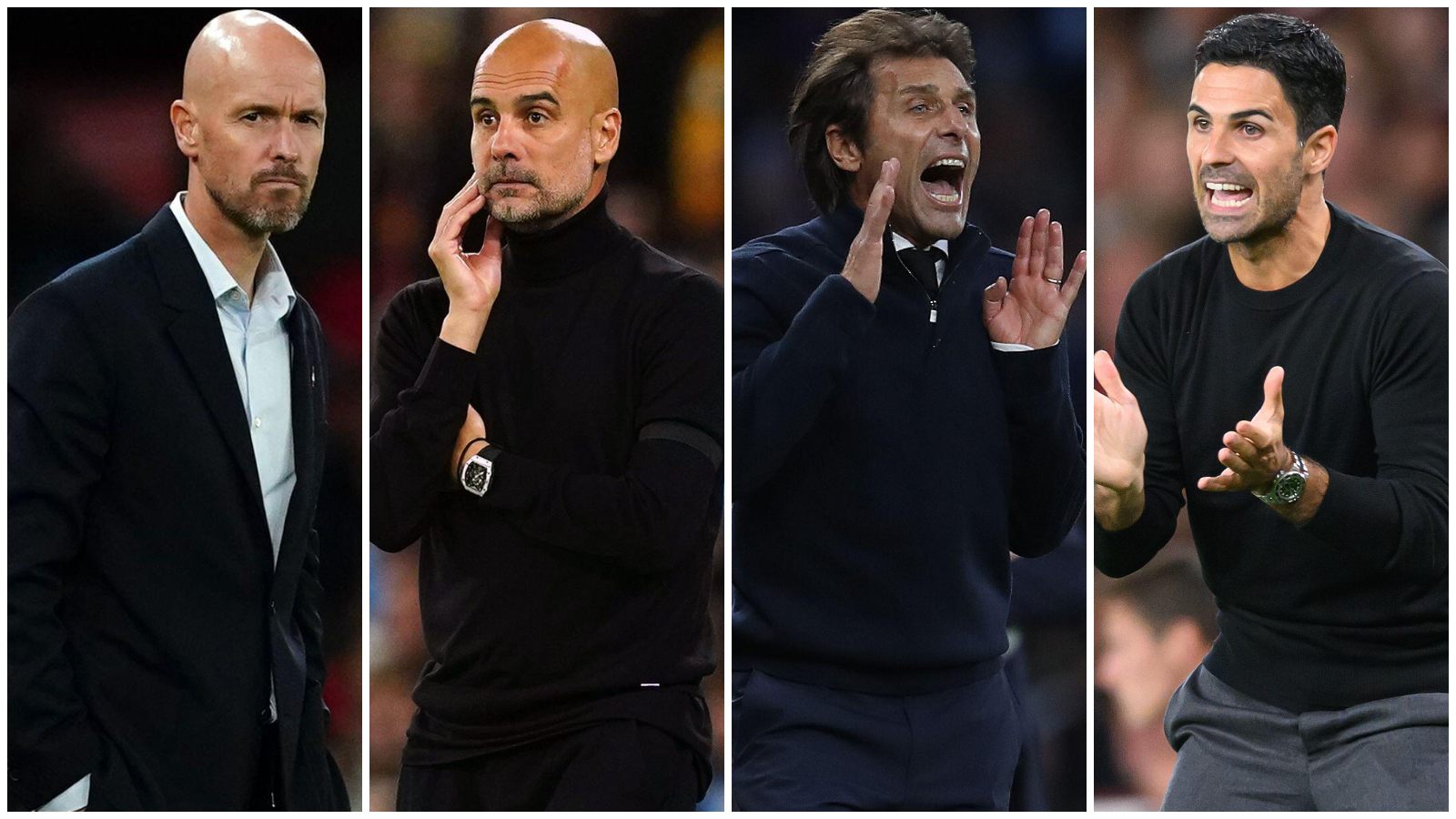 It a huge weekend in north London and Manchester. It’s also a biggie for David Moyes as pressure builds at West Ham, and Gareth Southgate’s least favourite right-back…

Game to watch – Arsenal v Tottenham
Are Arsenal still pretenders or actual contenders? And what do we really think of Tottenham?

Everything we know of Arsenal tells us they will blow up. This what they do – tease us with glimpses and the occasional streak of real quality, then conspire to sh*t their beds. But right now, there is a nagging feeling that this time, it really might be different.

Their perfect start was brought crashing to a halt by Manchester United at Old Trafford when Mikel Arteta’s gung-ho approach backfired spectacularly. The old Arsenal would have then gone to Brentford and disappeared up their own arses; this one bounced back with impressive and strangely unfamiliar authority, even while playing an actual schoolboy. The mood around the Gunners is buoyant and the sceptics are starting to believe.

Victory in the derby would offer compelling evidence that Arsenal are indeed the real deal. All they have to do is turn over a Tottenham team that looks just as likely to p*ss on the Gunners’ chips as roll over and have their bellies tickled by their neighbours.

We’ve seen plenty from Spurs to suggest that they too could sustain their early-season form for long enough to do more than linger around the cut-off line for a Champions League place. But this is the real test: winning at Arsenal for the first time in a dozen years.

Team to watch – Manchester United
Change might not be occurring fast enough for some United fans but a quiet revolution is taking place at Old Trafford. The team-sheet from Sunday’s derby and that from the last meeting of Manchester’s finest is proof of that.

Another indicator is the fact that we pretty much know what to expect from the Red Devils on Sunday. Erik ten Hag seems to have settled on side and system so, unlike previous years, there will be no radical changes when United go across town. No flitting to a back-three; no experiments with false nines; no more flinging sh*t at the City wall in the hope something sticks.

Only injury will make Ten Hag veer from his settled back four of recent weeks, and despite the availability of Casemiro, it will almost certainly be Scott McTominay and Christian Eriksen at the base of the visitors’ midfield. Casemiro won’t stay on the bench for much longer, but the derby isn’t the time to bed in the Brazilian.

Casemiro will be sat next to Cristiano Ronaldo, whose absence so dismayed United fans the last time they trekked across Manchester. Back then, so woeful was Marcus Rashford’s form, Ralf Rangnick preferred an absurd combination of Paul Pogba and Bruno Fernandes playing as interchanging false nines. Now, though, the preference would be to keep Ronaldo on the sidelines and let Rashford continue to build some momentum.

For all Ten Hag’s good work, if City turn it on, they could still embarrass United. But last season, the most humiliating aspect was not the two results but the ease with which they were achieved. In neither game did United fans expect anything but a hard time at work on Monday. Now they go to the Etihad with hope of something more than damage limitation.

Manager to watch – David Moyes
International breaks are there for all of us to endure but the one just gone was a window to unemployment for some managers. Premier League clubs – those that hadn’t already made a change – held their nerve, in the odd case because they couldn’t afford to do anything else. But that doesn’t mean the danger has passed for under-pressure managers.

One of them is Moyes. Despite overachieving over the last two seasons with West Ham, the Scot is back in familiar territory of scrapping for his job.

That’s according to a number of reports this week that state that while the Hammers aren’t yet panicking after collecting only four points from their first seven games in the wake of being the summer’s third-highest spenders, they are bracing themselves should their results and league position fail to improve in the coming weeks.

The Telegraph says Moyes has four games to stop the rot, starting at home against Wolves on Saturday evening. What might he do to change their fortunes? Playing his new £30million star striker might be a start.

Gianluca Scamacca has started only one game so far this season – coincidentally the one game West Ham have won – as he looks for his first Premier League goal. Scamacca has bagged three in the Conference League, matching the Hammers’ collective domestic haul. After proving to be a handful against England last week, Moyes might struggle to justify why the Italy international remains on the bench should his side’s goalscoring woes continue against a side that prior to meeting Man City and Erling Haaland had the joint-best defensive record in the league.

One of the major themes of the international break has been Gareth Southgate’s opinion of the Liverpool right-back. In short: the England boss doesn’t fancy him.

Many pundits simply can’t fathom why Southgate doesn’t want a defender who isn’t very good at defending in a defence that is already creaking. Some seem to view it as a sackable offence.

Regardless of which side of the Alexander-Arnold debate you stand – it absolutely cannot be towards the middle – we all know the next chapter of this particular story. The Liverpool star will go peak-Cafu against the Seagulls, probably assisting and maybe scoring, to whip up his advocates to the point of frenzy.

None of that would come as a shock to Southgate or anyone else. The England boss will be looking – if he’s even still interested – for how he balances his attacking role with his defensive duties in stopping a dangerous Brighton side, currently four places and four points ahead of Liverpool, keen to impress their new manager.

EFL game to watch – Stoke v Watford
Watford rarely miss an opportunity to change manager and the timing of the international break was just too perfect to ignore. So out went Rob Edwards and in came Slaven Bilic in time for a Sunday lunchtime trip to Stoke.

The Hornets’ fifth manager in 12 months takes over in 10th place after three wins and five draws. Only three sides have lost fewer matches so far this season but Watford apparently felt like they were losing ground in the promotion race. They are just a single point off the play-off places though a dozen other sides are within a win of the top six in a ridiculously congested table.

The Potters are one of those teams, themselves looking up from 14th. Stoke pulled the trigger even earlier than their visitors and Sunday is Alex Neil’s fifth game in charge after overseeing a win, a defeat and two draws. It has been seen in the Potteries as a positive start and the visit of Watford is eagerly anticipated after Neil has had a fortnight on the training ground to stamp his make on Stoke.

European game to watch – PSG v Nice
Despite intense speculation around Lucien Favre who, like Edwards, was appointed in the summer, Nice managed to avoid the temptation of making another change during the international break. Though perhaps they might have had Mauricio Pochettino fancied the gig.

Favre is under pressure after Nice collected eight points from eight games to leave them down in 13th place. They go to PSG on Saturday night to face one of the most in-form sides in Europe and Neymar, the player with the most goal involvements in Europe’s big leagues.

It is the kind of game for which Nice bought Kasper Schmeichel in the summer but the Denmark keeper has made a poor first impression on his new side. Apparently he turned up overweight and went running to Jim Ratcliffe when he was left out of the side for the opening game of the season, a few days after he arrived. Grassing on Favre seemed to work as Schmeichel was in the sticks for the next six games before being sat back on the bench for the last game before the break – a 1-0 defeat at Angers.

Schmeichel was perched next to Ross Barkley while Aaron Ramsey was missing through injury. The Wales star might be back for the trip to Parc des Princes, though with the World Cup looming you can bet Ramsey won’t rush back for his new side.