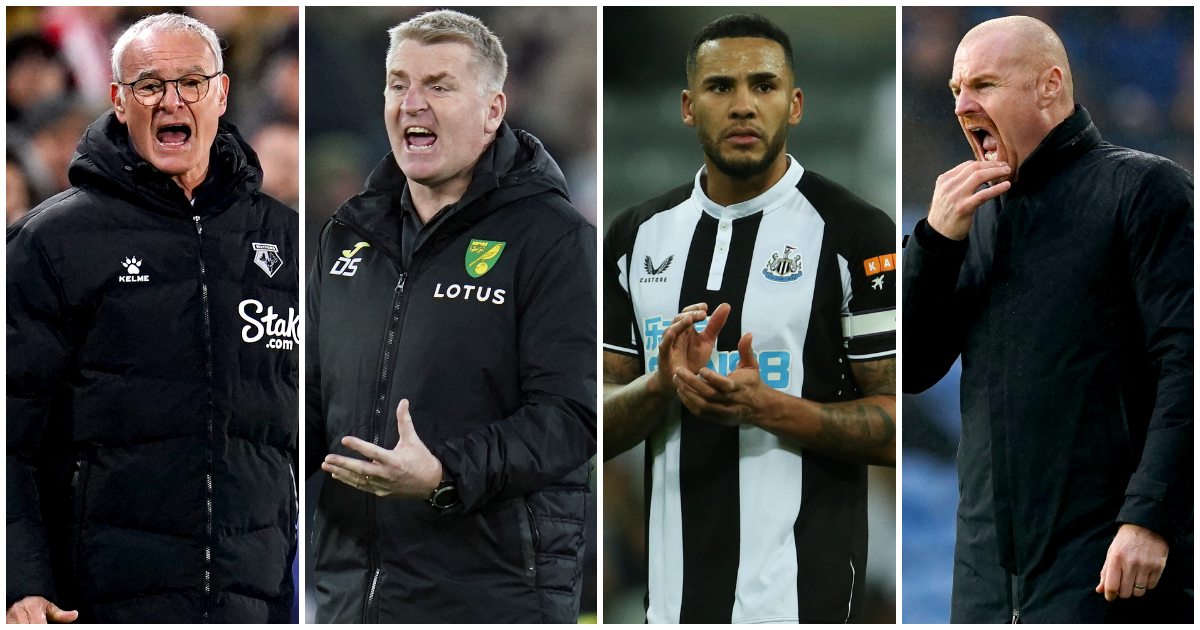 Four of the bottom six face each other in a huge weekend in the Premier League relegation scrap. For Burnley, it’ll be a novelty just to play.

Game to watch – Watford v Norwich
This weekend’s Friday Night Lights come from Vicarage Road where Watford and Norwich will likely soil themselves through 90 minutes in the hope of ending it outside the relegation zone.

That Norwich could move out of the bottom three with consecutive victories is quite something for Dean Smith’s side. When discussing the relegation fight, most people had discounted the Canaries and many would still have them as favourites to go down. Their position may be falsified slightly by the fact they have played more games than anyone around them – Burnley have played four fewer – but games in hand are considerably less use than points in the bank.

For Norwich, the incentive is clear and the opportunity to leapfrog the Hornets and go above the cut-off has to serve as a spark for the rest of the season. For Watford, their motivation comes in the prospect of moving four, five and six points ahead of the Canaries, Newcastle and Burnley respectively.

The Hornets were due to face all three in what could have been a season-defining week. The postponement of their trip to Turf Moor has made it rather less so, and a draw with Newcastle offered little clarity – even if a point was more useful to Claudio Ranieri than Eddie Howe.

The way in which it was earned can be a springboard for Watford. Joao Pedro’s 87th-minute header deflated the Toon as much as it elated the Hornets and was deserved reward for a stoic performance at St James’ Park where a previously porous Watford defence, last week reinforced by two debutants, restricted Newcastle to just a single shot on target.

A reversion to the type of defending that prompted a run of seven straight defeats prior to the trip to the North East could have greater ramifications than simply a drop in the table. Ranieri’s job remains on the line and a buoyant Norwich side could cause chaos at Vicarage Road.

It might not be absolutely must-win for either Watford or Norwich but it certainly remains a panic-inducing six-pointer.

Team to watch – Burnley
The Clarets’ game of catch-up commences at Arsenal on Sunday, when Sean Dyche will send his side out to play only their third Premier League match in 42 days.

The postponement of Watford’s visit on Tuesday was the fourth game Burnley have seen rescheduled since December 12, adding to the Spurs visit in November that was snowed off. Their inactivity has seen Dyche’s men fall to the foot of the table, with the bottom-placed side having played five games fewer than the leaders.

All of it promises a fraught second half of the campaign for Burnley, before which Dyche has to find some creativity from somewhere to serve a goalscorer he no longer possesses after the sale of Chris Wood.

It will be fascinating to see their approach at the Emirates. Dyche may see simply fielding a team as a triumph, but the Clarets have to find a way of causing Arsenal a problem as well as restricting their hosts. In the two games they have played since December 12, Burnley were beaten 3-1 in both at United’s Manchester and Leeds. In the defeat at Old Trafford, Burnley appeared very much to have an eye on the Elland Road visit, only to suffer a similar defeat. Staring up at the rest of the Premier League, Dyche cannot afford to be so picky over where he sources his points.

There is no expectation on Burnley to beat Arsenal, but amid concerns over the financial state of the club and a lack of January reinforcements, Dyche needs to offer some encouragement to the travelling Clarets.

Player to watch – Jamaal Lascelles
A difficult week for the Newcastle captain isn’t likely to get any easier when the Magpies go to Elland Road on Saturday.

Lascelles has endured a torrid season which was summed up by his performance in Newcastle’s morale-sapping draw with Watford last weekend. With a one-goal lead to defend – something they have proven incapable of doing – the Toon looked terrified, with their skipper seemingly panicking the most.

He had already got away with one mistake which presented Moussa Sissoko with a sitter, but it was Lascelles who was bullied in the air when Pedro headed in Watford’s late equaliser.

The days since have seen Newcastle scramble around for a centre-back, with some fans calling for Federico Fernandez to replace Lascelles if Howe doesn’t get a defender through the door before Saturday, which looks increasingly unlikely.

Howe will most likely stick with Lascelles for now, but having watched his club spend the week desperately trying to replace him, the under-fire captain has to recover some composure to stand in the way of a side Declan Rice described last Sunday as “the toughest team to play in the Premier League”.

Howe has presumably learned he cannot rely on Lascelles long-term, but he needs his captain to lead at Leeds.

Manager to watch – Duncan Ferguson
The end of the Rafa Benitez error came in the wake of Everton’s miserable defeat to Norwich last weekend. Now Big Dunc gets another crack at leading the Toffees. For how long remains unclear.

Ferguson’s first assignment of his second caretaker reign is to welcome Steven Gerrard back to Merseyside when the Liverpool legend brings his Aston Villa side to Goodison Park at Saturday lunchtime. Rafa’s exit, Ferguson’s temporary promotion and Gerrard’s mere presence will prompt a far more supportive atmosphere at Goodison, but Gwladys Street will expect a swift and dramatic improvement now the primary reason for their miserable season so far is no longer in charge.

Ferguson has begun the quest for that improvement by telling the Everton players “a few home truths” this week – one suspects they will have listened. But the Scot showed in his first caretake spell in 2019, when he galvanised the Toffees with a win over Chelsea in his opening game followed by draws with Manchester United and Arsenal, that he can dangle the carrot, too.

Back then he was an animated presence on the touchline and Ferguson promises to be the same again, in stark contrast to Benitez’s more passive persona. The caretaker boss may only be in charge for ‘the upcoming games’ but with few candidates currently available, the visit of Villa and Philippe Coutinho is the first stage in his audition for the gig on a longer-term basis, at least until the end of the season.

European game to watch – AC Milan v Juventus
The continent’s most eye-catching clash this weekend sees in-form Juve go to a Milan side reeling from a wonderfully mental defeat to Spezia on Monday.

Milan had the opportunity to leapfrog Inter at the top of the table but Stefano Pioli’s men fell in controversial circumstances, leaving them in second, looking over their shoulder at Napoli behind them. Milan can ill afford another defeat, with the derby coming up next.

Juve are off the pace in the title race but the Old Lady has recovered from a poor start to sit a point off Atalanta in the race for the last Champions League spot after a run of eight games without defeat. Atalanta travel to Lazio on Saturday night if you’re at a loose end, but Milan v Juve is certainly worth ignoring your family for on Sunday night.

EFL game to watch – Nottingham Forest v Derby
The Brian Clough Trophy and East Midlands bragging rights are up for grabs at the City Ground on Saturday lunchtime when Wayne Rooney takes his resurgent Rams along the A52.

Benjamin Bloom has that, and plenty more besides, covered in his Championship Big Weekend.