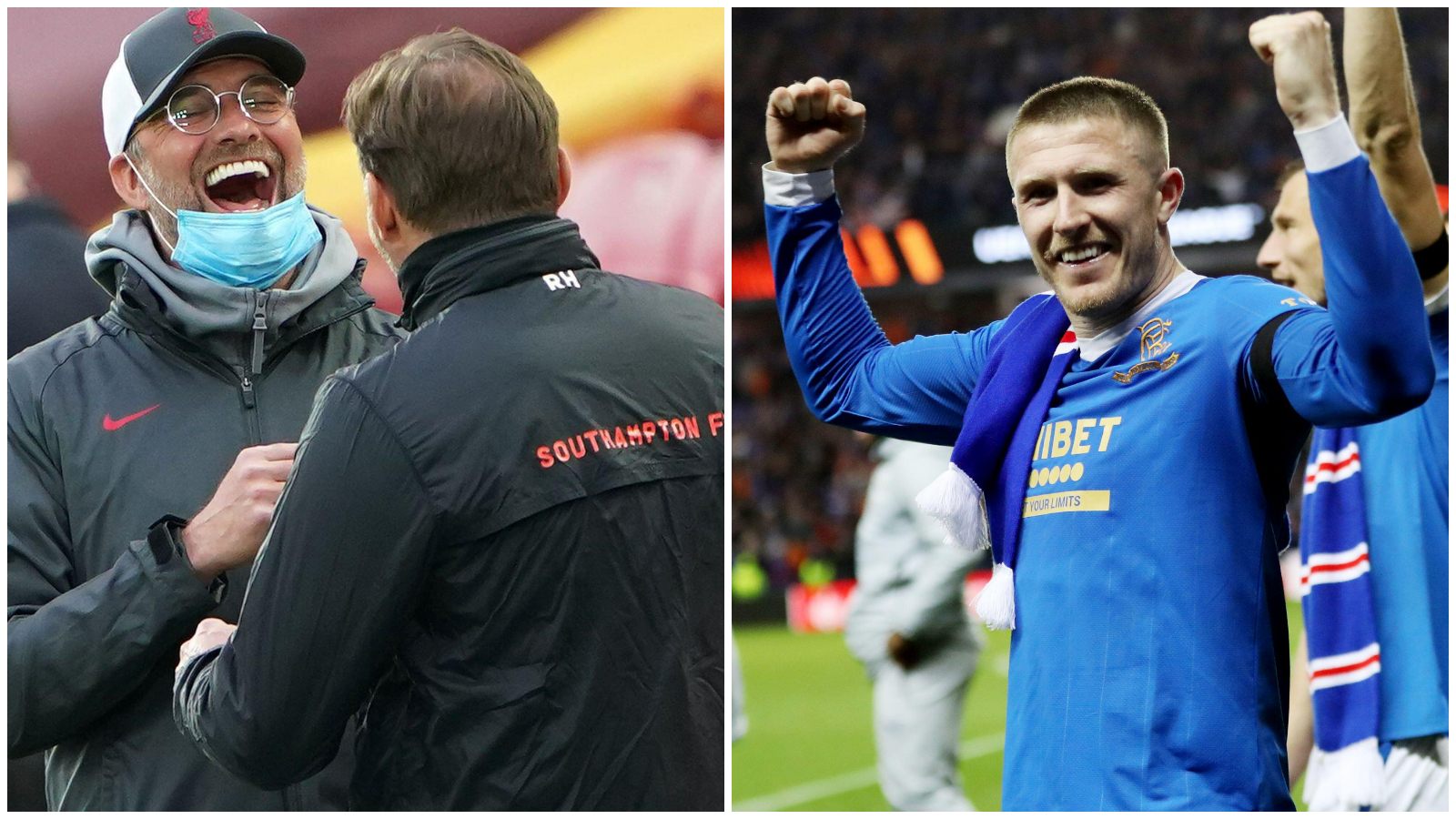 A massive midweek shapes how super-mega-huge the weekend will be as the Premier League title, top four and relegation races approach the line. For Rangers, it’s all about Wednesday…

Game to watch – Southampton v Liverpool
Manchester City teased Liverpool by dropping points at West Ham on Sunday but it won’t matter if the Reds don’t go to St Mary’s on Tuesday night and take all three.

On paper, that shouldn’t be a problem. Liverpool are steaming towards a possible Quadruple, while some Southampton fans have had enough of Ralph-ball and were last week calling for Hasenhuttl to be sacked. But, as Klopp has been very keen to stress, Liverpool played 120 exhausting minutes on Saturday evening and changes will have to be made.

Freshening up his side means Liverpool forfeit the advantage of rhythm that non-stop football might give them. Even before he considers rotation, Klopp will have to cover for Virgil van Dijk, Fabinho and Mo Salah, with two injured at Wembley and the other already sidelined. As strong as Liverpool’s squad is – however the manager opts to replace that spine – it will absolutely be weakened.

But it is hard to envisage a team which Klopp might realistically select that wouldn’t be strong enough to brush Southampton aside. Saints have lost seven of their last 10 and won only once since March 3. The final week of the season is ripe for a madness, but even Hasenhuttl will struggle to make a case for his side doing City a favour.

And we don’t really want them to anyway. Only City fans – and most United ones – want Liverpool to p*ss away a final-day climax by slipping up at St Mary’s. It will be fascinating to see what level of hangover, if any, the Reds take from the weekend, but unless Liverpool turn up with eyes like p*ss-holes in the snow, carrying a McDonalds and a Lucozade, they should be just fine.

Manager to watch – Thomas Tuchel
Chelsea have an extra 48 hours to get over their hangover, which is unlikely to manifest itself physically unless they drowned their sorrows at the weekend. But they will carry a hefty burden of regret into the last week of the campaign, meaning Tuchel must lift his players out of their funk to avoid the end of their season slumping harder than it already is.

The Blues could yet relinquish third place. Granted, that looks unlikely since on the final day they welcome to Stamford Bridge a Watford side – and manager – who have already checked out for the season.

Chelsea can make that game a dead rubber by beating Leicester in midweek, something Tuchel’s men achieved after last season’s cup final in a crucial game for their Champions League prospects. The Blues also had the Champions League final to look forward to at that stage last term; this year Chelsea just want to consign a season of upheaval to the history books.

It has hardly been a season to remember for Leicester either but Brendan Rodgers is attacking the final few games with his focus firmly on next season. He has tried different shapes and on Sunday he omitted Kasper Schmeichel for the first time in four years. The message is that Foxes are fighting for their future and the performance at Watford – leaving aside set-piece defending – suggested the penny has dropped.

Any lethargy could be punished by Leicester. Assuming he cares about the difference between third and fourth, Tuchel needs to rouse his troops to avoid a potentially awkward final day.

Team to watch – Everton
However you rate Frank Lampard’s Everton, they have been an entertaining watch of late. Not always for reasons that will cheer the manager, but there has been some encouragement for Lampard to cling to.

They host Palace on Thursday night with another opportunity to preserve their Premier League status and excuse themselves from the final-day scrap at the foot of the table. They could have done that by beating Brentford on Sunday, which many expected, given how their home form contrasts so wildly from their wretched fortunes on the road.

But Everton shot themselves in the foot against the Bees. As Lampard said, Jarrad Branthwaite’s early red card changed the game but the Everton defender could have no one to blame but himself for a poor lapse in concentration. If Branthwaite was naive, Salomon Rondon was stupid to fritter away what hopes Everton retained of an equaliser when he rounded off a four-minute cameo with one of the strangest impressions of a tackle all season.

So to Palace the focus turns, and Evertonians will doubtless do their bit one last time. But few getting to Goodison in good time to welcome the players will trust those they cheer off the coach to get the job done in a manner that won’t prompt arses to nip on the Gwladys Street.

The last time they faced Palace, Lampard bemoaned a lack of ‘b*llocks’ in his squad after a dismal 4-0 humping in the FA Cup. The manager can only hope his players have found them by Thursday because passing up this chance could leave their Premier League status in peril when they go to Arsenal on Sunday.

🥴 Most errors leading to an opposition goal in the Premier League this season:

Player to watch – all those playing for Burnley
We can’t ignore the Clarets this week (though we often try) so we’re quite shamelessly shoehorning them in here. And picking out individuals isn’t really what Burnley are about anyway.

Mike Jackson’s men traded places with Leeds on Sunday after losing at Spurs prior to the Yorkshire side’s last-gasp point against Brighton. But Burnley can swap again if they get something at Aston Villa.

Four points from the six they will battle for at Villa Park on Thursday and against Newcastle on Sunday will be enough to survive, which means they cannot suffer a repeat of the 3-1 defeat they suffered at the hands of Villa only last week.

There were reasons to be positive after losing to Tottenham, which came as a consequence of a dubious handball decision. Ashley Barnes’ handball was a penalty but it really shouldn’t be. It proved to be the difference after a performance that warranted more for Burnley.

Jackson switched his formation for the trip to Spurs and the Clarets looked comfortable with three centre-backs. That shape matched Antonio Conte’s so it remains to be seen whether Jackson will revert to 4-4-2 when they seek revenge against Villa.

European game to watch – Eintracht Frankfurt v Rangers
As you read this, half of Glasgow is making its way to Seville for the Europa League final and all leave for Andalusian street cleaners has been cancelled.

In their first European final since 2008 when Manchester hosted between 200,000 and half a billion Glaswegians depending on who you believe, the Gers meet Eintracht Frankfurt, who haven’t reached this stage since winning the UEFA Cup in 1980.

Frankfurt fans can give their Gers’ counterparts a run for their money when it comes to travelling armies. They took over the Nou Camp at the quarter-final stage, where Barca suffered a defeat embarrassing for a number of reasons.

Rangers, though, have no reason to fear German opposition. On the way to Seville, they have disposed of Borussia Dortmund and in the semi-final, RB Leipzig were dealt with. However, Frankfurt have had their eyes on the prize perhaps for longer than Gio van Bronkhorst’s side. They have won only three of their last 14 games, with all of those wins coming in the Europa League. Domestically, they’ve been a mess and winless in eight.

The carrot for both – shiny pot aside – is a place in next season’s Champions League. It’s been 11 years since Rangers saw the group stage, but not since 1960 when they were schooled by Puskas and Di Stefano and battered 7-3 by Real Madrid at Hampden have Frankfurt been involved in the European Cup. For both sides, this is a pinnacle, which makes it well worth tuning in 7:45pm on Wednesday.

EFL games to watch – Nottingham Forest v Sheffield United
The Blades are fortunate still to be in with a realistic prospect of joining Huddersfield after their first leg against Forest on Saturday. At Bramall Lane, the hosts seemed to forget how to defend but Forest let them off the hook. Sander Berge’s injury-time header to cut the deficit in half puts Tuesday night’s return at the City Ground back on a knife edge which, like most facets of the play-offs, is great for you and I but terrifying for Forest and United fans.

On Wednesday and Thursday, the League Two play-off contenders wrap up their semis with both of the first-leg hosts taking a 2-1 lead into the away tie. Northampton host Mansfield on Wednesday before Swindon go to Port Vale the following night.